We woke to beautiful blue sky this morning...but wind was the order of the day...and windy it was!  There is also a cooling trend on its way for the next week which is very unfortunate for the rally...at least no rain is forecast (other than a 20% chance of showers tonight), just temps around 57F/14C to 63F/17C but it's supposed to be sunny! 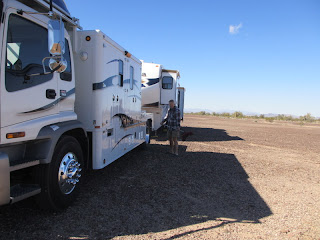 Mid-morning, Steve decided to go out and dust the trailer and truck...just in case it does rain.  He's trying to keep the rig clean as long as possible after we had it washed and waxed back in Indio.  It was warm on the sunny-side of the trailer but chilly in the shade...especially with the wind. 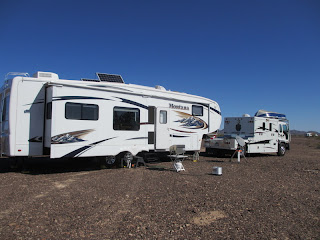 Once Steve had finished dusting, we headed into Quartzsite...we needed to fill our propane tanks.  Because The Pitstop only accepts cash, we had to stop at the bank ATM first.  We saw Dave and Diane's motorcoach at The Pitstop as we passed but they had already left by the time we got there.  Hopefully they don't have any trouble finding us off Plomosa Road. 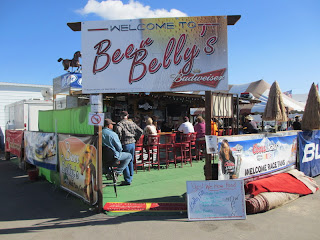 After getting the propane we decided to go and check out the vendors along Kuehn Road.  The big RV show is over but there are still lots of vendors around.  We wandered around for a bit and then decided to go to Beer Belly's Adult Day Care for a beer and lunch...

We had a beer and a "so-so" bite to eat while listening to a good Country Singer...Duke Michaels from Nashville. 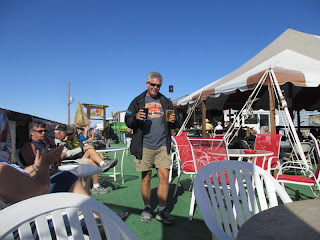 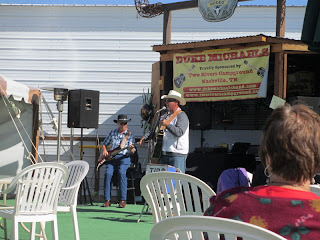 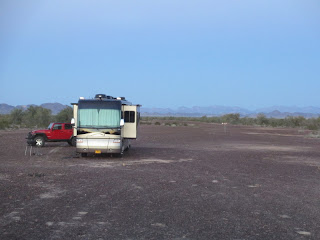 We got back to the trailer at about 3:00...yup, Dave and Diane had found us and were set up.  We walked over and said hello and then returned to the trailer to take care of some emails.  At 4:30, Steve walked over to invite them over for happy hour while I prepared some appies.

Dave and Diane are from Grant's Pass, Oregon and have been full-timing since last November.  They have a beautiful Golden Retriever named Jack...think I'm gonna have to get my "fix" over the next week!  After a great visit with them, they headed out into the wind to find their way back to their place...gets pretty dark out here!

Posted by Dianne and Steve at 7:53 AM