We left Meteor Crater RV Park just before 9:00 a.m. this morning.  Although a chilly morning, the wind had finally died down and there was some sun peeking through broken clouds.  However, as we headed west on I-40, there were dark ominous clouds looming over the mountains (that had a fresh covering of snow on them)... 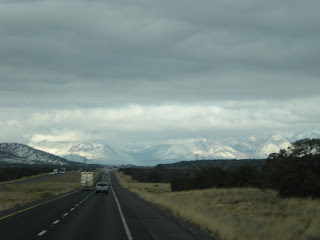 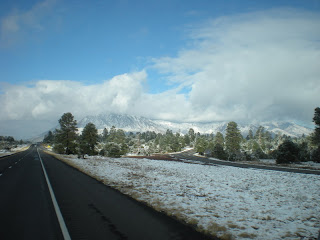 We were well into the snow-covered countryside as we entered Flagstaff, just 37 miles west of Meteor Crater.  Luckily, the roads were clear though...but more snow was predicted for this afternoon. 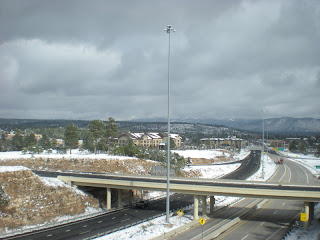 Once in Flagstaff, we took the exit to I-17 South...and I thought the snow-covered countryside would gradually disappear...but not so, the snow got thicker!  As we continued south...still snow!  We had about a half hour before we were to exit the Interstate and head west to Cottonwood and there was still snow so I said to Steve, if there is still snow by the time we are to turn off the freeway, let’s keep going south! 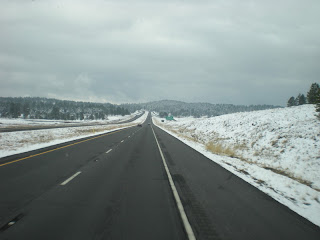 However, it wasn’t much further before there were signs advising of a steep downhill grade...oh, yay, we are finally going to get out of these mountains...and snow!  We stopped at a view point (that also served as a brake-check place for trucks) before continuing down the mountain... 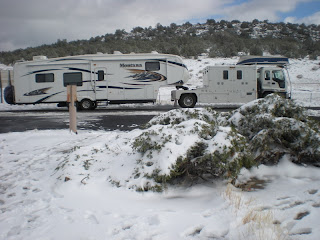 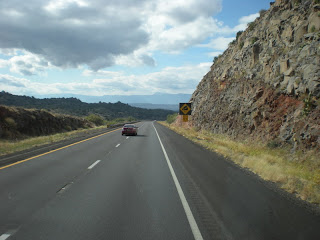 Whew...all is good...we are out of the snow!  We arrived at Dead Horse Ranch State Park, on the outskirts of Cottonwood, just after 11:00 a.m.  We were assigned site #100, a 65 foot pull-through with water and 50 amp power...but no sewer.  There looks like a lot to do and see in the area so we decided that we would stay a week...at least we paid for a week and should we change our mind, the attendant assured us we would be refunded.


We made our way to our site and got unhitched and all set up.  Steve was pretty smug with himself...he managed to get a satellite signal right away...without having to tune it in.
It wasn’t a particularly nice day out so we ended up spending the afternoon inside watch concerts on TV...Foreigner, Styx and The Doobie Brothers...now that was a very relaxing afternoon!
It’s supposed to rain tonight and tomorrow morning...and then clear up.  Sure hope it warms up...we have lots of exploring to do!
Posted by Dianne and Steve at 3:24 PM