We were outside shortly after 9:00 Friday morning...Dave and Leslie were all packed up and ready to go. So with big hugs, we said goodbye...it was so nice having you join us here on the desert!

Shortly after they left, we were on our way to Parker. The battery on our laptop is still acting up, so we again took it back to Click It Computers. Luca discovered that we had the wrong power cord...hmmm, they must have given us the wrong one back when they had it previously. He couldn't find it so he ordered a new one and it will be in on Monday. That means another trip to Parker. We have our doubts as to whether that is really the issue...we will see.

We went to Strokes for an early lunch...and then after a stop at Walmart, CSV Pharmacy and Spanky's Marine Supply, we were on our way back home.

It was another very windy day today, so Steve positioned the truck as a wind block and we sat outside for happy hour. Earl, Allison, Red, Pam, Mike, Dawne, Gary and Deb joined us. More folks are leaving tomorrow...yes, the exodus continues! And with Roger and Cindi leaving Monday, there will only be Red/Pam, Colan/Marilyn and us left here

Saturday (Mar. 9) morning we waved goodbye to Earl and Allison as they pulled out bright and early...safe travel home and we'll see you this summer! A little later, we were out saying goodbye to Mike and Dawne, and Gary and Deb. We hope to see Mike and Dawne in a couple of weeks as we head north. They have invited us to stop for a visit in Hillsboro, just outside of Portland.

After big hugs to them, we continued on our walk...I haven't been able to keep up with my walking as much as I want because of my left knee.

Back home, we had breakfast and then I cleaned up while Steve filled our fresh water tank. After that, he settled in with the laptop and edited pictures. I did some baking and then sat outside knitting...and that was our day!


Sunday (Mar. 10) morning we did our resistance exercises and then I got out for a 2 mile walk. I'm concentrating on not favouring my left knee and limping. It's hard but the longer I walk, it seems to get better...however, I will likely pay for it the rest of the day.

Steve got out early while the wind was calm to fly his glider and then worked on his broken plane. At about 12:30, he headed out to meet Red at the RC hanger. On his way home, he got drinking water, propane and gas.

While he was gone, I did some housework, worked on the next blog update..and putter around doing a little of this and a little of that.

When Steve got home, he worked some more on his RC plane and then took it over to Red's to get help and uses some of his tools. I sat outside with my knitting...unfortunately, clouds had come in and the wind had picked up.

At 4:00 Pam walked over with her martini and shortly after that, Roger and Cindi drove up. They are all packed up and ready to head out in the morning.  Steve and Red came back to our place, but continued working on the plane while the rest of us sat chatting. Finally the plane was all fixed and they joined us.

With happy hour over, we said goodbye to Roger and Cindi...great spending time with you! Safe travels and we look forward to seeing you next year!

We were both wide awake early Monday (Mar. 11) morning...finally deciding to get up just before 5:30. The day started out with clear blue sky but by the afternoon, clouds had come in.

Steve took his repaired plane out back to the open desert to give it a try...it flies fine! Yay! After that he finished another batch of pictures and I got another blog done.

As our time here is quickly going by, it's time to get a little maintenance done...so Steve decided to install the new outside vent. This is the second time the vent flap has broken. He also has a few other items on his "to do" list before we leave. 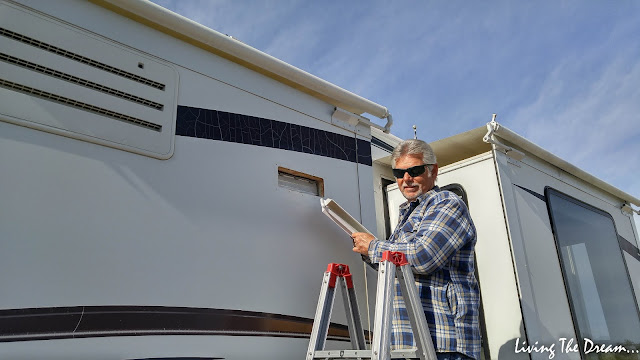 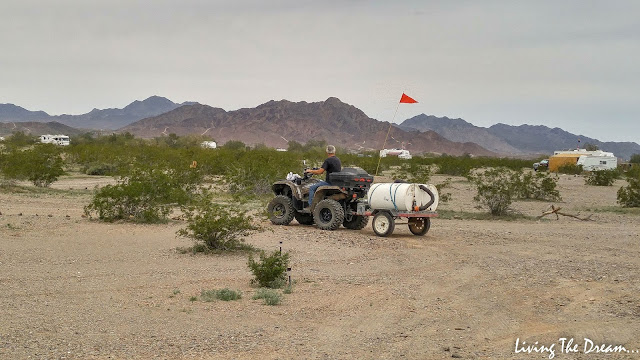 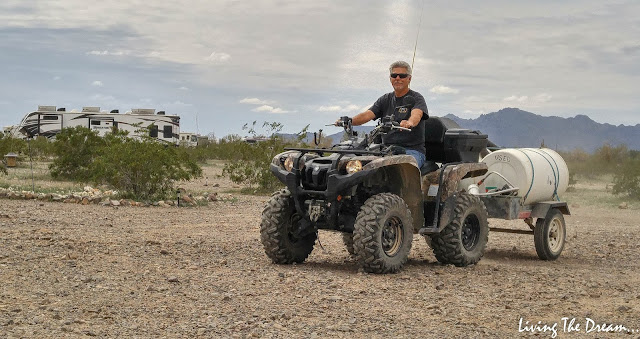 By late afternoon, the rain had started and it poured! Red and Pam came over for dinner...

Followed by a few games of Rummikub... 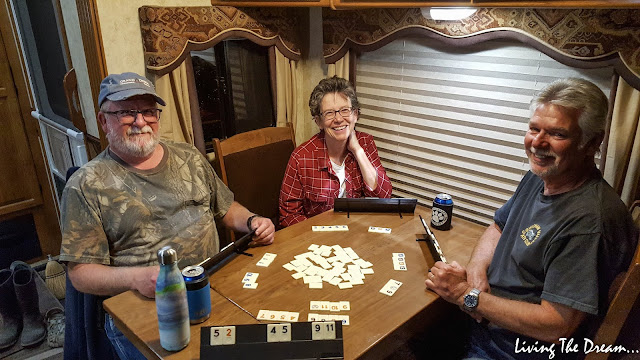 We called it an evening around 8:00...a great evening with good friends; so good spending time with Red and Pam!

Tuesday (Mar. 12) we woke to the steady pitter-patter of rain on the roof...and it continued raining all morning. 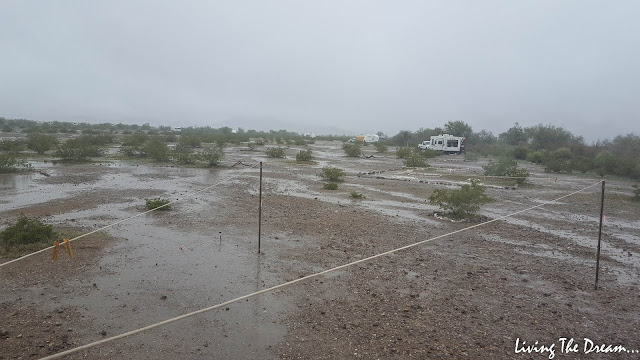 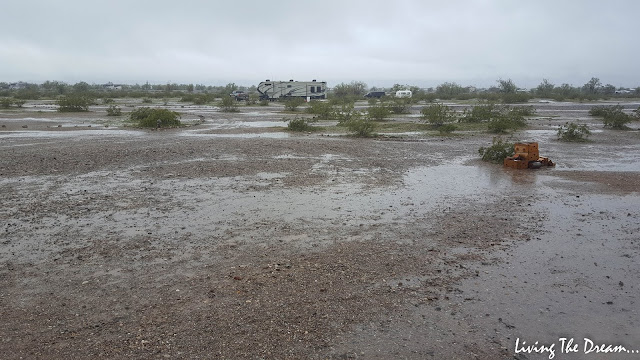 Steve headed out with Red at 9:30 and I didn't see him until about 3:30...they spent the day at the RC hanger. Red has been learning from Jim and helping out rebuilding some of the club members crashed planes... 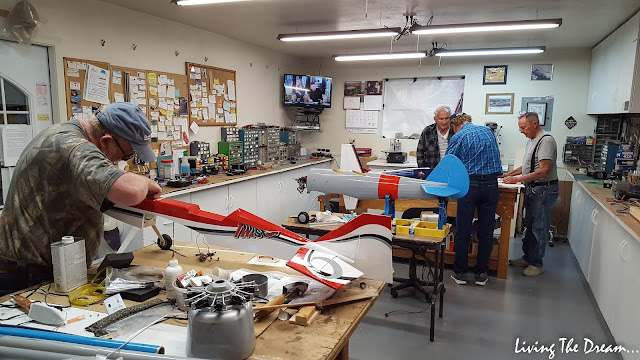 I made the sauce for lasagne so that all I have to do tomorrow when Laura and John get here is put it together. We met Laura and John last summer while in Quebec...they are from Iowa and travel full time in there Roadrunner...a camper van! They are stopping by for a few days to experience the Quartzsite desert...although a little late for the true experience as most of the vendors are gone and some other business's are now closed.

Other than that, I didn't do much other than sit in my chair reading a book. When Steve got home, we tried to sit outside but although the rain had stopped, the wind had come up and it really wasn't that pleasant...so that was short-lived.

We opened the blinds Wednesday (Mar. 13) morning to find blue sky with just a few clouds...it had been a windy night and it is forecast to be breezy all day today too.

At 8:30 Steve headed off to the last meeting for this season at the RC hanger and then to run a few errands. While he was gone, I wrote a blog...so it was ready for pictures. When Steve got home, he worked on some pictures and I managed to get a blog update posted.

Just after 3:00, we received a phone call from John and Laura...they are here! So Steve jumped on his quad to go meet and guide them in. Steve led them to the spot beside us where Earl and Allison had been.

They came over and we tried sitting outside using the truck as a wind break but it wasn't very pleasant, so we ended up going inside. We had lasagne and Caesar salad for dinner, along with some delicious bread sticks that Laura brought. We had a nice evening catching up...so good to see you again! 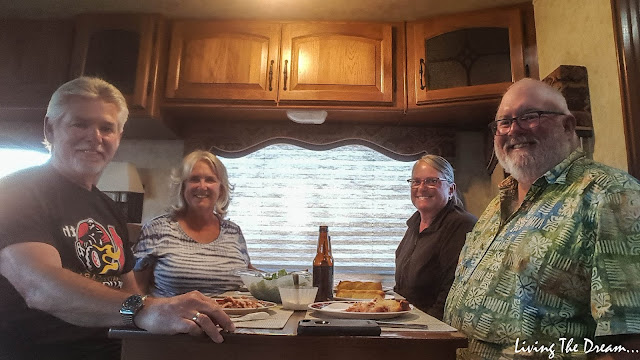 Thursday (Mar. 14) was another sunny day with calm winds to start. I got out for a walk...very slow going and painful, so I only did about 1.75 miles. By the time I got home, the wind had come up again. At least it is now coming from the west/northwest.

Steve went out to tackle another chore on his list...clean up the putty tape sealant on a slide room window and our door window. Over time with heat it has softened and squeezed out from the window frames. He applied Proflex sealant around the slide room window for a little extra insurance.  It was very blustery while he was out there.

I sat inside at the dining table working on a blog. When Steve came in, he did his read/edit of it and I published it....we're slowly getting there but we now realize that we will not have it totally up-to-date before we leave here. However, Steve continues to edit pictures.

I read my book and then at about 3:00, the wind subsided a bit so I decided to go sit outside...at least what wind there was, was blocked by the trailer so I was fairly sheltered.

Just before 4:00 we put the awning out and the sunscreen up....in time for happy hour. John, Laura, Red and Pam joined us. So nice to sit outside in the sunshine without being blown away... 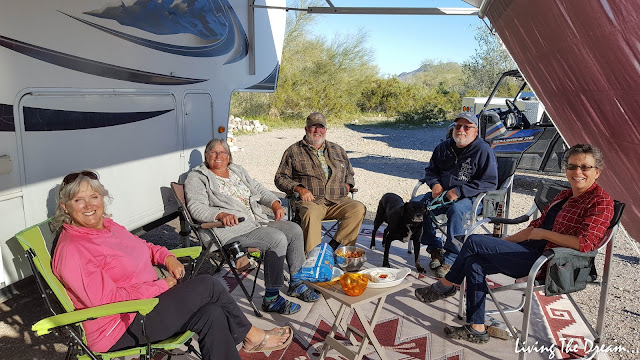 Shortly after 5:30, happy hour ended and everyone went home for their dinner. Steve and I took down the sunscreen and awning...just don't trust that wind!

Posted by Dianne and Steve at 8:53 AM