We spent most of Monday waiting to hear from Jim at Happy Hals Mobile RV Repair. To start with, when he was here late Friday and removed the shower tap assembly, he left with the screws. We can't put them back on without those screws if Steve has to a temporary fix. Steve called first thing only to have his call go to voicemail; he also sent a text which their message said was quicker . Happy Hals have good reviews but our biggest frustration with them is their lack of communication with their customers.

It was mid morning when he finally received a phone call from Emily...she must work in the office? She didn't seem to know much about our situation...she would have Jim call us. Around noon Jim called...he said he was on his way over. Not sure "from where" because it was a good hour before he showed up. He took some more measurements and pictures (why wasn't this done last Friday) and said he was waiting to hear back from a local RV dealer as to whether a new shower pan could be sourced quickly. He then left saying he'd call us as soon as he heard back.

While we were doing all of this "waiting", I worked on another blog post while Steve worked in the shower stall trying to remove and clean up all of the silicone from the tap assembly in preparation for putting it back on.

A couple of days ago, we had noticed a lot of "water" in the bottom of our fridge. We have had this happen before when the water in the drip tray freezes causing additional water to over flow. Or the tube going outside gets plugged. Well, I have taken the fridge apart a couple of times to check the drip tray and clean up the "water". There never seemed to be an issue with the tray...so with the luck we've been having lately, we figured that we were now having issues with the fridge (like...great, what next?!) We just couldn't figure out where the "water" was coming from...there was always very little water and no ice in the drip tray. Well today when I pulled out the vegetable tray, it was full of "water"...huh? That's when I finally discovered that it wasn't "water" after all...it was white wine! The new box of wine I keep on the shelf right above the veg tray obviously had a very slow leak in it and had been leaking wine since I opened it last Thursday. Now, I must admit, I think I may be guilty of the leak...I had a hard time with the perforations when opening the box so I took a sharp paring knife to help. I must have punctured the bag...oops! Although such a waste of wine, we're glad that's all it was! The funny thing is, I always thought the "water" had a bit of a "beer" smell to it...never crossed my mind that it could be wine!

At 3:30, Steve still hadn't heard back from Jim, so he called him. He was still waiting to hear from the RV dealer...he'd call us back in an hour.

Just before 4:00 we decided to walk over to Ram's Head Bar and partake in their drink special for RVers. Why wait here for a phone call...we can take it while at the bar. We are scheduled to leave here on Wednesday and had let them know at the office Saturday that we may have to extend our stay pending maintenance issues we are having. We had told them that we would know today if we needed to stay. So on our way over to the casino, we stopped at the office to let them know that we still didn't know anything further. It didn't seem to be an issue.

We arrived at the Ram's Head Bar to find it not open...huh? A few minutes later, a bartender arrived and started setting up....running a little late today, I guess! While we waited for him to open, we watched another water show....very impressive.
The bartender that opened up the bar left and a new one took over. When Steve went up to order another round he was told "you're only allowed one 2 for 1 each". What? The other two bartenders didn't operate that way. "Well I got the memo and the others don't know what they're doing". Whatever! Our new friend Jim from South Carolina warned us about this the other day. 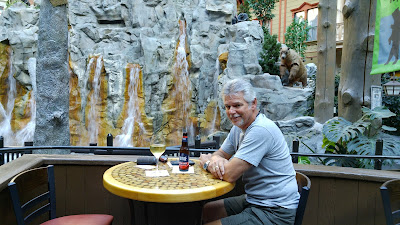 Well, 4:30 came and went....and so did 5:00...with no phone call from Jim. I understand that he probably hasn't heard anything from the RV dealer so has nothing to tell us...but gee, why not call to let us know. After all, if you say you're going to call us in an hour...then call us in an hour!

We finished our drinks just before 5:30...and started home, stopping at a few slots on our way out of the casino. No winning today!

Tuesday morning just before 8:30 Steve received a phone call from Jim saying that the shower pan replacement would take a week to get here. That's just too long for us to hang around here and that's if everything goes right, so Steve is going to patch the cracks himself and we'll look at getting it replaced somewhere in southern Arizona. This wasn't a surprise to Jim because we had told him if a replacement could be here in a couple of days, we would wait, otherwise we'd have to take temporary measures. Bonus part...Jim is not going to charge us for the time he spent working on this for us! Nice! Thank you Happy Hals RV Repair.

It is nice that this is finally settled one way or the other...now we can get on with it! So shortly after 9:00, we were on our way to Home Depot to pick up supplies needed for the repair. 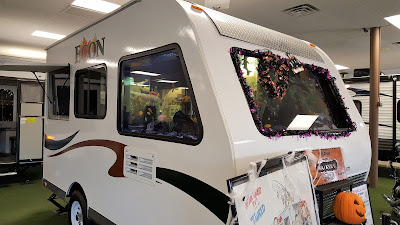 Johnnie Walker RV Center happened to be on our route, so we made a stop there to pick up a new plug orifice for the fridge drain hose.
This was the most unusual and expensive aquarium we've ever seen...very cool! 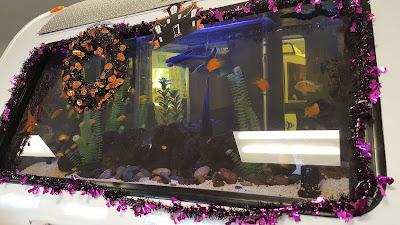 After a stop to top up the truck with diesel ($2.79/gal), we were home and Steve got ready to tackle the patch job.
First, he cleaned the area with mineral spirits... 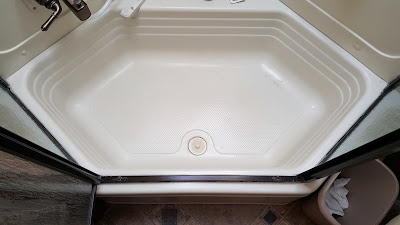 Then drilled small holes at the end of each crack to stop them from expanding any further... 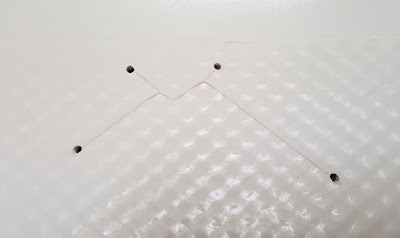 Taped off the area to make it look a little neater... 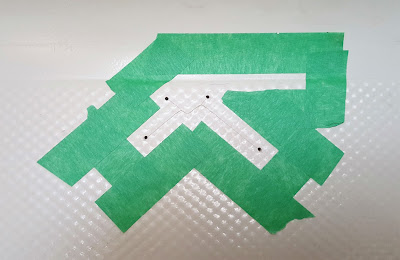 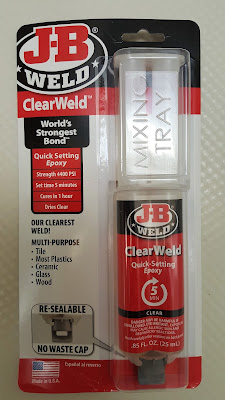 The JB Weld has a double syringe that requires you to mix the epoxy with the hardening agent. It sets in 5 minutes and cures in 1 hour with a strength of 4400 PSI. Hopefully neither one of us exerts that kind of pressure! LOL! It ain't purdy but hopefully it works until we get the pan replaced. 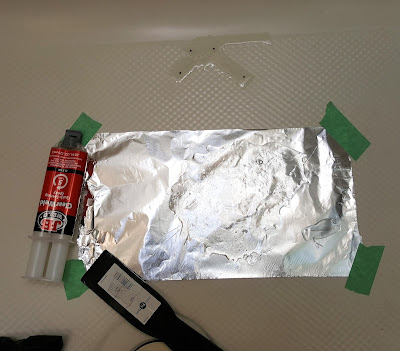 While he was working on that, I decided to tackle a chore...recording our budget expenses. But that couldn't go smoothly...I couldn't open up my Excel spreadsheet! What?! I kept getting an error message. There was a Windows Update that I hadn't downloaded and installed yet, so I decided to give that a try and hope that it would resolved the problem. Turns out it was a significant update which took "forever" to download and install...but it did the trick! Thank goodness! However, it took most of the afternoon.

Last Thursday we opened a Verizon account and activated our MiFi. We decided on the 8 GB monthly plan, thinking that would be plenty. Well, I guess between that big Windows update and Steve watching a couple of Youtube videos about using the J-B Weld, next thing we knew we were over the limit. But we were just over 4 GB this morning from those blog posts that had tons of pictures! We still think there's something odd there...but I immediately updated our plan to Unlimited. Makes sense for another 10 bucks or so.

Steve's patch job went smoothly and he finished off his afternoon by watching one of his shows...it was a pretty hot day out, 85F/29C so we were basically hunkered down inside with the AC running (yay for full hookups!)

We also made the decision this morning to stay one more night...amazing that one week will be up tomorrow! After being in limbo for a few days about our shower pan replacement/repair, we figured we needed one more day to get things done before we head out.

So Wednesday was a work day. We decided to leave the shower "curing" for one more day and both used the parks shower facilities this morning. Not a problem because they are quite nice.

Then it was time to get a couple of loads of laundry done. Steve dumped the tanks and flushed the fresh water tank and our spare water containers in preparation for some boondocking at Lone Rock. Once we were all done Steve dropped me off at Albertson's, about a mile down the road. I did one last stocking up. While I was busy shopping, Steve chilled back at the rig waiting for my call to be picked up.

By the time I got everything put away, it was time to sit outside with a cocktail and relax. We're looking forward to hitting the road again tomorrow!