It was an absolutely gorgeous morning as we pulled out of Teslin Lake campground and continued north towards Whitehorse...just 161.5 kms/100 miles, so a short drive day today.  Teslin Lake is a big lake! 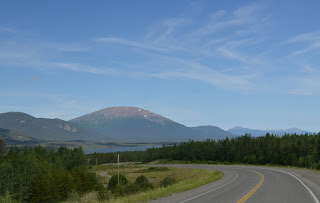 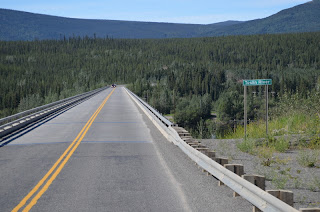 We drove across the Teslin River Bridge, the third longest water span on the highway.  It was constructed with a very high clearance above the river to permit steamers of the British Yukon Navigation Co. to pass under it en route from Whitehorse to Teslin.  River steamers ceased operation on the Teslin river in 1942.  Before the construction of the Alaska Highway, all freight and supplies for Teslin traveled the water route from Whitehorse. 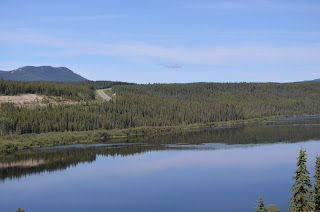 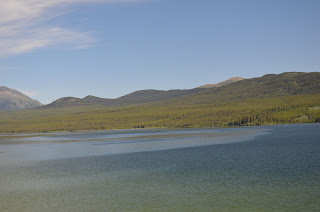 This is Squanga Lake...The Tagish (the area's First Nations) name for Squanga Lake is Desgwaage Mene, "whitefish lake", referring to the rare Squanga Pygmy whitefish found in these waters. 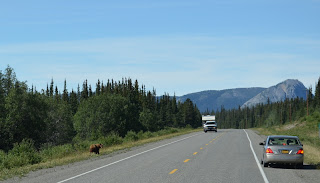 About 40 minutes into our drive, we came across vehicles pulled over...a young grizzly bear was on the side of the road! 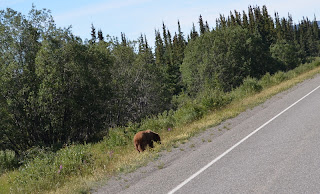 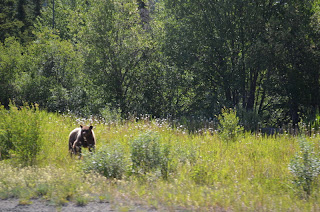 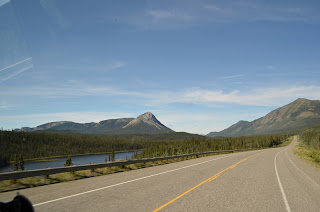 Marsh Lake, part of the Yukon River system, is approximately 32 kms/20 miles long and was named in 1883 by Lt. Frederick Schwatka, U.S. Army, for Yale professor Othniel Charles Marsh.  Marsh Lake and, in particular the sandy Army Beach, is a popular recreation area for Whitehorse residents. 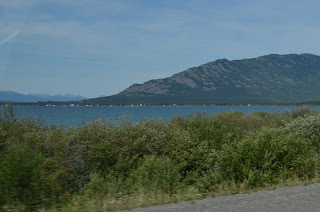 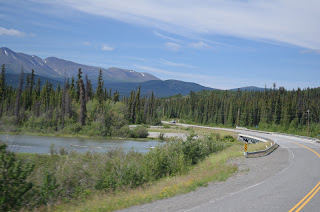 Yukon River bridge...the Yukon River flows northwest from its headwaters near the Yukon Territory-British Columbia border to Fort Yukon in Alaska. From there it turns sharply southwest across Alaska to empty into the Bering Sea at Norton Sound. 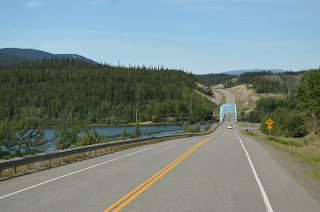 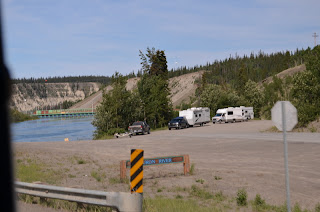 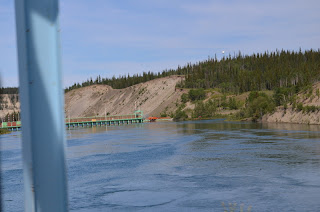 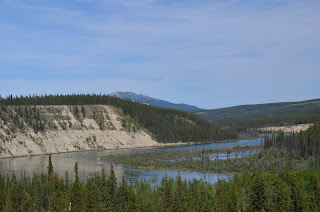 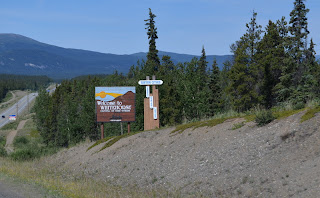 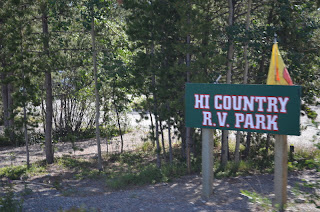 We arrived at Hi Country RV Park at about noon.  We chose this full service facility RV park for a number of reasons...it is close to town (just 5 minutes from downtown), we desperately needed laundry facilities...and it was recommended to us by a number of people we had met.  Although a little costly (but not by "northern standards") at the Good Sam rate of $36/night plus tax..

We have an end site that is semi private as long as there in no traffic...unfortunately many of the sites are designed so that your door faces your neighbours... 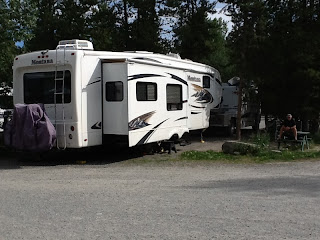 Steve here for the road report from Dawson Creek to Whitehorse: Considering that our truck rides like a buckboard...better than I expected...we have been on worse spots on the I-5 south of Seattle. (I am not kidding!)

The first part north of Dawson Creek has so many gravel roads leading from oil and gas fields that the highway gets very dirty, so if it's dry out it will be dusty in spots and if it's raining like when we went through you will get very dirty.

There was one small bridge that had a bad transition that snuck up on me so that was probably the worst part of the trip so far. Unfortunately I can't remember exactly which bridge as we have been so far behind in the blog but it was within the first couple of days of our drive.

The 16 kms of dirt road under construction was smoother than the highway...just very dusty and we did get sprayed with gravel by an inconsiderate semi driver. Next time I will flash my lights and lean on my air horn just so I can vent! This should be repaved by the end of the season. I won't be able to tell if I have any rock chip damage until I wash the truck and trailer.

There are many sections that have been re-topped, not repaved, or patched sections and of course pot holes.  I will drive around many of the patched sections depending on traffic and potholes have been easy to avoid so far...you just have to be on the ball if there is oncoming traffic.
Stay tuned!

Posted by Dianne and Steve at 1:06 PM