Before we head south we had some things to do in Castlegar...but the weather just sucked Tuesday...major rain!  So we decided to just hunker down inside for most of the day...finally heading out to sit by a campfire (and under the tarp) mid afternoon.  As you can see, we stayed out enjoying the fire for awhile... 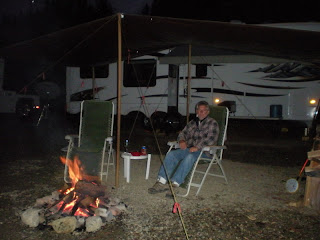 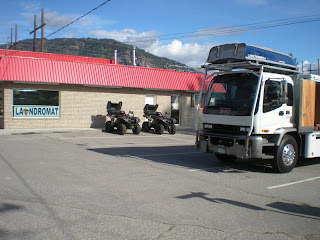 Wednesday`s weather was much better so we headed into Castlegar just after 9:00 a.m.  There is a laundry and car wash facility which worked out perfect...I did laundry while Steve offloaded the quads and washed them.  While doing laundry, I tried booking flights from Phoenix to Victoria (for Christmas) on the laptop but the website was having technical difficulties so I ended up doing it on the cell.  But I finally managed to get them booked...Westjet flies direct between Phoenix and Victoria...bonus!  Only on Fridays though, so we fly home on December 16th and return to Phoenix December 30th.
By the time I got that done, Steve was finished washing the quads and the laundry was almost done.  It was noon and Steve wanted to go to Kal Tire and get a leaky tire on his quad checked...and we knew (from our visit last June) that there was a pub next door...we`ll go there for lunch.  So I sat in a corner of the pub where I could plug my laptop in and "took care of business"...over a beer while I waited for Steve.  I had just finished purchasing our travel insurance when Steve came in. The service tech said Steve`s tire seems to have a manufacturers defect in several spots so he put a tube in it. He will have to try and get a warranty replacement somewhere. We had lunch...by the time we finished it was well after 2pm and we still had a couple of more things to do before we headed back to camp.


It was close to 4pm by the time we got back to camp.  We are leaving tomorrow so it was time to start getting things packed up.  Under the threat of a big black cloud, we managed to get the tarp put away before it started to rain.  The rain ended up just being a bit of a sprinkle so Steve continued outside getting things put away...it had been almost 3 weeks since arriving so there was lots to do.
We enjoyed our last campfire and just as we were going to head inside, it started to rain...good timing!  We are both really looking forward to hitting the road again tomorrow...our travels continue!
Posted by Dianne and Steve at 9:28 PM