Friday morning we headed off with Earl and Allison to Yuma. They were good enough to wait while Steve and I went into a Verizon store (originally we thought there was a Michael's the same complex so it would have been perfect...Allison could do her shopping while we were in Verizon. Unfortunately, that wasn't the case so they waited patiently). Our purpose for stopping at Verizon was to cancel our postpaid account and open a prepaid account...it's basically the same cost but with the prepaid, the data is not throttled back at 15 GB. As usual it seemed I knew more about the plan than the reps in the store...thus it took longer than it really should have. Glad I did my research before we went! 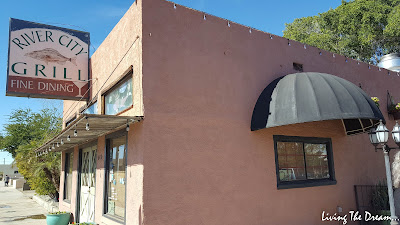 Once finished there, we were off to lunch in Old Yuma at River City Grill...excellent meals! 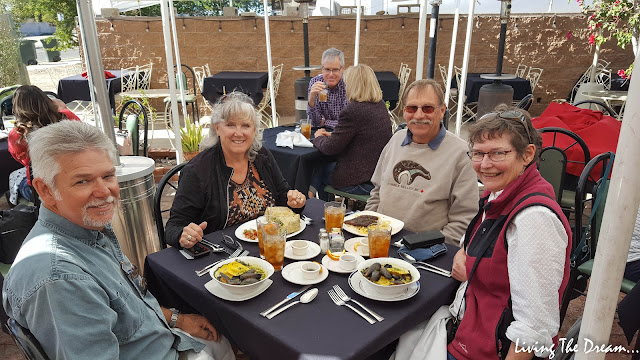 We found the Michael's store and after a little shopping there, we were off to stock up with groceries at Fry's.

It was going on 5:30 by the time we got home. Thanks for letting us tag along Earl and Allison, it was a great day!

After putting the groceries away, we went over to Steve and Debbie's to join the gang around the campfire. Left to right, around the fire...Harry, Glenda, Curt, Sue, Guy, Steve Mc, Debbie, Red, Steve W, Diane, Vicki and me... 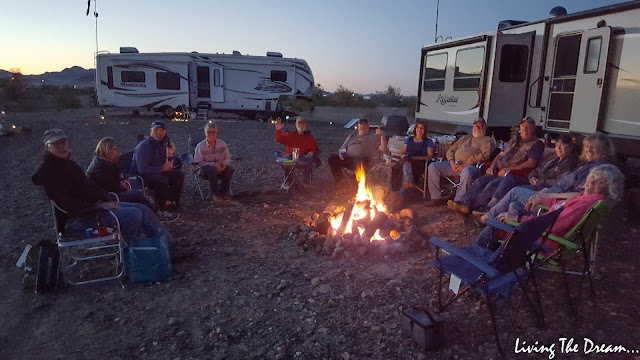 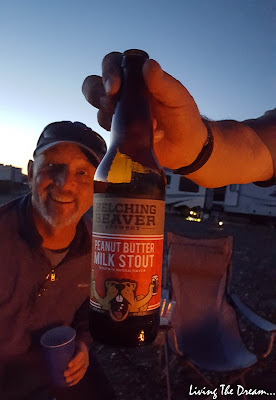 A bottle of a very tasty beer that Curt was holding up in the previous picture. Steve Mc is holding the bottle of Peanut Butter Milk Stout here and even gave me a taste...yum! (but pretty heavy...couldn't handle a lot of it!)

Saturday (Jan 26) is the Canadian Potluck luncheon at the QIA (Quartzsite Improvement Association)...so I prepared the salad I was taking and got plates and cutlery packed and ready to go. We were catching a ride with Earl and Allison, so were over at their place by 10:35.

After signing in, paying our $3 each and buying 50/50 tickets, we picked a table to sit at...Jim, Cec(on the left beside me, Jack and Kathy on the right beside Allison and Earl 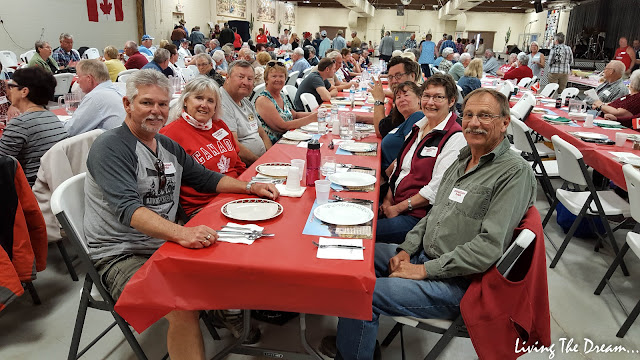 As usual, there was a huge spread of food...roast beef, potatoes and gravy provided while everyone else brings their favourite side dishes and desserts. Lots and lots of food! 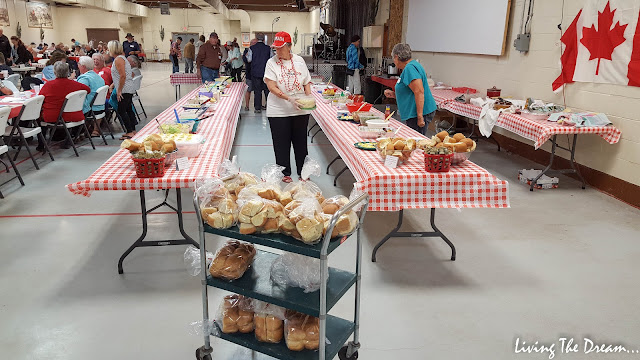 The dessert table and guard... 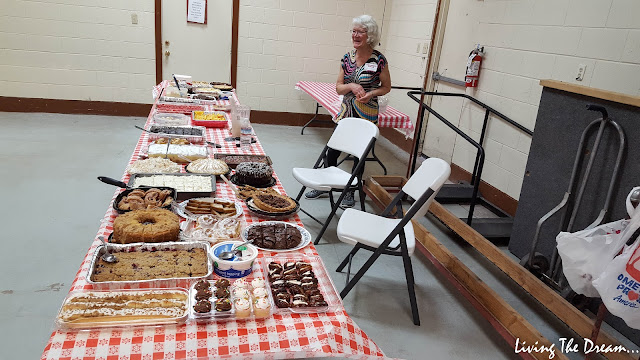 There was a good turnout this year...193, however, we have attended in previous years and there have been over 200. Cec was the only one from our group to win a door prize and the 50/50 collected $600, splitting the give-away part into 2-$150 prizes...no one at our table had their numbers picked for that. That was another great potluck!

It was just after 2:00 when we got home. Steve relaxed in his chair and started editing pictures while I sat outside knitting.

Steve and I were both sitting outside enjoying a bevie when Debbie and Diane stopped by with Hurley and Ruger on their way home from a walk. They sat and visited for a bit before continuing on their way.

Dinner tonight was just a salad after that big lunch...and afterwards Earl and Allison came over and we played Rummikub again. The expert game players won most of the games but Steve did win one...me, zip.

Sunday (Jan 27) was a mainly a chore day...Steve went with Red and Harry to get propane. Once back, he "pumped and dumped".

I managed to get some work done on the laptop...finished a blog update and did some banking. Thankfully the internet was pretty good...all the folks must be at the show! When it slowed down, I did some house cleaning.

After dinner, we joined everyone around the campfire over at Steve and Debbie's one last time...they are leaving in the morning. As usual, it was wonderful seeing them again this year...but next year we hope there is a spot closer, affording us more time with them. It was also great seeing Steve and Diane again and meeting new friends, Curt and Glenda!

Monday (Jan 28) was ride day again! A couple of folks on the ride had not been on the "Diablo Pass" ride so we're doing that ride again...no problem with me, it's a favourite! We started off from Earl's at 9:30...Earl leading, followed by me, Red with Harry as a passenger, Jim/Cec and Steve. We "picked up" Randy in the wash along the way.

Only a few pictures this time as we've posted many in previous blogs. A panorama shot as we stop for a break at Diablo Pass... 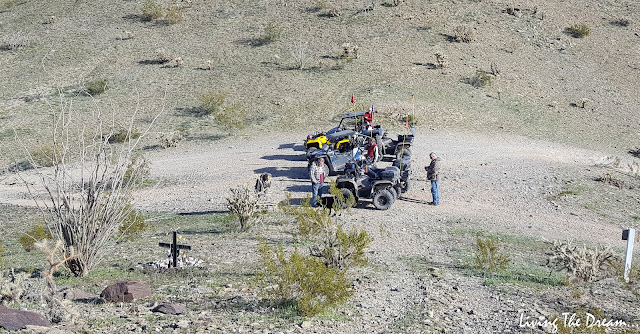 We stopped for lunch at Dome Basin Mine...Harry and Red as we're about to head off... 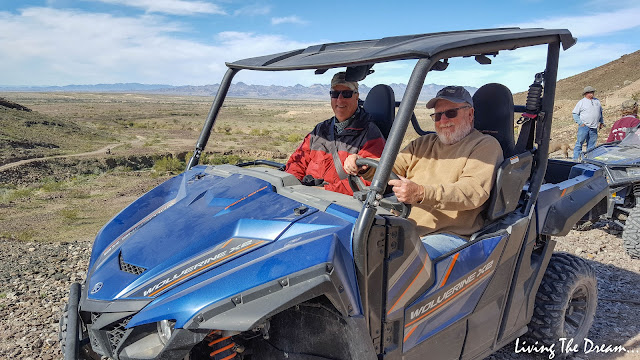 We stopped on our way home to grab a geocache close by at what appeared to be an old cattle corral. Amazing how green this spot is! 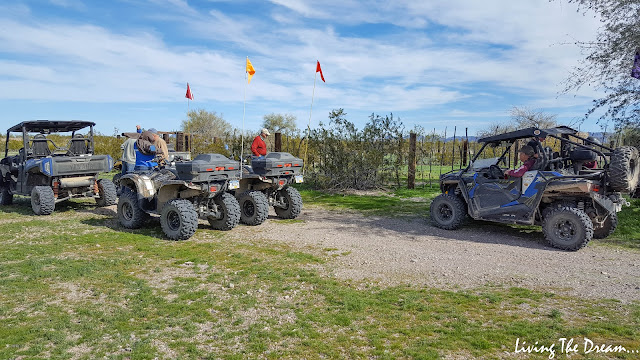 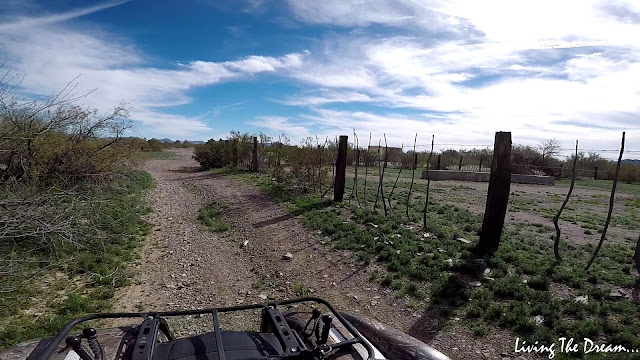 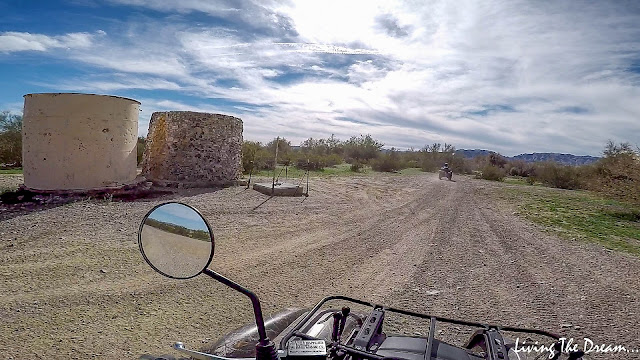 After another fabulous ride, we arrived home around 2:00...perfect! It gave us time to clean up and relax a bit before heading out to Les and Sue's place.

As usual Sue had outdone herself preparing tons of food for us all! Red, me, Vicki, Harry, Sue, Donna, Allan...and a friend of Les and Sue's, unfortunately I cannot remember his name... 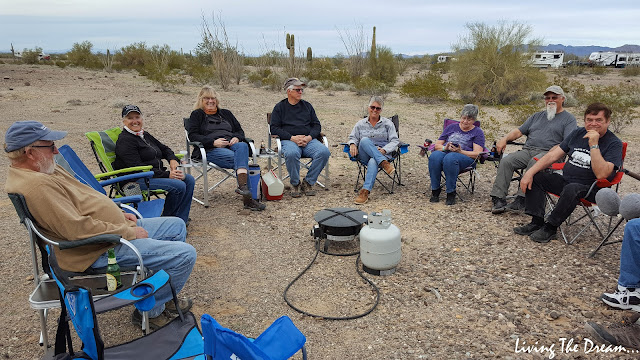 Sue revealing all of the tasty dishes that she has just put out on the table behind her... 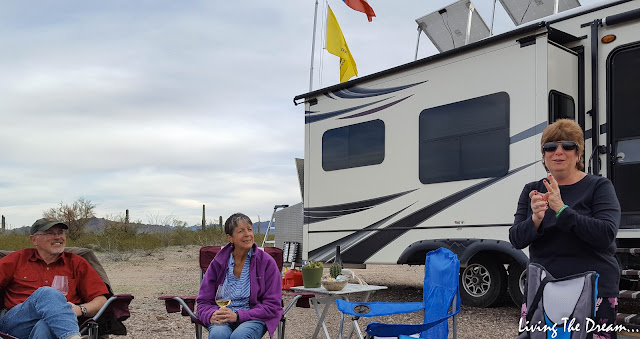 Unfortunately our other host,  Les managed to dodge the photographer... 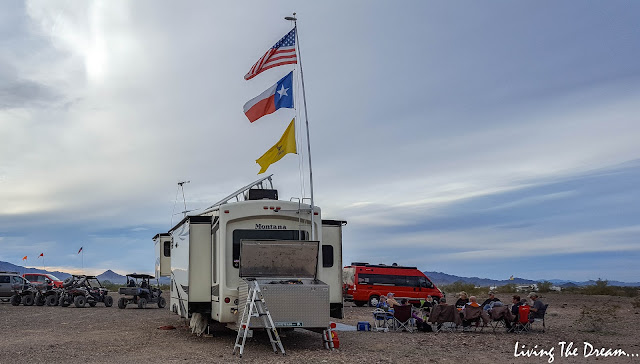 Good food, good conversation...a great evening! Thanks so much Sue and Les!

Tuesday (Jan 29) we were up shortly after 5:00...sheesh! We're not sleeping well for some unknown reason! We decided to get our morning exercise by walking down to the gatehouse to purchase our permit since the government shutdown is now over. Unfortunately, we were a little early for it to be open, so we figured by the time we walked back home and got our quads they'd be open and they were..

After lunch we decided to ride the quads into town and check out the vendors on the north side of Kuehn Road. We usually do this before the Show but hadn't found time yet. We found that a lot of the vendors had already packed up and left...which surprised us because the Show had just ended Sunday. 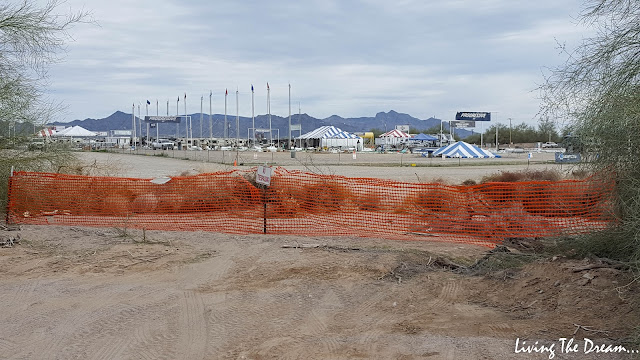 We walked around checking out what was still open but I found my knees giving me a lot of pain...especially my left one. So much for the injections I had...they lasted barely a month! So we stopped at Beer Belly's for a beer...ahhh...it felt good to sit down! Good excuse to stop for a beer, don't you think?! LOL

Back home, we sat outside and Pam joined us for a glass of wine...Red is starting to not feel well. Pam has had a bad cold and was out of commission for a number of days and is just starting to feel better. Now she's hoping Red isn't getting it!

Harry and Vicki also came over...and Fred and Terri also stopped by for a visit. Seems everyone always knows there is a happy hour over at our place at 4! 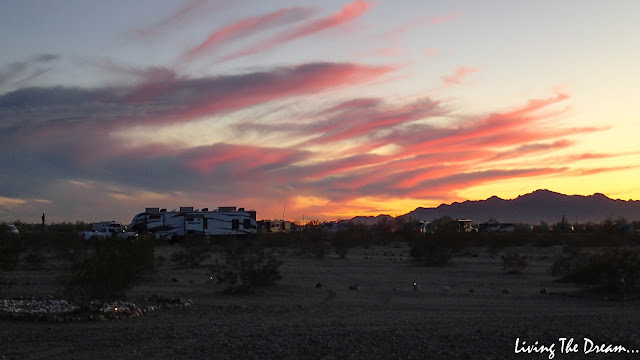 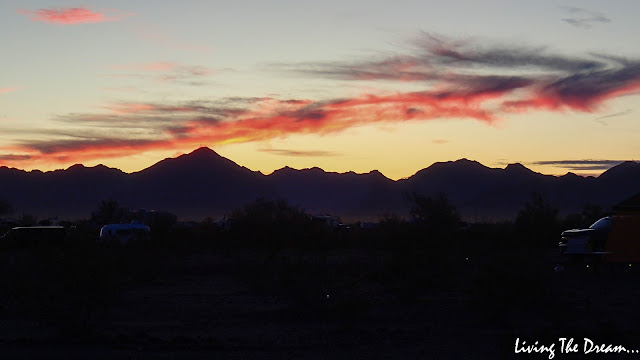 Wednesday (Jan 30) morning we were up early again! After a short walk, Steve decided to get out to fly his glider. Unfortunately he had some problems with it, so decided to try his big plane...and found it wasn't working  properly either. He found out later that he just hadn't tested a setting on it before flying...it was fine, whew! It's been awhile since he has flown it!

I worked on a blog update...the internet has improved since the show is over and people have cleared out...thank goodness! While I was doing that, Steve took on a couple of maintenance projecst...the leaky kitchen facet and the toilet seal. Dometic actually sent us a new seal under warranty...and that did the trick!

We had a rather spectacular sunset tonight... 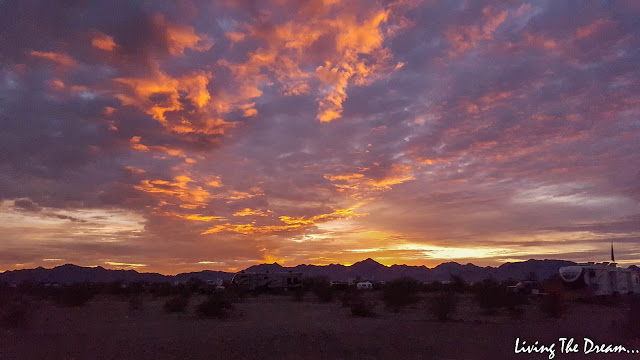 Thursday (Jan 31) morning after exercises, I decided to see how my knees do on a walk. I managed 2 miles..."use them or loose them" I say!

We had a couple of errands to run in town, so headed off after lunch. On the way we stopped at Guy and Sue's and got a tour of their new Luxe Toy Hauler fifth-wheel...beautiful! They leave tomorrow, so later on we had a last happy hour with them over at our place. Earl, me, Vicki, Harry, Pam, Red, Guy and Sue... 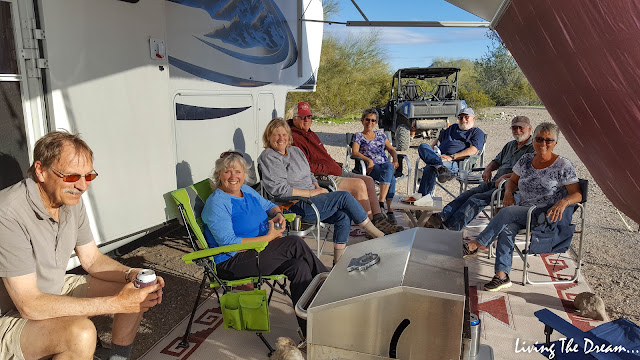 Great seeing you again this year, Guy and Sue...and twice (Elkhart and here) to boot! Safe travels...and look forward to seeing you both next year!