We woke to cloudy skies this morning...the temps are still forecast to go into the low 80's, but the blue sky and sunshine is missing!

After our usual start to the day, Steve hopped on his quad and rode down to the LTVA entrance to meet the tech that was coming out to fix our hot water tank. He was scheduled to be here at 9:30. Just before 10:00, Steve returned...with no service tech! After waiting and waiting, Steve called the company to find out that they had forgotten about our appointment! Can you believe it?...they forgot! After apologizing profusely, they said they could have someone out tomorrow morning. Not very happy, Steve told them he'd keep that appointment but in the meantime he was going to try to get someone else out today.

There are not a lot of choices in the area but after checking the business directory booklet for Quartzsite, Steve called another company and after chatting with the fellow, he said that he was in Salome (about 40 minutes east of here) but would call between 2:00 and 3:00 and be out later this afternoon.

Well, time to carry on with the day...so Steve drove into Q to pick up 2 parcels that had arrived at Quiet Times. Our new Strongback chairs had arrived from LL Bean. While he was gone, I decided I might as well heat water on the stove to do the dishes and get the kitchen cleaned up. 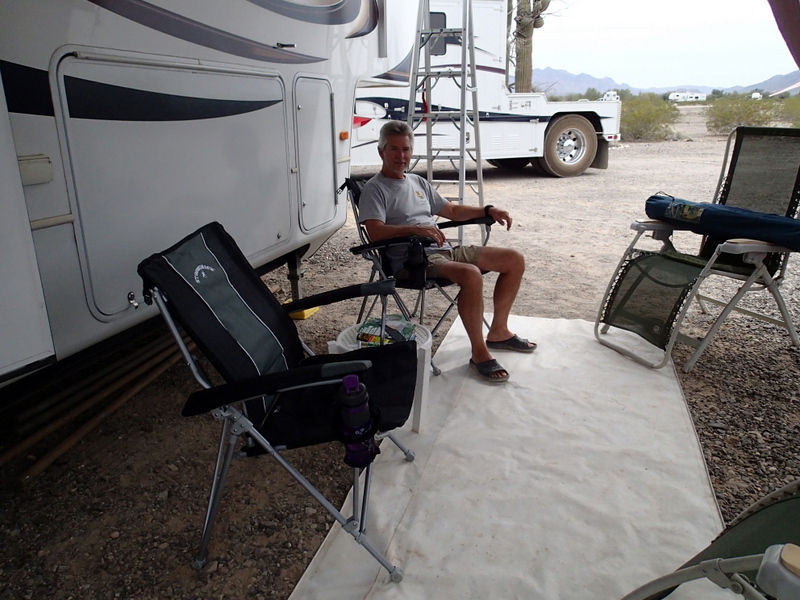 Once Steve got back, we tested out our new chairs. They have lots of support and are very comfy.


Then Steve decided to get to work on resealing the back window. We plan on having the truck and trailer detailed when we are at Indio so he wants to get any necessary resealing done before then. 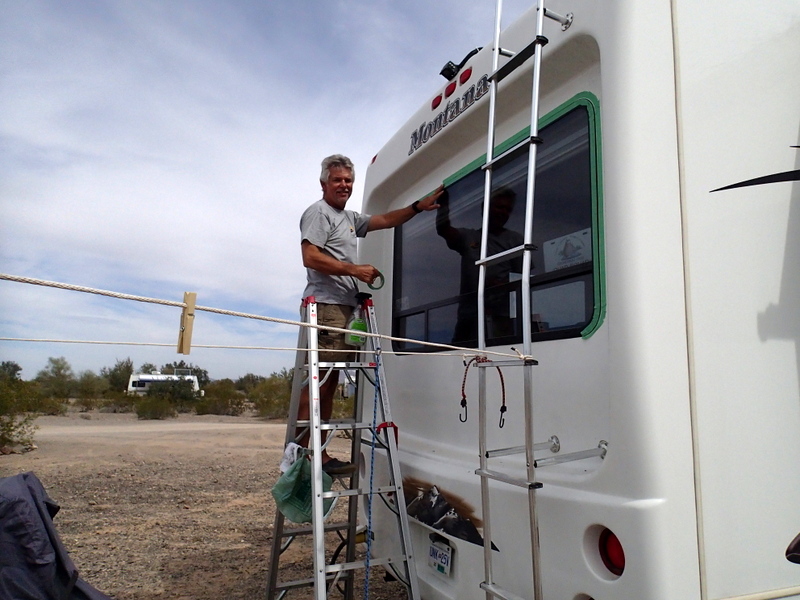 I grabbed my kindle and settled outside reading. With the resealing done, Steve joined me relaxing in the afternoon sunshine (yes, the sun had finally come out!). We were getting rather anxious when 3:00 passed and we hadn't heard back from the fellow who was supposed to come out to fix our hot water tank. Thankfully, he called at 3:30...he'll be here in about an hour. Well...an hour came and went and still no tech and no phone call. He called just before 5:00, apologizing...there had been a fire in the the RV park that he was at. It was close to 5:30 by the time he actually got here.

After checking the hot water tank, he determined that the gas valve needed to be replaced...and you got it...he didn't have the right one with him. He'll be back out tomorrow morning to finish the work.

Posted by Dianne and Steve at 7:05 AM