Saturday morning, Steve was out just before 7:00 to pump and dump...a couple of hours later, the tanks were empty and the fresh water tank was full.

Dave and Leslie's rig with the early morning sun on the mountains... 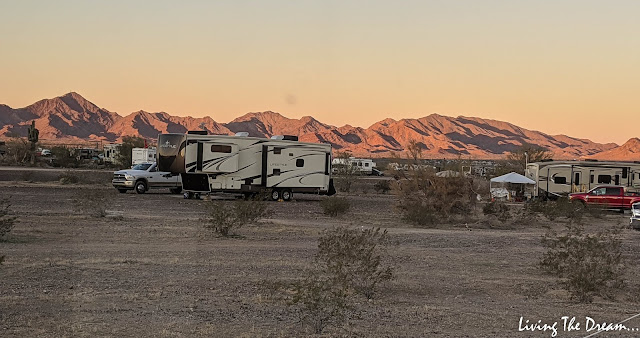 I cleaned up the dishes from last night. When Steve was done, we had a late breakfast and then I made a big pot of chili for our beer tasting get together tonight. With that done, I did the dishes again...ugh!

Steve went into town with Dave and Leslie to fill our gas containers and pick up some ice for the cooler...to keep the selection of beer cold.

While they were gone, I decided to put on my walking shoes, grab my walking poles and try a fairly short walk. The best walk so far...good pace and no pain! YAY

The rest of the afternoon was spent relaxing until it was time to get ready for the beer tasting. This is an event that was started by Jim, Barb and ourselves 4 years ago and has turned into an annual event. Thanks for the beer samples you left behind Jim and Barb...you were in our thoughts! Steve moved the truck over to act as a wind barrier and Dino also brought over their portable wind screen...a great purchase from the RV show.

Dave  R. going around the circle passing tasters of a beer he brought starting with Cec... 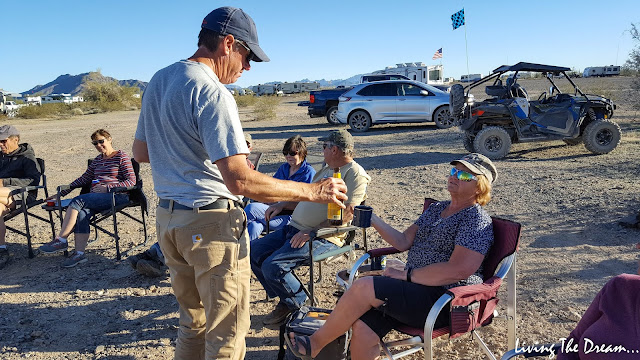 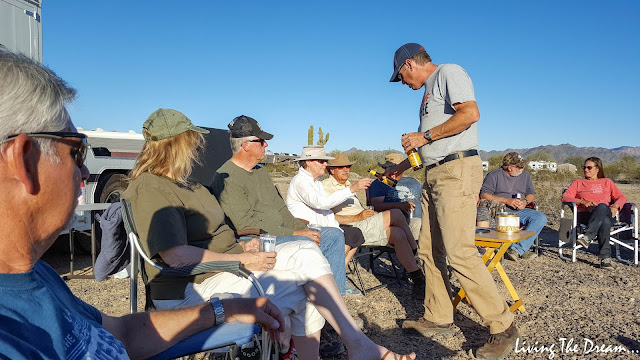 We also included a little wine tasting to those who are not fussy about beer. Here I am following Lisa around with plastic cups as she offers wine... 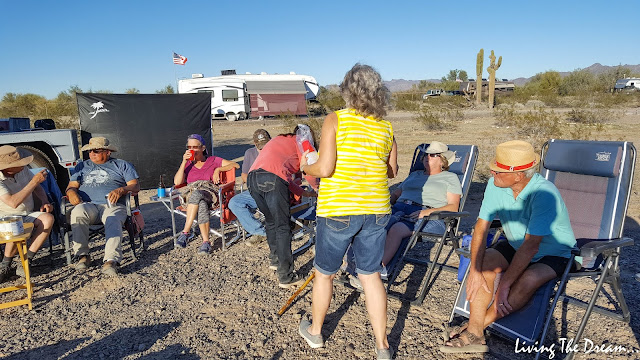 We brought down a variety of specialty beer from Victoria...this ones a Bourbon Black Lager from Phillips Brewery. Dave, Earl and Len brought some Canadian brews as well... 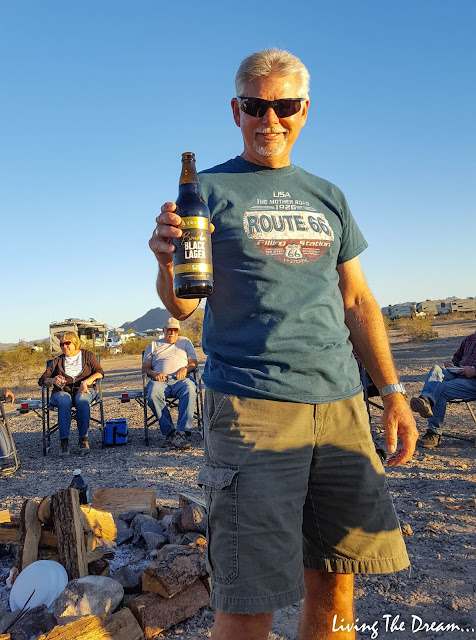 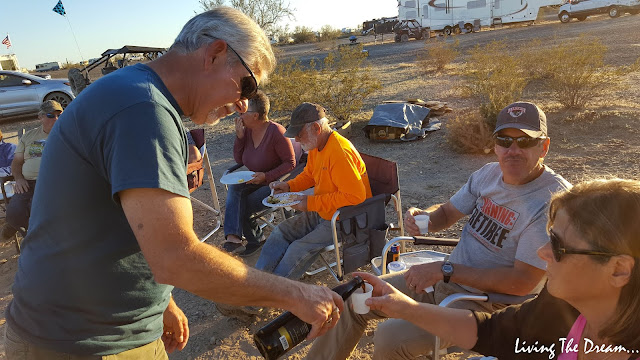 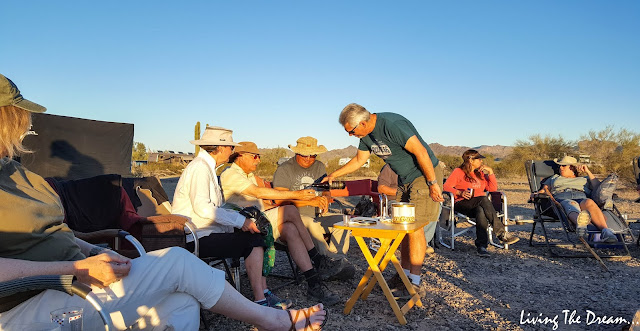 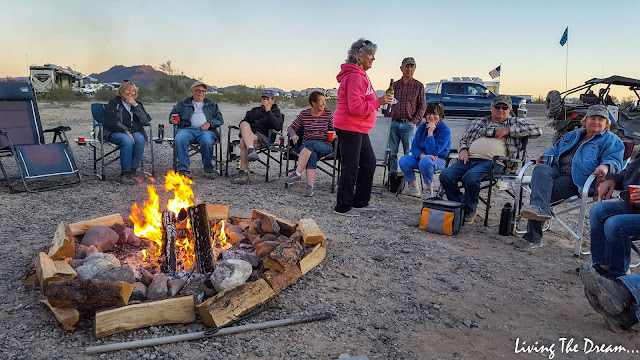 Basically everyone took turns going around the circle giving out samples. Lots of beer...and even a few bottles of wine! This lineup was still early in the evening...should have gotten the morning after picture...

More chatting around the campfire...and more beer and wine! 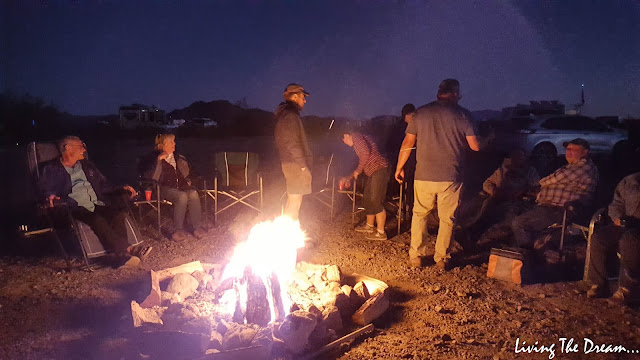 A great evening...interesting that we didn't get a picture of the table that had a great array of food on it! LOL!

Sunday (Feb. 2) morning, we went into town with Dave and Leslie. We checked out some various RV's at a couple of places before they all clear out. It's amazing the number of RV's the companies bring in for the RV show!

Then it was time for lunch...at Silly Al's Pizza! After last nights event it was water and ice tea to start:) 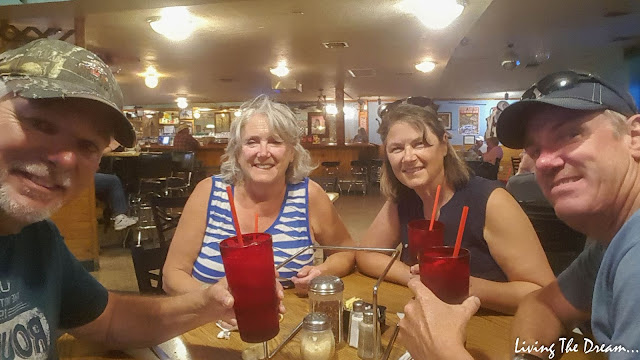 Super Bowl Sunday...non game watchers came over to our place and we had our own party! LOL
Harry Vicki, Roger and Cindi....Colan and Marilyn joined us later. Steve had parked the truck in front of our sunshade to block some of the wind but it was still whipping around a bit. 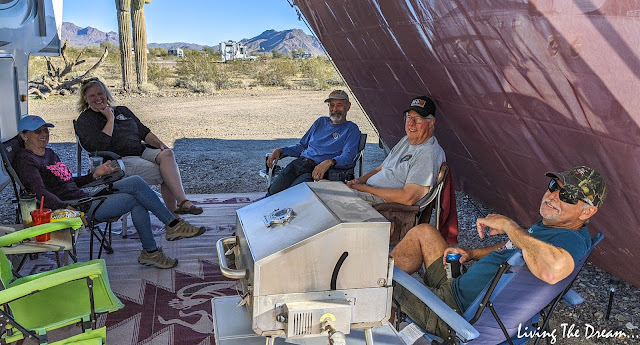 Once everyone left we took the sunshade and flag down, then put the awning up.

Monday (Feb. 3) we had a big change in the weather...although we have had some windy days lately, today there was a big drop in the temperature. It was cold and blustery, and of course, very dusty! Yesterday we finally reached 26C/79F at our rig...warmest day in a long time. Today we only reached a high of 13C/55F at our rig and tonights low is 3C/38F!
The dust just before sunrise... 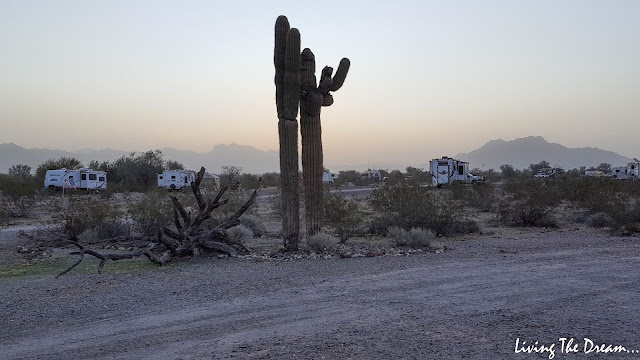 The mountains behind Dave and Leslie's rig are barely visible...

The sunrise is trying to make an appearance through the dust on the mountains...

Harry hiding from the wind and dust in front of his rig...did Vicki kick him out?...LOL! (Steve:) 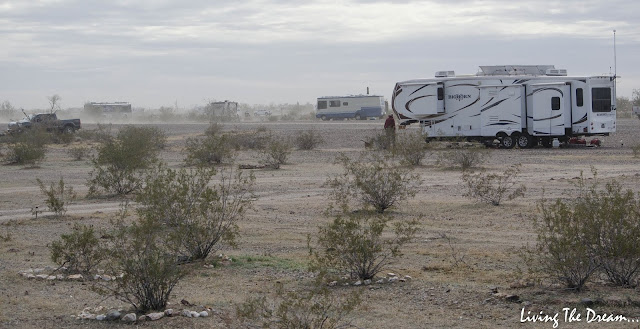 Needless to say, we spent the day inside! 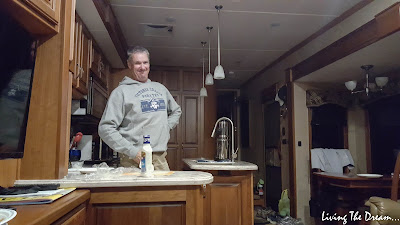 Just after 4:00 we battled the wind, walking over to Dave and Leslie's, joining them for a drink. It turned out to be a long happy hour! It was after 9:00 by the time we got home! Good thing Leslie fed us some hearty snacks!

Tuesday (Feb. 4) Deb picked me up at 9:00 a.m. and we were off to Parker...it's our girl's "beauty day" LOL! We started off by both getting a hair cut...a little shorter than I had planned but she did a good job. Next was shopping at Walmart, before out noon pedicure appointment. A little more shopping after that, lunch...and then we were finally on our way home. Thanks for a great day, Deb.

While I was gone, Steve enjoyed his day inside...it was another windy day! 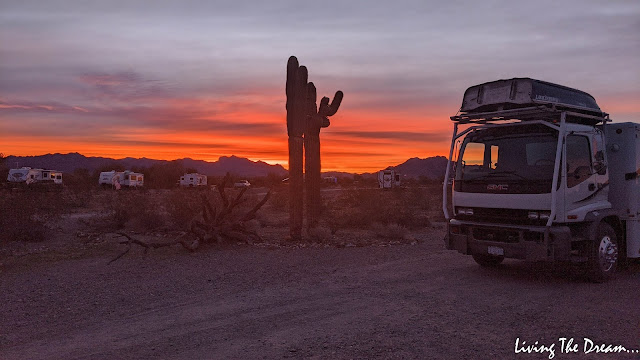 Like  yesterday, we had a calm start to the day but by late morning the wind had picked up and it was another blustery day!

We spent the morning inside...Steve editing pictures, while I crocheted. After lunch, Steve loaded the propane tanks into the truck and we headed into town to RV Pit Stop to have them filled.

Before heading home, we thought we'd do a little drive around...stopping at RV Lifestyles and checking out some RV's, side-by-sides, and of course, the parts department.

Great day for some unique kite flying....we could only make out the shark, cat, and dolphin... 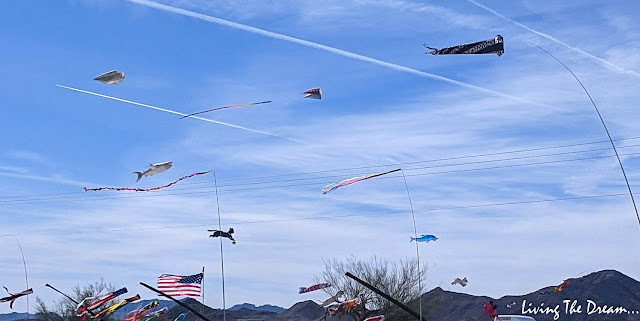 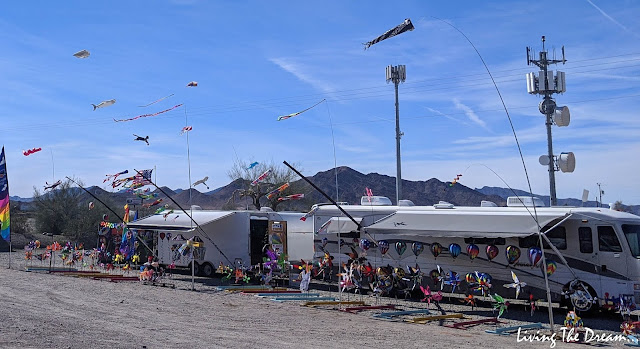 We spent the rest of the afternoon huddled inside out of the wind...a pretty relaxing day!

Thursday (Feb. 6) was a beautiful day...the wind had finally subsided somewhat. Shortly after 10:00 we walked over to Dave and Leslie's and climbed into their truck...we're off to Buckeye and Avondale (western outskirts of Phoenix).

Dave and Leslie had an appointment with a mobile computer repair fellow...the part to repair their laptop had come in. So we met him at Booty's Wings, Burgers and Beer in Buckeye...he sat at a table working on the repair while the 4 of us sat at the next table enjoying some of the best wings we've had. You guys were right, they are delicious! 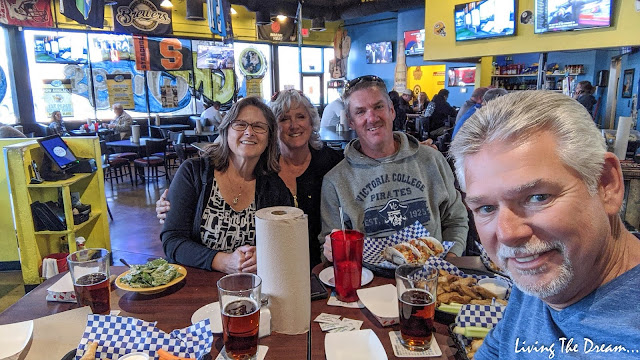 Unfortunately, the repair didn't go so well...they had shipped the wrong part! Now they are hoping the new part will arrive before their planned departure from Quartzsite. Fingers crossed all goes well...and we have another trip to Booty's??

Next on the agenda was a trip to Costco...a few more miles east, in Avondale. Les and I did a quick shop while the guys decided to go to Total Wine...Steve had never been to the giant warehouse of alcohol. Unfortunately, though, they couldn't find it and Les and I were waiting patiently outside to be picked up.

We arrived back at camp at 4:30...quickly put our purchases away, loaded our chairs and beverages on our quads and rode down to Ray and Deb's. It's their last night here so we had a nice little happy hour gathering...Steve, Deb, me, Cheryl, Dave M, Dave R, Leslie and Freya...(Ray's picture) 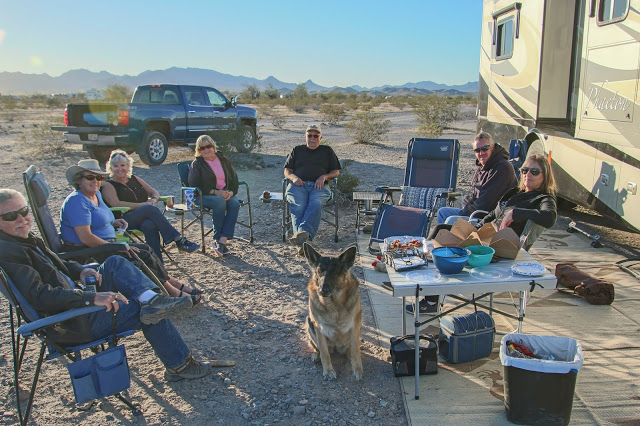 Safe travels tomorrow, Deb and Ray! Great having you here for the last 6 weeks...see you back in BC!

Posted by Dianne and Steve at 9:19 AM