Steve called Brian at Midway Chev to see if we could bring the truck in today...that way they'd have it for a cold start tomorrow morning. We've had the truck into Midway a number of times over the years regarding that famous "squealing noise", so they know the truck and can hopefully figure out the most recent issue that came up when we were at Carlsbad...upon a cold start, Steve has to pump the gas pedal to keep it running. Hopefully it's just a fuel filter issue.

Brian thought that was a good idea, so after showering and breakfast, Steve went out to off-load the quads. Rain is in forecast for today and tomorrow but it's supposed to be back to sun on Saturday...so we're hoping to get out for a ride with Dale and Chloe. We expect to have the truck back by then but figured he should off-load the quads just in case.

We headed out about 10:00, following Dale and Chloe to the Tonto National Forest Office to pick up some permits to ride in the area they are planning on taking us to. There is no cost for the permits, but they are required.

Once that was done, we continued onto Midway Chev….on the other side of Phoenix. Brian, the same fellow we have always dealt with greeted us. Steve explained the issue...and then asked if there was any possibility of getting a loaner car to use while they have our truck. Well...they have an in-house rental company, and he authorized a car rental for us...sweet! That was wonderful, but we ended up having to wait almost an hour and a half for it to be ready...sheesh! Oh well... We were happy when a 2019 Chev Equinox pulled up! A very nice little car...and the first time we've had a car with free WiFi in it!

As we left Midway, our first job was to find a place for lunch….so we went to a plaza where there is a Sports Clip. Steve needed a haircut, so after burgers at Caveman Burgers, he went for his haircut while I wandered through Safeway, picking up a few things.

After his haircut, we went back into Safeway where we both got a flu shot….no wait…$20.85 each. We will be flying home in a week, so hopefully it will help as defence against all the recirculated air on the airplane!

By this time it was going on 3:00…wow, where has the day gone? We were going to stop at Camping World for a new vent for the trailer but we got stuck in heavy traffic so decided to just go home...arriving shortly after 4:00.

We wanted to take Dale and Chloe to dinner, so they suggested a popular local pub...The Handlebar Pub and Grill. What great place...and very busy on this Thursday night! We enjoyed a couple of beers from the extensive list, and dinner. A great spot...thanks for showing us one of your favourite spots Dale and Chloe! 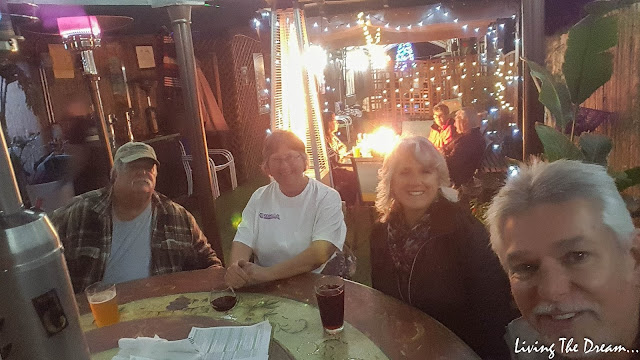 We had a slow start to the day Friday...and then decided to do our resistance exercises, something we have been neglecting lately. Steve also managed to get a picture of a coyote from inside our rig wandering through the field right next to us... 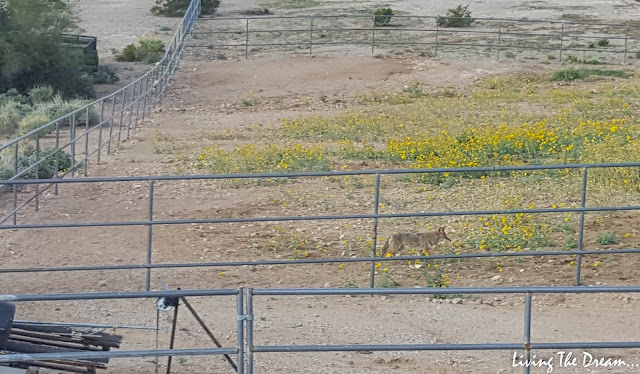 After breakfast, I decided to pack up all of the laundry, pile it in the trunk of the car and take it to a laundromat in town. Thank you, Chloe and Dale for offering the use of your washer/dryer but with so much to do, it was easier to just get it all done at once.
exhaust fan. The ones Steve has found are so cheaply made that he decided to see if he can find a better made one on-line.

When we got home, Dale was loading their side-by-side onto a trailer. Once he had finished that, he brought down their other truck, hitched up another trailer...and Steve loaded our quads onto it. Our fifth-wheel down there, with the rental car beside it and our quads all loaded onto the trailer, ready to head out in the morning.... 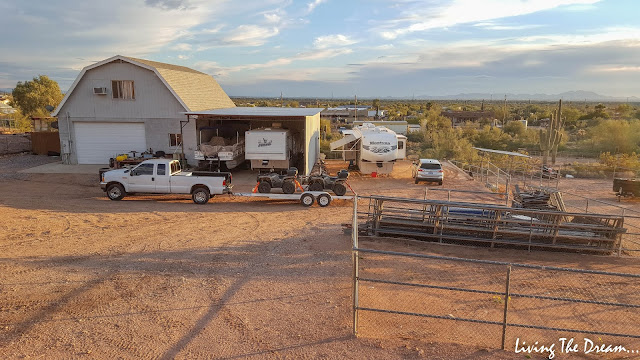 With the work done, we walked up to the house and enjoyed happy hour with Dale and Chloe...while Dale monitored the Tri-tip he had cooking on the smoker. 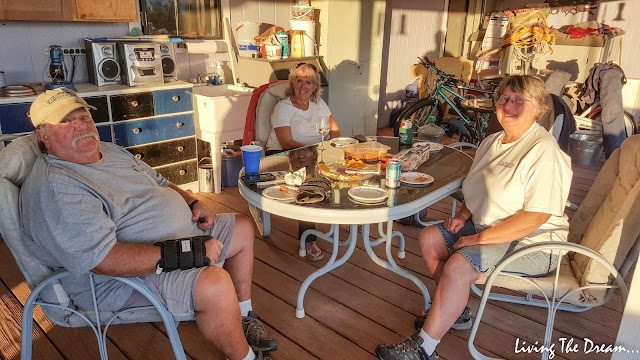 A friend of Dale and Chloe's joined us for dinner tonight...Bob will also be joining us on the ride tomorrow. Beautiful sunset and cloud formations this evening... 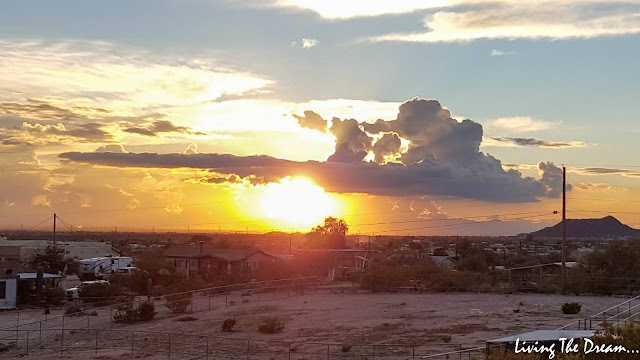 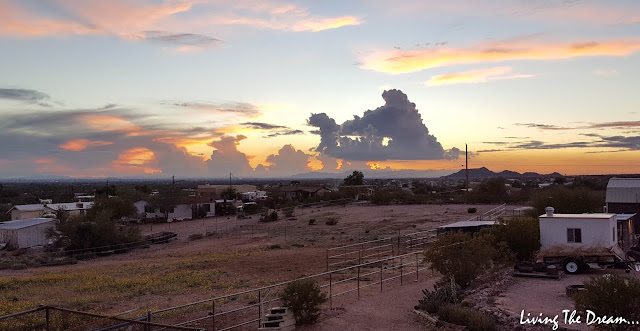 After a delicious dinner, Dale got a campfire going and we sat outside...a lovely evening!

Posted by Dianne and Steve at 2:59 PM