The last few days have not been too terribly eventful...things are certainly winding down here in the Quartzsite area. So the days have been pretty laid back, taking care of some chores...along with lots of relaxing. We have had a couple of get-togethers in the evenings...so our happy hours have not been completely solo.

Wednesday was a chore day....Steve did his weekly "pump and dump" with the poop-mobile. While he was doing that I did some housework and then cleaned out some old papers that we had been keeping...ready for one of Brian's big bonfires. I also gathered some things we've been lugging around...ready to take down to the "free stuff" box at the gatehouse.

At 5:00 we rode our quads down to Les and Sue's place for a wonderful feed of Alaskan Halibut and Salmon! 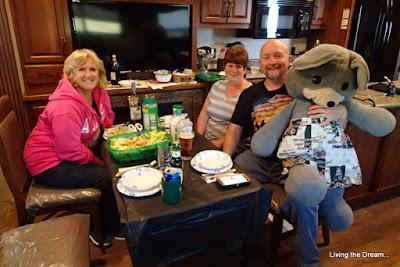 Me, Sue and Les, with Popo the Rambling RV Rat... 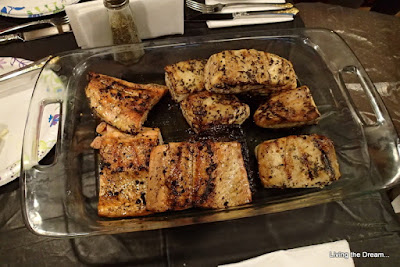 After a delicious dinner, we were treated to Sue's incredible baking for dessert...double yum! We had a wonderful evening...thanks for the invitation, Les and Sue!

Thursday started off with a super lazy morning...we watched a bunch of TV programs Steve had PVR'd. After that we had breakfast and decided we should get out for a walk. I started off great but it wasn't long when...bam! my right foot packed it in. I hobbled home and remained in pain for the rest of the day.

I did some research on-line and think I have...Metatarsalgia is a general term used to denote a painful foot condition in the metatarsal region of the foot (the area just before the toes, more commonly referred to as the ball-of-the-foot). This is a common foot disorder that can affect the bones and joints at the ball-of-the-foot. Metatarsalgia (ball-of-foot-pain) is often located under the 2nd, 3rd, and 4th metatarsal heads, or more isolated at the first metatarsal head (near the big toe).

I had foot problems years (and years) ago and had special orthotics made to insert in my shoes. I still have them but it would seem they don't last forever...go figure! Guess I'll be getting more.

Needless to say, the rest of my day was spent sitting and knitting...Steve read for most of the afternoon, so all-in-all, it was a pretty relaxing day.

Friday morning after our usual start, we did our resistance exercises and after showers and breakfast, we decided to try another walk. I had my "old" orthotics in my hiking boots and a while ago I had purchased some "ball of foot pads" that I hadn't tried yet because of the sporadic nature of the foot pain. Today I thought I would give it a try, putting one in my right hiking boot...they were created for people who suffer from ball-of-foot pain caused by constant and excessive pressure to the area. They're designed to lift and separate the long bones of the arch, transferring pressure away from the ball of foot area.


So, with my knee brace on my left knee and the orthotics in my boots, we headed off. We thought we'd try something different for a change and headed out behind the trailer into the wash.

To start, here are a  couple of doves enjoying the bird seed scattered below our bird feeder... 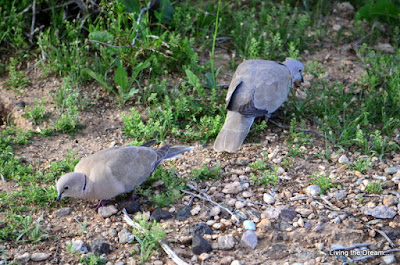 We found going down the wash was a great walk...a little difficult at times in the loose gravel, but for the most part, not too bad. The vegetation is incredibly lush this year with all of the rain we have had... 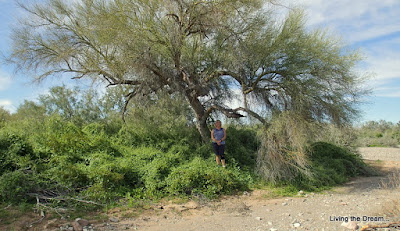 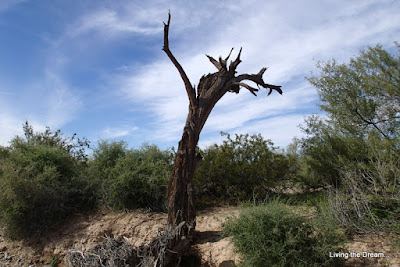 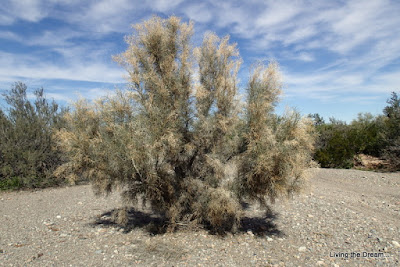 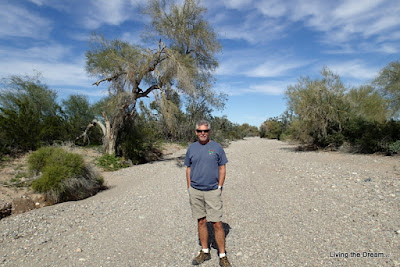 We've never seen such a short Saguaro with arms. It takes as long as 75 to 100 years before they grow arms... 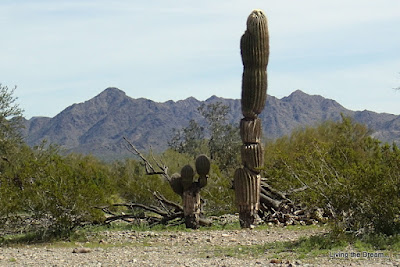 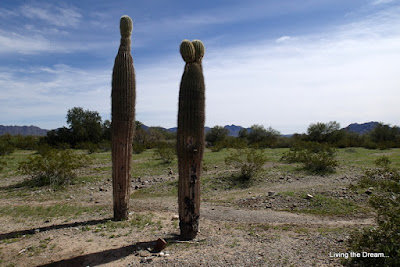 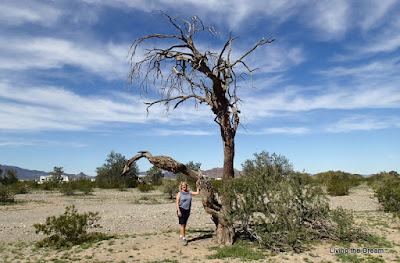 The desert is starting to bloom... 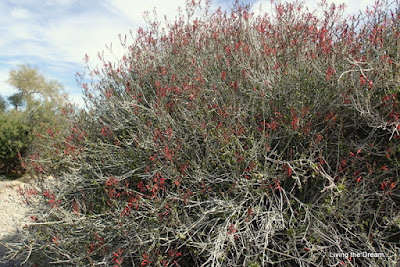 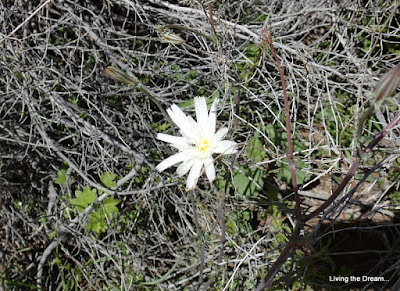 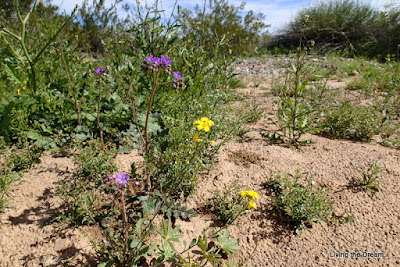 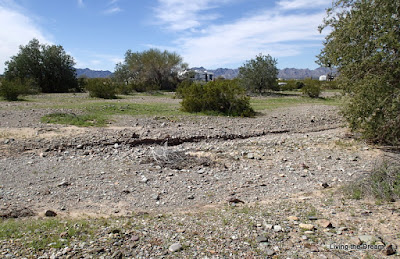 We walked for about 30 minutes and then turned around. Although I felt a couple of "twangs" in my foot, the old orthotics and pad seemed to do the trick...I was so happy! We arrived back at our place having walked roughly 3 miles. Steve took a couple of pictures of our camping spot from the wash. This is a very wide wash that continues for another 100 yards or so behind where Steve took this photo... 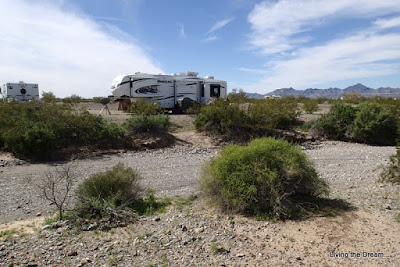 Once home, Steve decided to write a review of Shade Pro and put it on as many RV websites that he could think of. He had sent them a long email expressing his displeasure in their lack of customer service and had given them five days to respond (and perhaps try to rectify the problem?) but he has had absolutely no response. Thus his decision to write to RV Service Reviews. At least we aren't out any money!

While he was doing that I sat outside knitting. I thought I could smell propane and when Steve came out, he confirmed it...the tank must be almost empty. Weird how that happens when it's empty?? So we made an unexpected trip into town. While there, we also stopped at Roadrunner Market so I could pick up a few veggies.

By the time we got home, it was time to prepare for a happy hour over at Allan and Donna's (The Fergs). They are leaving in the morning and decided on one last get together. Les and Sue were unable to make it but Brock and Nathalie, fellow RV-Dreamers, joined us. They had just arrived at La Posa South a couple of days ago. We hadn't seem them since the Oregon RV-Dreams Rally in September, 2012. It was great seeing them again. 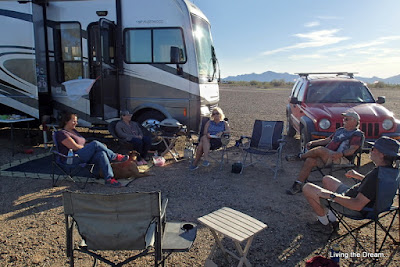 Needless to say, we spent a great couple of hours chatting and catching up. Nathalie, Donna, me, Allan and Brock... 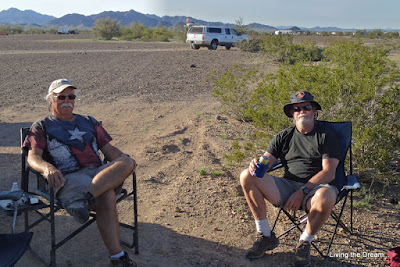 Shortly after 6:00, we packed our chairs back on our quads and after big hugs and handshakes, we headed home. Safe travels, Allen and Donna...see you next year!