Saturday was a warm day (77F/25C) but it was cloudy and quite breezy making it unpleasant to sit outside. Steve took advantage of the cloud cover in the morning and completed another chore on his "to do" list...clean and treat the seals on the "big" slide. With that job done, all slides had been cleaned and treated this season.

While he was doing that, I cleaned up inside and then sat down to write a blog update. I had it ready when Steve came in from finishing his work, so he could provide his edits.

The rest of the afternoon was spent relaxing...another "tough" day here on the desert!

Sunday was pretty much a repeat of Saturday...minus the work component for Steve. It was another "breezy" day making it unpleasant to sit outside, so we were inside for most of the day.

Watching our local news from Vancouver, BC this morning, we saw that the Greater Vancouver Area (aka..."the lower mainland") as well as Vancouver Island were having another dump of snow...yes, Environment Canada had issued another snowfall warning! Such a crazy winter this year...as I've said before, it is unheard of to have so much snow and below freezing temperatures in the lower mainland and island. It is the "Hawaii" of Canada where folks from other parts of Canada flock to to get away from the harsh winter conditions in other parts of the country (if they cannot be "snowbirds" and come down south). Normally, if there is a snowfall, it melts within a day or two. To top it off, we're into March now...and time for the annual Victoria Flower Count!

Our son, Chris, who lives in Coquitlam (suburb of Vancouver) sent this picture to us this morning...with a single word caption....."Sigh..." 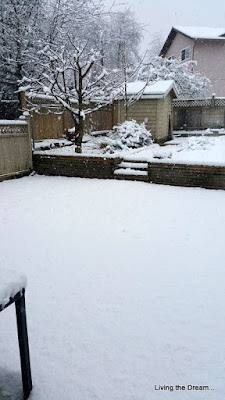 Mid morning we had a nice FaceTime call with my brother and sister-in-law (Dennis and Suzanne) who are in Indio, CA. Happy Belated Birthday, Suzanne...sounds like you had a good one!! Looking forward to seeing you in a couple of weeks!

I did some baking and prepared dinner in the slow cooker...while Steve relaxed in his recliner reading. By the time I was finished cleaning up in the kitchen...it was lunch time and time to dirty dished again!

We watched a PVR'd program on TV and then decided to get out for another walk in the wash behind us. This time we went in the opposite direction.

After a breezy night, we woke up to clear blue sky Monday morning. It was still a little breezy throughout the day but no where near as bad as it had been. 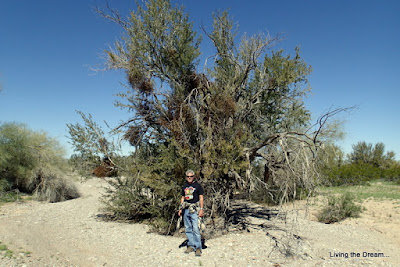 It was another lazy day for us. Steve did get a tank of fresh water for the trailer and I puttered around, doing this and that. We went for another walk in the wash... 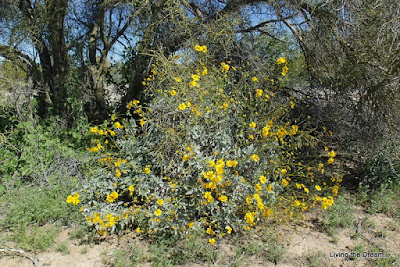 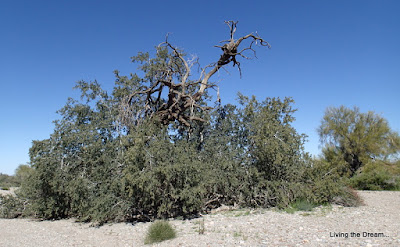 ...and other than that, we relaxed, read and even "rested" our eyes out in the afternoon sunshine.

Well, we've enjoyed three days of "RnR"...but with less than a week left, we'd better start planning our last days here to fit in what has to be done before we leave.