Saturday morning Steve researched and called RV places to see if he could find someone who stocked a thermistor for our fridge. It has been struggling to keep the temperature down. At first we thought it was just the heat and humidity at Reed Lake but with it at the coldest setting (9), it barely keeps the temperature in the 40's. We usually have no problem keeping the temperature at 5 or 6, occasionally up to 7 when down in Arizona. However, the freezer is working fine. Steve has done some research and found that the thermistor may be the problem.

He managed to find a place in Steinbach, about 40 kms south of here that said they had the right part...so off we went. Well, it turned out to be the wrong one! A hellava long way to go for nothing! We continued to phone around with no luck, and of course, it is the Canada Day long weekend now and most places are closed until Tuesday...sheesh!

So we gave up that idea and decided to go to Kal Tire. Steve has been kicking himself since we left Edmonton (no sales tax in Alberta)...he had fully intended to get new back tires on the truck to replace the aging 10 year old ones. He had them inspected while there and was told there was some sidewall cracking but they would probably be okay, but no guarantees. With the expense of the new inverter/charger for the trailer using up our tire budget, he decided not to get new tires. A decision that just wasn't sitting right with him, especially after all the rough roads we've been experiencing. So to set his mind at rest, we got 4 new back tires on the truck. Another big ding in our wallets $3400! 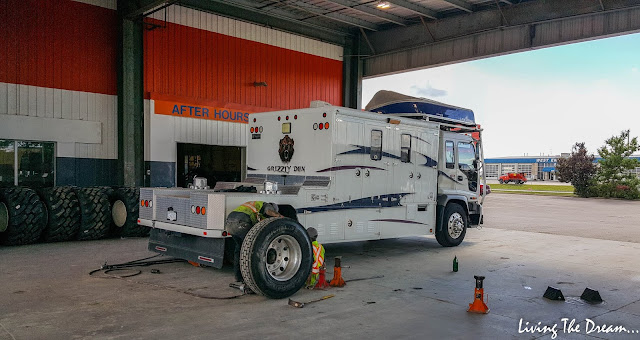 Because there were a few semis ahead of us, and a couple of newbie employees in training it ended up being an "all afternoon event"...arriving at around 12:30 and not getting out until after 5:00!

Sunday...and the first of 2 major work days! Steve washed the truck while I did laundry and started working on blog updates.

We started by taking the boat off...it has to come off for a servicing appointment Tuesday. Steve had quite a time getting all of the bug splatter off the front of the truck... 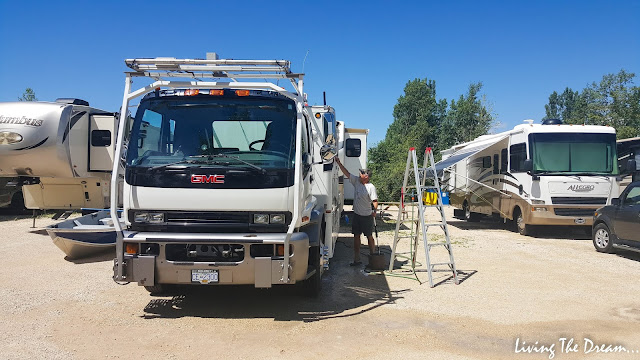 Meanwhile I have laundry hanging from the awning drying.... 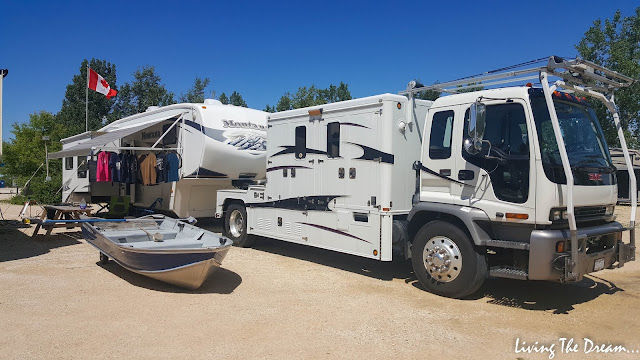 A thunderstorm was in the forecast but it just missed us... 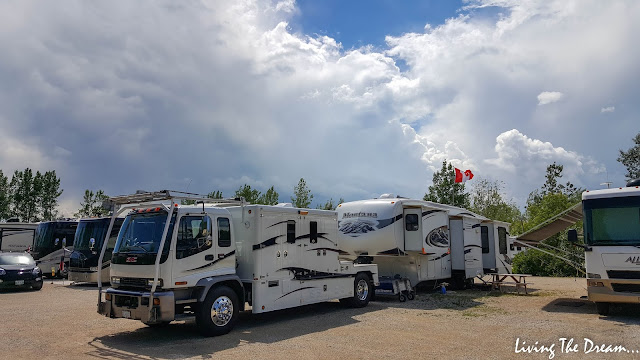 Monday...and another work day. Steve started working on the boat loader rollers. With all of the rough roads the rubber hose that covers the rollers has worn through so that we had metal on metal and the pounding has damaged the gunnel on one side of the boat. He took the rollers apart and reversed the rubber hose so it was as good as new again. 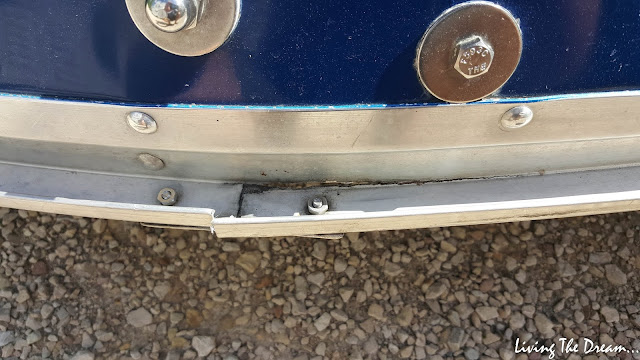 Tuesday morning we were up and out by 8:00 to take the truck into Vickar Isuzu for it's 150,000 km service. Lube, oil, front wheel bearing adjustment and a new air filter. The techs were great to deal with and allowed Steve to hang with them. 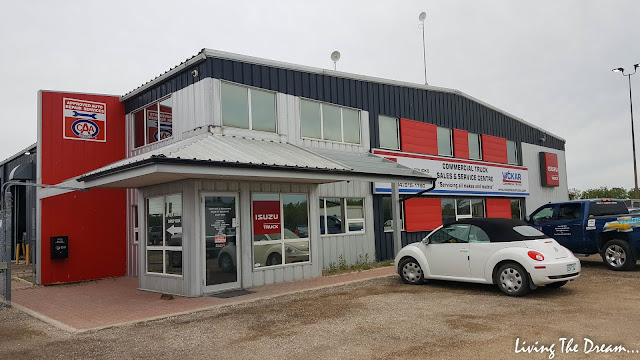 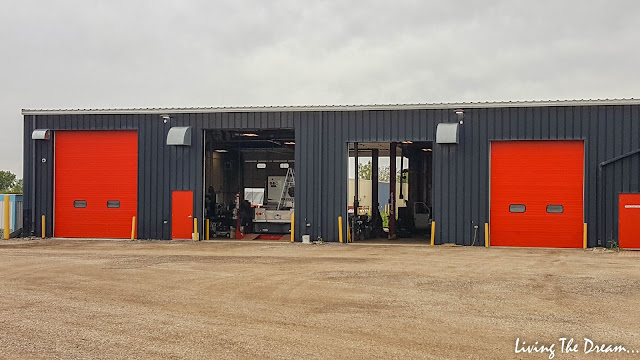 A few hour later and after another big bill, we were on our way...next thing on the agenda was to go to a welding place to see about getting the boat welded. Anything Custom were very busy but said they could get it done after hours tonight. So we headed home for lunch and to load the boat back onto the truck. 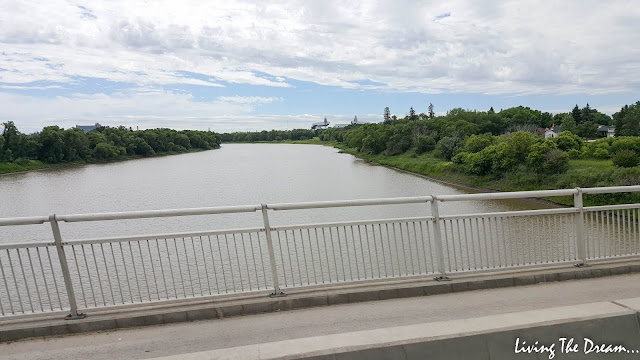 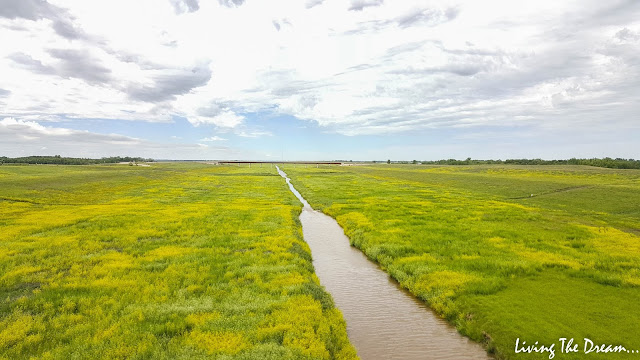 On the way to drop the boat off, we stopped at St. Vidal Centre to run a couple of errands. First of all, we needed an SD card for our GPS...in order to download all of the North America maps, more storage was required. We found what we needed at The Source.

Next stop was at Bell Mobility. We currently have a Telus plan on our mobile internet hotspot (MiFi) but the only plan they apparently have has a maximum of 10 GB and is just not enough for us. I checked out Bell's website and in addition to a plan similar to the one we currently have, they have a "Plus" plan for heavy internet users. It sounded perfect...and with coverage similar to Telus (at least it seems so according to their coverage map), we thought we'd switch over to it. We own the device and all mobile devices are supposed to be unlocked now, so it shouldn't be a problem...right?? Wrong!

The representative started opening an account for us but was having trouble getting the plan connected to it. So after a long telephone conversation with Bell troubleshooting, they discovered that the device can only be used with the carrier it was purchased from...what?!! We thought all mobile devices we're unlocked! Well, that thoroughly pissed us off....I spent the rest of the afternoon drafting my next move in my head. That is absolutely ludicrous! Well...finding all that out took over an hour, what a waste!

We dropped the boat off at Anything Custom and then headed home...it had been a long hot day! Steve also continued calling RV places for a thermistor but nobody in the Winnipeg area stocks it...unbelievable! At least our fridge is still working.

Wednesday morning we were woken by the big boom of thunder...it was 5:00. So we got up to watch the show...the sky was continuously lit, like a strobe light and the thunder was a constant rumble with occasional booms! What a great display!

After about a half hour or so, the main electrical storm had passed then the wind and heavy rain started for about 15 minutes. A couple of hours later, it was sunny but still very windy.

Unfortunately as a result of the storm, the park's internet was down. We had exceeded our Telus plan and not wanting to pay 5 cents/ MB overage charges, we paid for the park's wifi. So to have it down was a big disappointment!

Today was shopping day. But first we went to Kal Tire to have the tires torqued.  We got a call that the boat was ready so we went to pick it up... 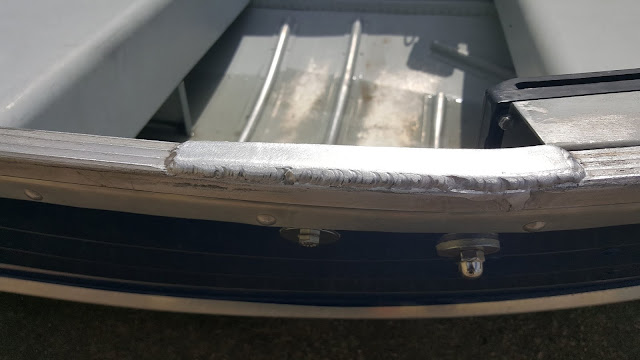 Then it was Costco, the liquor store, Walmart...and finally home.

And that brings us up to date for now. Tomorrow we are moving out to a casino near our daughter-in-law's (Angie) parents place (Lake Winnipeg) for a quick visit before we continue on our journey east.