Monday was another beautiful day...but a look at the forecast says it's not going to last much longer. Apparently rain and wind and cool temperatures are coming in tomorrow.

The morning just zipped by...which happens regularly in this lifestyle. By the time we had our 2 hour morning coffee start, did our resistance exercises, had a "big" (i.e bacon and eggs vs cereal) breakfast, and showered...well, it's going on at least 11:00! And time to get out for a morning walk.

Steve spent the afternoon "unpacking" the poop mobile, pumping up the tires, rinsing out the fresh water barrel...and then topping up the water in the trailer. He also dusted off the truck and trailer in preparation for the rain tomorrow...he's hoping the rain comes before the wind!

While he was busy with that, I was inside working on a variety of things...from blog updates to banking.

We were ready when Dale and Ruth came by to pick us up....we're meeting Steve and Debbie at Silly Al's for dinner. They are camping with Debbie's brother and sister-in-law, Steve and Diane, in the Kofa National Wildlife Refuge south of here. Steve and Diane are only in the area for a few days and Debbie and Steve wanted to give them a quick tour of the Quartzsite area (we actually saw them briefly this afternoon as they drove through La Posa South) followed by dinner at Silly Al's.

Left to right, around the table...Debbie, Steve, Steve, Diane, Dianne, Steve (sound like I am stuttering LOL), Ruth and Dale... 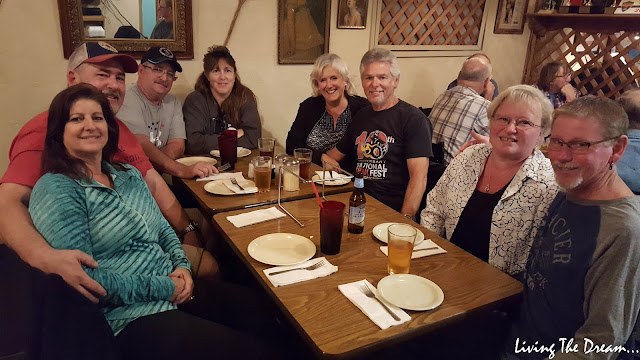 Look at the size of that pizza! 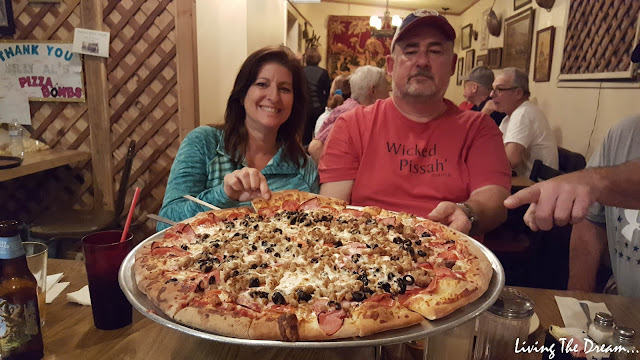 We had a great time....hard not to with great company and great food! Steve and Diane are continuing east on Thursday and Steve and Debbie will be moving over here to La Posa South...looks like they will be the first of the group we are expecting to arrive here over the next couple of weeks...and they get the spot next door to us!

Our drive home was hilarious! Driving off the main road once in La Posa, in the dark, can be quite a challenge! It all looks so different and finding the right roads is really hard. Poor Dale...taking directions from Steve...and me in the back seat. We managed to get completely turned around, making a left too soon and starting to drive into someone else's spot...having to back up. We finally found familiar RV's in our neighbourhood...and home! Thanks for the ride, Dale and Ruth!

It was a beautiful start to the day Tuesday...sunny, warm and no wind...yet! We got out for a nice long walk and had no sooner returned home when the wind started up..."just like that"! 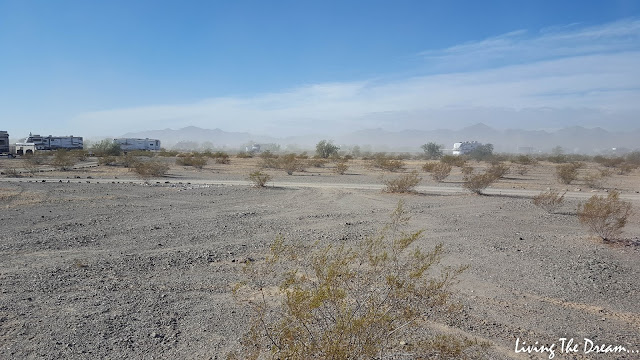 Amazing how one moment it is calm and the next it's howling...with a great gust whipping up the dirt. 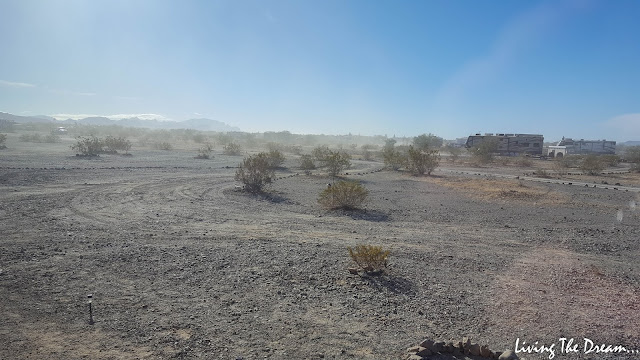 Larry, the fellow here in Q that fixes day/night shades, called at about 1:30 to say he was here, so Steve had to go out on his quad to meet him and escort him to our place. I was surprised that he would come out in this weather since he does all of the work out of the back of his pickup truck. But he managed to park close to our truck, using it as a windbreak. After chatting for a bit, he got to work on repairing two of our small window blinds. As he was finishing the second blind, the rain hit...and my goodness, did it pour! Larry ended up staying dry by climbing into the truck to finish his work. We've used Larry's service for the last 3 or 4 years and have never had a failure. He has a lifetime guarantee and can be contacted at 928-273-3719.

Look at those bushes leaning in the wind, and here comes the rain! 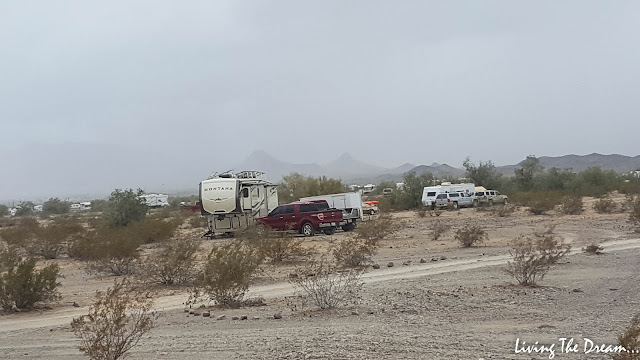 Well...that should keep the dust down for a couple of days! 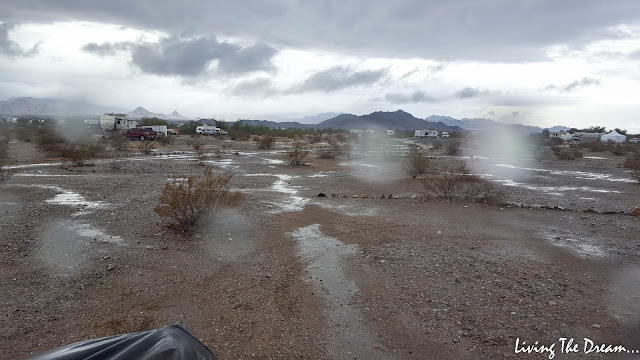 Wednesday we were back to blue sky. I got out for a morning walk and the air smelled of fresh desert...and was much clearer, the dusty haze gone.

Steve went up on the roof of the trailer and took this short 360 degree video of the area around us... 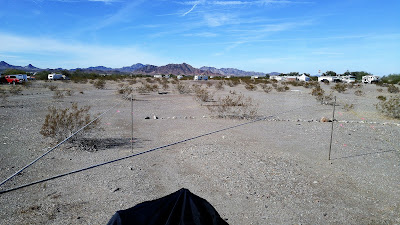 Our task for today was to put up a clothesline. As in previous years, Steve anchors it to the ladder on the back of the trailer...making the line a big triangle. There...ready for business! Guess I'm going to have to make a trip to the laundromat in town early next week...


The rest of our afternoon was spent doing odd jobs...I went through a couple of cupboards for items that I didn't use anymore so I could take them down to the entrance gatehouse where they have a "free" box. Steve got his hammer and nails out and fixed the bottom of the dining chairs. The seat lifts for storage inside but, like so many other things in the trailer, they use staples...which are coming out. So Steve reinforced all with small nails.

At 4:00, Jim and Cec joined us for happy hour. They arrived yesterday during the wind storm...at least it was before the rain! Jim and Cec are from "home"...Vancouver Island and belong to the ATV club we used to be part of...Cowichan Valley ATV Club. 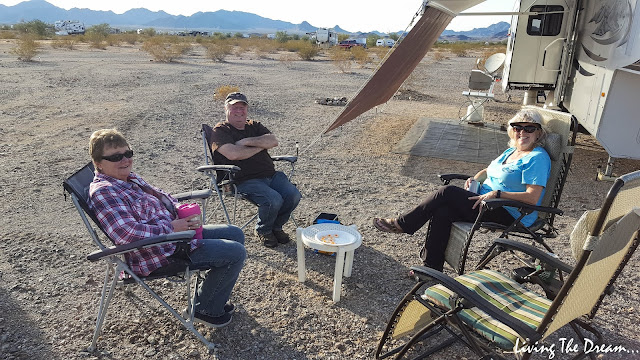 We had a great visit...and made arrangements to head out for a quad ride Friday.

Thursday was another gorgeous sunny day. We had a few errands to run today and then thought we'd take a look at some of the vendors.

We started off with a stop at the ATM at the local bank, filled our water containers at the kiosk, then Steve got his hair cut...followed by filling up the gas containers at ARCO. After those chores were done, we parked the truck in the large lot at the end of the vendors on Kuehn Street. We crossed the street to the vendors on the south side and Steve checked out KB Tools while I went through a couple of other vendors.

After that we thought we'd see if the fifth-wheels that have been brought in for the RV Show were open for viewing. We wanted to get an early look before the crowds. The "big tent" is up...and the area around it is all marked off for the outside vendors... 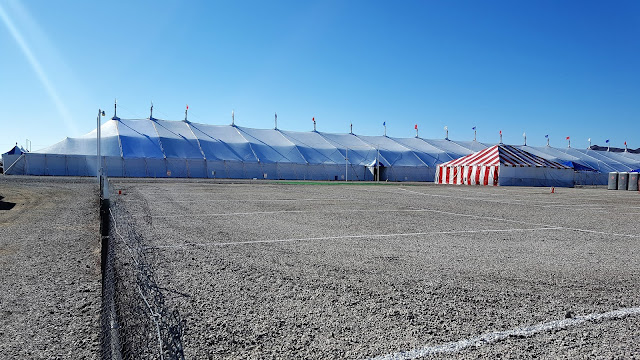 The fifth-wheels were open, so we had a fun time going through them...mainly Montanas and Grand Design Solitudes. It's interesting checking out all of the new floor plans...some good, some not so much. 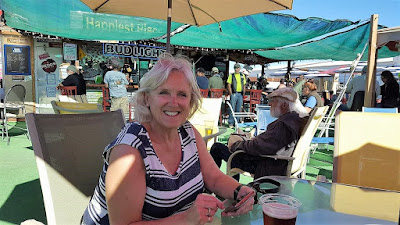 On the way across the street to the vendors on the other side, we had to pass Beer Belly's...so we stopped for a cold bevie (surprise, surprise)...

After our "rest stop", we continued across to the vendors and ended up buying a new, larger outdoor mat. When we went to drop it off at the truck, we decided to call it a day...we have lots of time to check out the other vendors. Instead, we headed over to Main Street and picked up a flag pole and flag...something Steve has wanted for the trailer for some time!

Back home, Steve set up our new mat. Looks good! 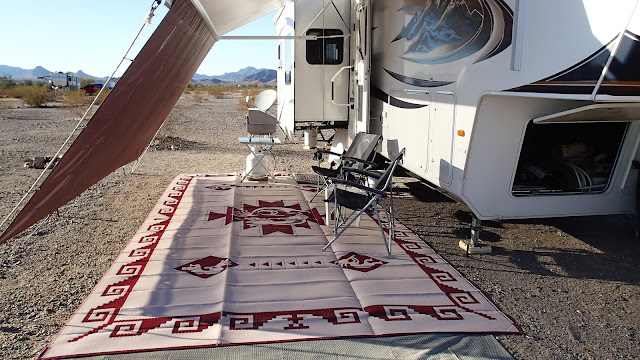 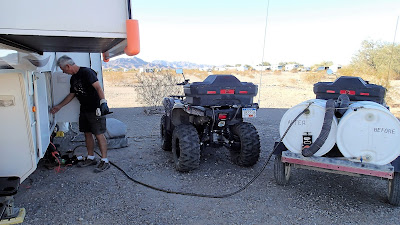 Next on the agenda was to dump the holding tanks... 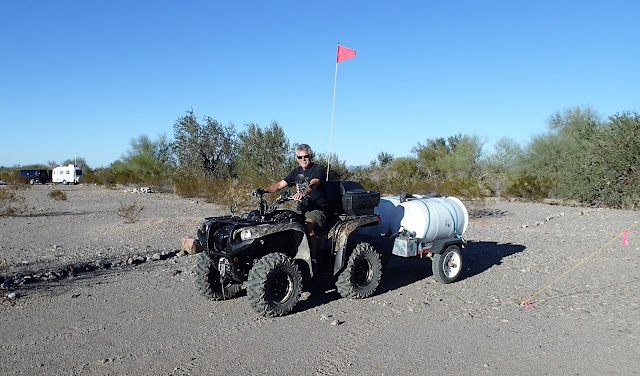 And finally, with the work done for the day...time to relax in the late afternoon sunshine...(notice we extended our "patio" with our old outdoor mat)... 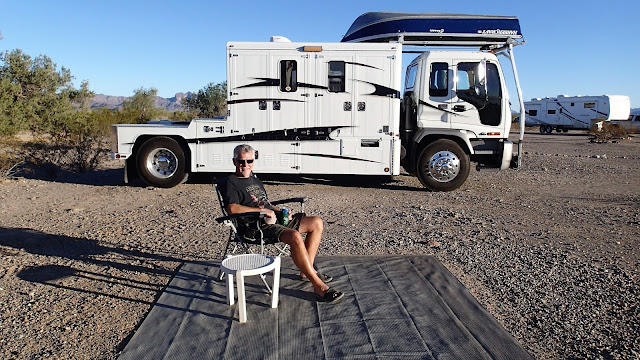 Tomorrow we are planning a day out on the quads. Looking forward to it!