Monday was a long day. Steve decided to give Derek at Rush Truck Center a phone call right at 8:00. The baking of the DPF (diesel particulate filter) was successful however they were waiting for the DPF gaskets to be delivered and expected them sometime between 10:00 and noon. Steve made it clear that we needed the truck today...we would be there a little later.

So we headed off south down the I-15 to Fontana, CA. It was a beautiful day... 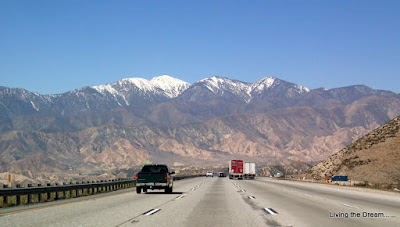 We arrived to find out that the DPF gaskets had arrived...and it was going to be at least an hour or so for the mechanic to put it back together. So the waiting began.

It was around 2:00 when they were all finished...and all seemed fine after their test drive. Steve spoke with the mechanic and was told the back pressure readings from the plugged DPF was 13 kpa and now it's between 7 and 8 kpa. We paid our bill....which tacked on about an extra half hour of anxiety when both of our credit cards were declined.  After a phone call to Visa, we discovered that the girl taking our payment hadn't asked for our PIN number....sheesh! Okay, to be fair, chip technology is new in the US.

I followed Steve back to Barstow, dropped the rental car off and before going to the campground, we fueled up the truck. So far the truck ran fine with no squealing, however we've been here many times before, so need a lot more miles on it before we declare this as a fix. As soon as we got back we got to work...loading the boat back onto the truck and preparing to leave first thing in the morning...Yay!