We were up and ready to hit the road shortly after 8:00 this morning. Before getting back on the I-5, though, we made a quick trip into Marysville to the local Co-op store to pick up a supply of Fresh Cab...we're hoping to be able to deter as many mice from coming into our rig this summer while we're up at Tunkwa Provincial Park. Steve will have his "outside pail trap" set up too.

The Skagit River is high... 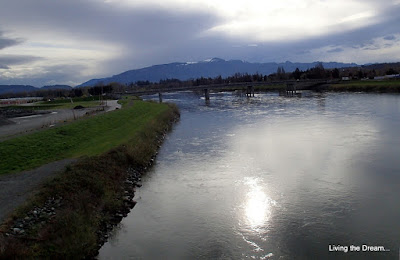 We stopped in Ferndale, WA to top up with diesel...the same Pilot station that we stopped at on our way down. $2,75/gallon...last fill up at that price for a while!

It was still fairly early and a look at the wait times at the border crossings showed that the Pacific Border crossing had no delays...so rather than take the longer route through to the Lynden/Aldergrove crossing, we decided to continue the short distance up I-5 and hope "they" were right. From past experience we've learned that no matter what the border wait times say...at a minimum triple it!

We pulled up just as another truck and trailer was leaving, so we went right up to the wicket. Wow...that was a first! He asked us a couple of questions and we were through the border and into Beautiful BC within minutes. That was the fastest border crossing we have ever experienced!

It was about 10:15 when we pulled into Peace Arch RV Park. We registered, our site was empty...so we pulled right in and started to get set up. Of course, it was raining and high winds were in the forecast...welcome back!

When it came to setting the satellite dish up...we had one heck of a time finding a signal. Our site is right next to an large electrical box and that seemed to be the best place for Steve set up the dish...unfortunately, every time he thought he had it pointed correctly, he'd check with the dish finder app he uses on the iPad and the satellite would be in a totally different location. To top it all off, he had a very small window between some trees to try to latch onto the signal. About an hour and a half later...after moving the dish four times he gave up on that location and moved the dish to the other side of the truck and finally snagged onto a signal ...yay! 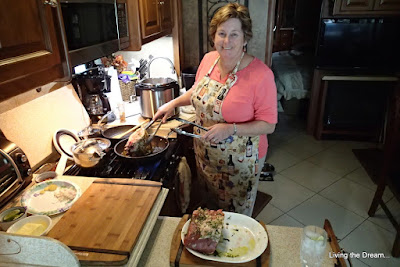 Just before 4:00 we joined Deb and Ray (who are in a site one row behind us) at their place for some catching up over drinks...and then a wonderful dinner. Deb used her new Instant Pot to cook the Pork Rib Roasts. She raves about her new Instant Pot...I might just have to get one, but I really don't know where I would store it in the trailer. 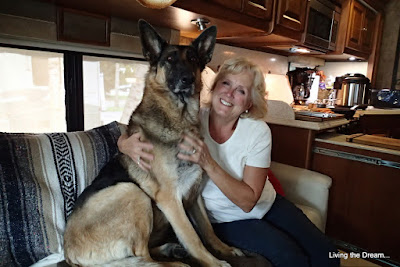 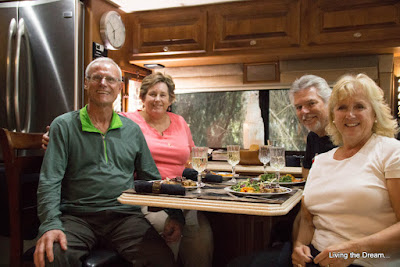 DELICIOUS! You out did yourself again, Deb... 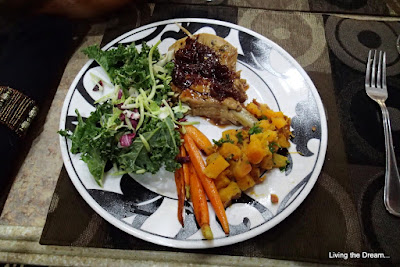 After dinner, we chatted for a little while longer and then it was time to call it a night. Thanks for a wonderful evening and dinner, Ray and Deb, it's great to see you both again....and although the weather is wet, it's still great to be back home!