Happy Thanksgiving to all of our American Friends! 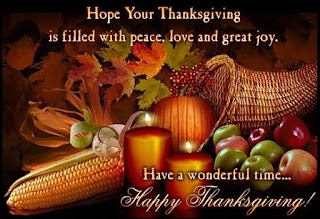 It was chilly when we woke up this morning...44F/7C outside and 52F/11C inside...so Steve fired up our new heater. It's comes with everything for either wall or floor mount, has dual pilots for propane or natural gas, built in fan with a fan switch for manual on/off or auto, ODS pilot for oxygen depletion sensing, electronic ignition, and the thermostat heat control automatically cycles the burner on and off. 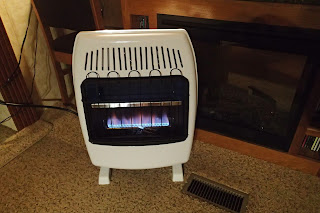 So far it works great...glad we have it because the temps are supposed to dip down close to freezing overnight for the next few nights. The daytime highs are forecast to be hovering around the 60F/15C but nice and sunny.

Steve had a work day today, accomplishing lots...changed the oil on the generator, set up the additional solar lights we bought yesterday to mark our turf, wired up our new macerator pump, wired a 25' extension for our extra water pump so that he doesn't have to carry a battery around when filling our fresh water tank from 5 gallon jugs. He also incorporated a 12 volt cigarette type receptacle so that we don't have to power the water pump on Earl's poop mobile from the quad.

Late morning, we walked over to say goodbye to Rob and Peg. They are heading on an adventure down the Baja to Cabo San Lucas...with their fifth-wheel. Something we would love to do. All the best, guys...looking forward to hearing all about it!

I puttered around cleaning up inside and doing some stuff on the laptop. I also finally got out for a good walk...3 miles and 45 minutes....that felt good!

We also went across the road to visit Art and Jan and wish them Happy Thanksgiving. We had a nice chat with them and then returned home to relax for the rest of the afternoon...Steve even laid out in the sun for a bit.

We started our Friday off in our usual way, did our resistance exercises, had breakfast, showered...and finally, we were ready to head out on our quads. We were going to do a little geocaching but I had trouble downloading them onto my GPS. I'll have to work on that another time...for now, we're just going to go out for a ride. 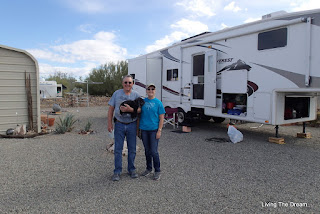 We ended up heading towards Rainbow Acres and thought we'd pop in on Rich and Tedi. They were neighbours at La Posa but bought a spot in Rainbow Acres and had just moved over there this morning. They have a very nice 1/4 acre lot with hookups for 3 RV's, a metal garage and a shed... 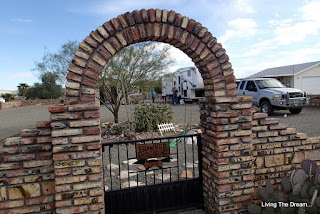 We chatted with them as they showed us around...and then we continued on with our ride, leaving them to get squared away in their new digs. 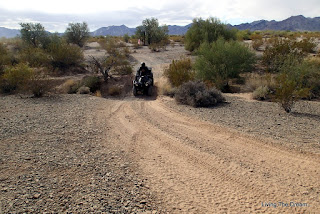 We ended up taking a trail that led to these two old stone cabins. I never have been able to find out an 'official' name of what they once were...but they are up on a hill overlooking the Dome Rock BLM camping area. 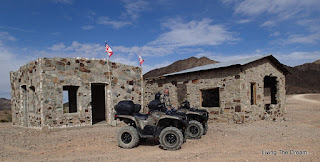 After that we, decided to head over to the old Erdman Mine... 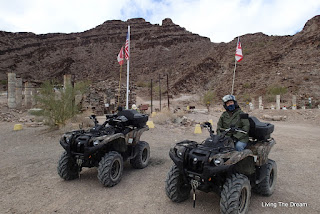 There were a lot of campers there...not sure if they were actually mining or just gathering together for the Thanksgiving weekend. 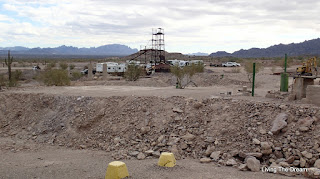 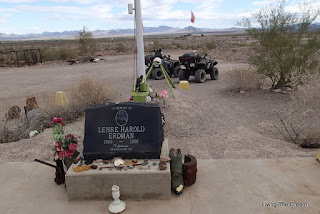 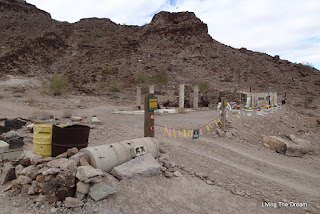 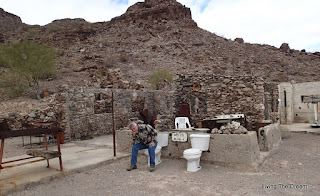 After that we went back to the stone cabins, carrying on past them through the hills back towards the LTVA. 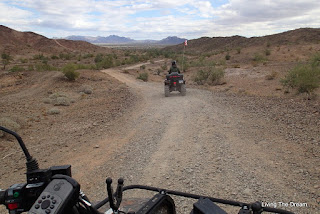 We got home just after 2:00...very nice getting back out on the quads again! We had a bowl of soup and then Steve headed outside to figure out where to string up our new solar Christmas lights. I sat down at the laptop and went into our account on geocaching.com to see if I could figure out what the problem was with the 'pocket query' I had run. I created a query for all geocaches that we hadn't found in the area but when I downloaded the finished query, it showed all of the caches that we had already found. I started all over again, going through each step and discovered that when I preview the submitted query, the info is correct, however, once it is downloaded to 'EasyGPS' (the program I use to transfer the download to our GPS's), it shows all geocaches as unfound, even the ones I have found. This has never happened before so I don't know what's going on...I'll give it a rest, and try again tomorrow. I might have to ask Bob or Earl what I am doing wrong. Sheesh!

While I was working on the laptop, I did take a break and go out to help Steve. After tossing a few options around, we finally decided to put up the lights on the big Palo Verde tree near the road between Earl/Allison and Art/Jan's place. 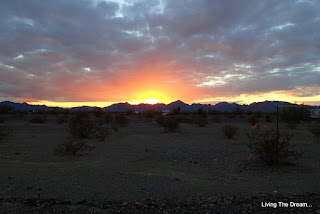 Steve captured some shots of our sunset tonight... 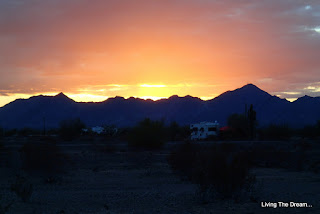 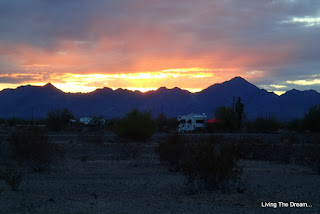 Hard to see, but here are our Christmas lights...they almost look like they are in the shape of three Christmas trees...(ya, that was planned...LOL)... 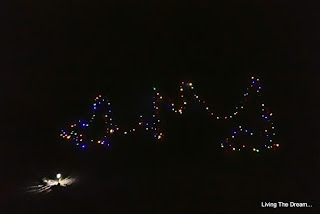 We got up to a nice warm trailer Saturday morning...with the temp supposed to go down to 36F/2C last night, Steve decided to put the heater on a slightly higher setting. We close the bedroom door so it stays nice and cool with the windows open.

Steve took over my laptop first thing this morning while having coffee...he started by editing all of the pictures taken yesterday, and then continued on to respond to an email about our truck.

It was mid morning by the time we decided to bundle up and head out for a walk. We started out by stopping to say hi to Allan and Janet...they had moved over into Rich and Tedie's old spot after they pulled out yesterday. We spent quite a long time chatting with them and then decided we'd better continue our walk.

By the time we got home, it was noon...time for lunch and then onto some chores. Earl and Allison have been delayed leaving Canada so won't be down here for a while yet...hopefully before Christmas but likely not until shortly after. He has graciously allowed us the use of his "poop mobile" again this year...thanks again, guys! So we went across the road to his spot and "un-summerized" it...darn! Earl isn't going to see how neatly we had put it all back together last spring before heading north! He stores outdoor carpets and chairs with it all bundled up and tarped. The fun part for us last spring was trying to figure out how he had tied it all together. We got it all apart and neatly piled the carpets and chairs and wrapped them in the tarp, leaving them on the ground. Next, Steve emptied the bit of water/bleach left in the fresh water tank and then took it over to get fresh water to rinse it...there, it's all ready to use! He was going to dump our tanks and fill the fresh water but decided to leave it one more day. 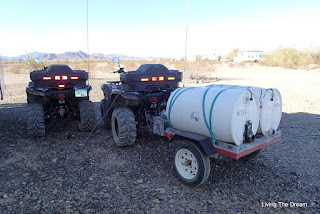 It's all ready for you, Earl...we decided to keep it in the shade over at our place...

Next on the agenda...Steve drove into town to fill our drinking water containers, while I got started on this blog.
Once back, Steve started the next item on his "to do list"...repair the underbelly of the trailer. A year ago last summer while at Peter Hope Lake, he had repaired it with Gorilla Tape. It held really well but was now starting to come apart. He wanted to get it fixed before we leave Wednesday...don't want an open spot for critters to get into our rig! 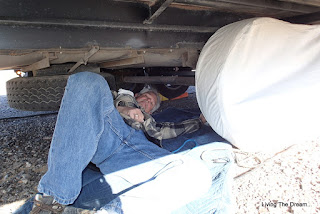 After I'd finished working on the blog, I put together a batch of muffins (Steve had been complaining that I hadn't done any baking for awhile)...and by the time I got them in the oven, it was time to sit outside with a bevie and enjoy the late afternoon sun as it headed down behind the mountains.

Posted by Dianne and Steve at 6:44 PM