We woke to another beautiful sunny day...and no wind! We were having our coffee and I was just about to download pictures so Steve could edit them before I started working on the blog...when the phone rang. We get so many solicitation calls on our TracFone that the number on the call display didn't register with me...Steve had to coax me to answer it...a 778 area code, right that's Rob and Angie's phone number!

It was Rob on the phone...Grandpa had passed away at 5:45 this morning. He had just received a phone call from the home where Steve's Dad lived. Steve's sister, Nadine, is the prime contact but she had gone over to Vancouver Friday to meet up with cousin Bev for a four-night cruise leaving Sunday (today). So, not able to make contact with her, they moved down the emergency contact list...and Rob was it.

Steve's Dad passing was not a surprise, we have been expecting it for some time, years even. He has suffered from chronic pain for many years and would have been 82 later this month on the 30th. However, I must say last September when we saw him, he was looking and feeling good...but a recent phone call Steve had with him was not good and the caregivers at the home had reported to Nadine that he was refusing to bath and take some of his meds. Steve had recently said to me that he had a feeling that this was going to be the year we'd get the news and have to fly home for a funeral.

So we started the morning of phone calls and travel arrangements. We were lucky enough to connect with Nadine before she and Bev left on their mini vacation...no need to cancel. Nadine will be back in Victoria Thursday night. I was able to book the last 2 seats on the only direct flight from Phoenix to Victoria...Westjet has a direct flight between the two cities every Friday. So we leave this Friday (13th) and return on November 20th. We will drive to Phoenix Thursday and stay the night in a hotel...and that became a bit of an issue. Next weekend is the big NASCAR race so the La Quinta Inn, where we can park and leave the truck for the week, said that they can't guarantee there would be room for the truck because it's a busy weekend. Since we will be arriving early Thursday, we decided to take the chance...hopefully, we will be there early enough to take up the parking spots needed for the truck!

I really want to give a 'shout out' to the grandkids who really stepped up in the absence of their parents (Steve and Nadine)...especially Rob who was the contact with the nursing home as well as the funeral home. The nursing home requires the room to be cleaned out of all belongings within 24 hours of death...and Rob, Chris (who happened to be over from Vancouver visiting for the weekend) and Amanda took care of it. Thanks so much!

Steve spent the rest of the day preparing to leave tomorrow...we are heading the short distance over to our spot at La Posa South in Quartzsite. So he was busy loading the quads into the truck and we also hitched the truck up.

Just after 4:00 we walked up to Charlene and Dennis' place for happy hour and dinner. We sat outside so we could watch for the Kit Foxes that come out when the sun goes down. 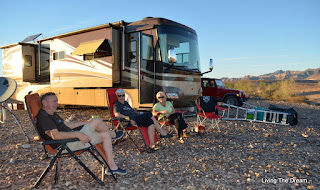 And they didn't disappoint...the sun was just going down behind the mountain when these two little fellows showed up for dinner. Dennis has a solar light on his weather station pole that lights up the food tray... 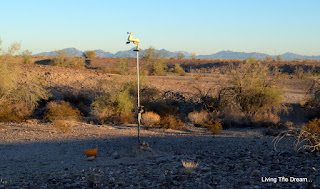 A few more clouds and it would have been an awesome sunset... 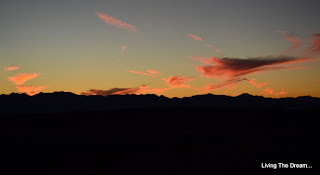 They were there for a long time...not at all concerned about us, even when Dennis got out his big floodlight to light up the area...they are too cute! 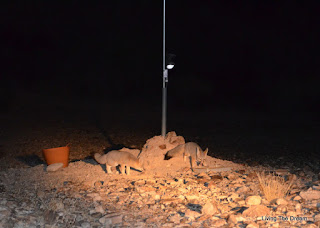 They are about the size of a large house cat... 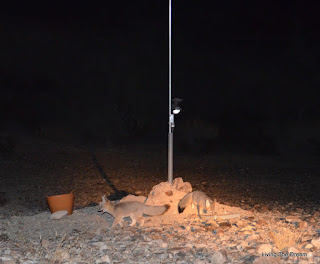 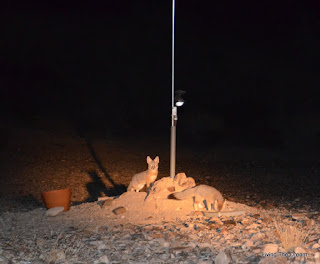 After Steve took umpteen million pictures (LOL) we'd had our 'Kit Fox' fill...and headed inside. We enjoyed another evening of good food and company...thanks, Charlene and Dennis!

We headed back home at about 7:00...and immediately returned a Skype call to Uncle Gord and Aunt Esther. Steve's Dad had asked him to perform the Service upon his death. They will be making flight arrangements and will be in Victoria by Saturday morning...for a small family graveside service, hopefully, Saturday afternoon...providing those arrangements are okay with the funeral home. They are supposed to be calling Steve back tomorrow (Monday).

Posted by Dianne and Steve at 7:51 AM