First thing Tuesday morning (well...after our coffee) Steve was on the phone. Since Utah is in the same time zone as we are right now, he started by calling RVZZ to discuss the repair job they did on our grey water system. No, we cannot take it back in to you...we are now in southern Arizona! Okay, have RV Lifestyles call them when they open up the belly of the trailer and confirm that the leak is, in fact, a result of their repair job. We have a feeling they are likely going to "try to talk their way out of responsibility"...but at this point, all we can do is hope they cover the cost of this third repair. I guess we'll just have to wait and see.

After that it was a phone call to the burial park to confirm arrangements and paperwork with them. Not only is there the funeral home to deal with but also the burial park. Thank goodness for technology these days...forms can be emailed, printed off, signed, scanned and sent back.

Then he sent an email to the funeral home confirming the service for Saturday. A little while later, another email with some questions. He'll have to wait for a response...so it was time to get onto some other things. He headed outside to offload the quads from the truck.

While he was doing that, I did the dishes, cleaned up inside, changed the bedding and then got the mountain of laundry that was piling up sorted and ready to go to the laundromat.

At about noon, we loaded the laundry bags into the truck, along with an empty propane tank and drinking water container...and headed into town. Steve dropped me and the laundry off and I commenced with a wonderful time doing laundry...while Steve ran all of his errands. When we were in Victoria we had forgotten our pocket camera at Rob and Angie's so had them mail it to us here at Quartzsite. Steve went to the post office and said that there should be a package for Dianne Colibaba and was coldly told by the lady there that General Delivery is between 11:00 a.m. and 1:00 p.m. and that Dianne would have to stand in front of me with photo I.D. Alrighty then...it was 1:20 p.m. The funny thing is that because we are flying back we could have just picked it up. Sheesh!

We were back home shortly after 2:00. Time for a bite to eat and then a walk. Unfortunately, our walk didn't amount to much. It was so windy out that it was really quite unpleasant, so we cut it short, stopped to chat with Bob and Sue for a few minutes before heading home.

By late afternoon we'd had no response from the funeral home, so a third email was sent off. A short while later she responded with an apology for the delay. It wasn't until almost 6:00 (our time) when we finally received an email with four attachments. I printed them off, Steve will read and deal with them in the morning.

We hunkered down inside for the rest of the evening as the wind whipped around the trailer...mind you, it did die down long enough for Steve to grill some pork chops on the barbecue. 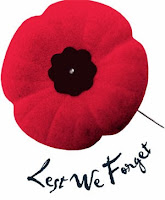 Today is the day we remember and thank all those that are currently serving and those that have served, for keeping us safe and free...especially those that made the ultimate sacrifice.

We woke to a chilly morning...it was 48F/9C outside and 52F/11C inside the trailer. I got up and quickly put the coffee and furnace on...and then jumped back into bed to wait for it to warm up a bit.

After our usual start to the day, Steve decided to tackle the paperwork we received late yesterday from the funeral home. While he was half way through the paperwork he was surprised to get a call from the funeral home on a stat holiday. Jamie just wanted to make sure that Steve got the paperwork and if he had any questions even though they were closed, that he could call her on her cell. Wow...great service! With that done, he headed outside to start on his chores in preparation for our departure tomorrow morning. He took our quads over to Art and Jan's and locked them up and put the covers on. Thanks for keeping them secure for us Art and Jan.

Once I had finished cleaning up the kitchen, I took over for Steve...emailing back the signed forms to the funeral home and getting the Funeral Service notification out to family.

After hitching up the trailer to the truck, that was basically all Steve could do outside for now. He came inside to relax for a bit. I sat at the table doing some banking and then I packed our suitcase. By this time, all that could be done today, was done. The rest will have to be done in the morning.

Bob popped over to see if we could come down to their spot and give him a hand. A few extra hands were required to help put up the poles for the 'storage garage' for their quads. Once the poles are up, he can take over and get the tarps up. He just needed help to get them up so that they didn't bend. It only took a few minutes and then we walked back, taking the long way around for a little exercise.

Bob and Sue came down at about 4:30 and joined us for happy hour. We sat outside enjoying the late afternoon sunshine, catching up with what everyone did over the summer. Bob and Sue are from Prince George in northern BC and attended the ATV/BC functions that we normally do...but couldn't this year because we were working. We really missed the events! 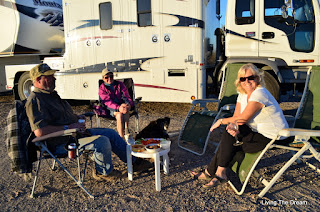 By 6:00 the sun had gone down and it was cooling down...time to call it an evening. Great chatting and catching up with you Bob and Sue!

Posted by Dianne and Steve at 6:51 PM