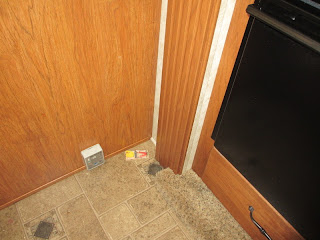 Saturday again...wow, these weeks are going by so fast!  We’ve been here for 3 weeks already!  We’ve had a mouse trap set up in a corner of the kitchen where the slider comes in since we arrived here.  There have been no signs that we have an unwanted visitor (no droppings left behind) but since Steve saw one fleetingly when we were stopped at Camping World in Burlington on our way north, we have kept a trap out.  Well...this morning there was one in the trap.  The funny thing is that I stood right beside it pour our morning coffee and didn’t even notice it...ewwwww........!  I guess the little critters manage to get in any little nook and cranny they can find so we will just be leaving that trap set up in that corner...to catch them as and when they decide to come for a visit.


We are meeting some cousins and close family friends for lunch today at the Cactus Club in Coquitlam today.   Glenna doesn’t know it, but since a milestone birthday is coming up for her in a couple of weeks, we are also using this get together as a surprise celebration.  We left shortly after 11:00 so that we would have plenty of time to stop and pick up the cake and flowers before meeting everyone at 12:30.  Well that darned traffic...coupled with all of the road construction going on made our drive very frustrating...but we actually managed to make it exactly on time.  So much for wanting to be there early so that I could get the cake and flowers into the restaurant before Glenna arrived...she and Cameron (her son) pulled in the same time as we did!  Oh well...surprise! 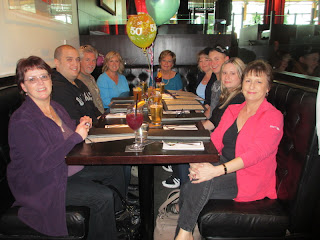 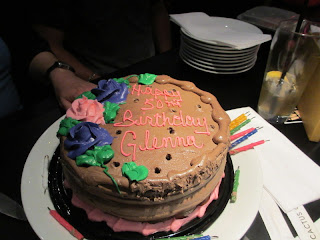 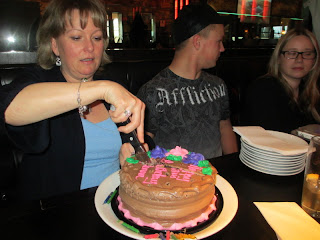 Considering I had made reservations, we were very disappointed with the table we were given...a booth in a dark back corner next to the washrooms....oh well!  Nonetheless, we had a good time and it was great seeing everyone...it was close to 3:00 by the time we were outside saying our goodbyes.
Sunday we decided to go for a long bike ride to Edgewater Regional Park.  It was supposed to be a mainly sunny day today but it ended up being cloudy for the most part...it was warm though.  Once we got home, we had a light lunch and then I baked some cookies while Steve sat outside reading.  I joined him outside in the “semi-sun” for a while before getting ready to head over to The Fort Pub.  We are going there to watch the Canucks/LA Kings hockey game.  Unfortunately, it wasn’t a good night for the Canucks...they lost in overtime and are now out of the playoffs. 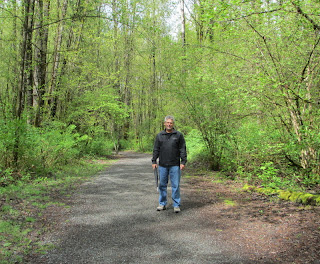 After a lazy start to the day Monday, we headed out for a powerwalk down the trail here in the park to Tavistock Point.  We had a good 45 minute walk...with the first drops of rain starting about 5 minutes before we got back.  It sprinkled a bit but it really didn’t amount to much.
After lunch Steve was off to ITB to have them buff the paint touch-up that they had to do when they changed the boat loader rear mounts.  He was gone most of the afternoon.  I puttered around for a bit and then sat outside reading.  It wasn’t sunny but at least it was warm.
Tuesday we woke to the sound of rain on the roof...yup, I guess they were right.  Rain is forecast for today and it is supposed to get even heavier tomorrow....and rain, it did!  All day!  We hung out inside all day reading and watching TV.  Well into the afternoon it became evident that the rain wasn’t going to stop and if I wanted to get out for a powerwalk, I would have to suck it up and head out in the rain with my umbrella.  So I did.  Needless to say, I was soaked by the time I returned 45 minutes later.
Wednesday was a repeat of Tuesday....day 2 of rain. But as I did yesterday, I went for a nice long powerwalk...and like yesterday, got soaked.  Although an umbrella is helpful, it doesn’t stop your arms and legs from getting drenched!
And...Thursday was a repeat of the rain...day 3...is it ever going to end?  We are looking forward to going over to Victoria Saturday...it doesn’t rain as much over there and I hear they have sunshine!
Friday was a work day...thank goodness the rain had subsided because Steve’s work was outside packing things into the truck.  He had to find room for all of the stuff that we normally keep in the trailer but will need to take with us over to the Island.  I cleaned inside and started packing our suitcases. 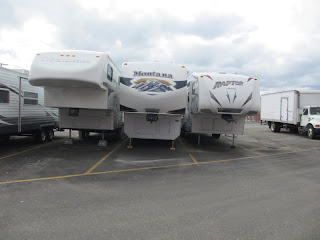 Saturday morning we were up and at it early but it was still close to 10:00 by the time we pulled out of Fort Camping and headed to Econo Storage where we were putting our fifth-wheel into storage.  The spot we had to maneuver into is 10 feet wide and is between two other RV’s.  Since we are 8 feet wide, it didn’t leave much room but Steve managed it with no problems.  After we disconnected, Steve drove the truck around to the back of the trailer so that we could move the bike rack from the trailer over to the truck.  It was 11:00 by the time we were all finished and on our way to the ferry.  I don’t know what I was thinking when I thought that we might make the 11:00 ferry...it would be the 1:00. 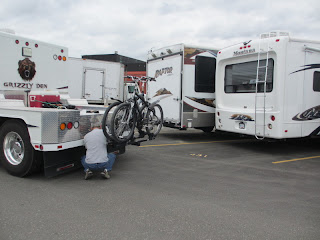 We plan on being on Vancouver Island for the next 5 to 6 weeks....likely heading back to Fort Langley sometime during the first week of June.  So, stay tuned until then...when we resume our adventures!
Posted by Dianne and Steve