Today it was the 5th wheel’s turn to have 2 cameras installed so we were up and on our way by 7:15. We were a little anxious about towing through all the traffic, but we managed fine and had all 63 feet of us parked along the road beside Whyte Communications before 8:00. We ended up being quite a spectacle parked there with the slides out and hazard markers on the road...forgot to take a picture of that. Steve discussed placement of the cameras with Brock and then went next door to Innovative Satellite & Home Theatre. A couple of techs came out and had a look inside the trailer and determined that getting the extra line of cable in that was required for the HDPVR was not going to be easy. They were going to talk to the fellows at Whyte Communications to see if they would be removing any panels inside for the work they were doing and if so, perhaps they would be able to pull an extra cable through. We left it with them to figure out and gave them our cell number to reach us. We were going out for breakfast then back to the mall. Steve wasn’t too thrilled about going back to the mall, but I wanted to get my hair done and he just needed something to do while the work was being done on the trailer and truck.

Brock was good enough to drive us to Dennys , saying that it was just a hop, skip and a jump over to the mall. After breakfast, we determined that the ‘hop, skip and a jump’ was more reflective of a car ride rather than walking (especially since there were no sidewalks in some places), but that was okay, we needed the exercise. On our walk, Steve received a couple of calls from the Tech, Jan, about the cables and they finally figured out how it could be done. Unfortunately, it required access to the garage and Steve had the keys with him so someone would come pick him up.

I think the prospect of going back to watch the work being done on the trailer (both the install of the cameras as well as the satellite system) was much more appealing to Steve than going to the mall. So I continued to the mall, leaving Steve waiting on the sidewalk for his ride. What I found out later is that he waited for over 45 minutes. I guess our directions as to where he was waiting were not very good...the fellow was at a different spot and when Steve got tired of waiting, he headed in to find me to use the cell and found him at a different entrance.... hmmmm....that was annoying...

I found a salon that was able to take me immediately, with no appointment. I am always leery of going to a new stylist and being a ‘walk in’ as well didn’t give me a lot of confidence but I was desperate. As it turned out, Hanna did a good job and I am quite happy with the results. After some ‘alone time’ in the salon, I raced around the mall shopping for a pair of shorts. The ‘end of summer’ sales are on with some great deals and I was successful. They hadn’t expected the work today to take too long so I thought I had better get back. A very nice lady working at one of the mall entrances stores called me a cab...I didn’t really want to walk all the way back by myself. Besides, I had just had my hair done...I didn’t want to get all hot and sweaty!

As it turned out, work was not progressing as quickly as expected...I could have stayed at the mall longer...darn! Installation of the satellite system was much more involved than we had expected but soon Steve was in the store selecting the package of networks he wanted to receive and of course, paying for the whole thing. By the way, we went with ShawDirect. Next thing, he was out with Jan getting directions on how to locate the satellite. It would have been much easier to have gotten the dish that is mounted on the trailer roof and automatically locates and locks into the satellite. But that type of installation requires a clear view to the southern sky wherever you are meaning we would have to find campsites that would accommodate this. We chose the dish on a tripod that has to be manually set up but this way we are able to move it around for the best exposure to the sky without worrying about the campsite we choose. Unfortunately, it also meant we would need to find room inside the trailer for it when we were on the road. 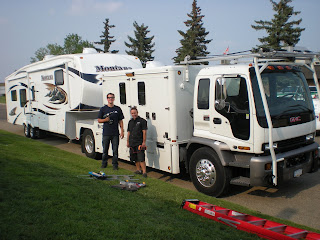 Well, it was another long day for Al and Brock working on the cameras. Once the trailer ones were installed, they had to connect all the wires to the monitor inside the cab of the truck which meant removing the boat loader and tilting the cab. Then they had to ensure all were working correctly. It was well after 6 p.m. by the time they were done...and with handshakes and thank yous, we were on our way back to the campground. That is when Steve decided to turn on the air-conditioning...and guess what?...no cold air...not even cool! Oh great...did the fellows mess up the wiring to the air-conditioning unit when they were doing the cameras?? It seemed too much of a coincidence not to assume so. Well, I guess we’ll be making yet another trip back to Whyte Communications tomorrow.
By the time we got back home, it was late and we still had to get hooked back up to the sewer, power and water...and get the inside rearranged, so we ended up just having a sandwich for dinner.  And as with any kid with a new toy, Steve decided to give hooking up the satellite dish a try. Getting locked onto a satellite was going to be a challenge but they say that once you get the hang of it, it does get easier. Would you believe that Steve got it the very first try?!! Well, that’s a good start...beginners luck, I would say.  We watched a little TV (well, more like surfed the channel guide to find what was on the over 200 stations we now have) then heading to bed. We had planned on cleaning everything up tomorrow...Steve the outside, me the inside plus laundry but it didn’t look like that was going to happen.
Posted by Dianne and Steve