I didn’t have a very restful night...it had been hot and I was conscience of people leaving the parking lot after an event that had been on in the community centre. There was actually quite a distance between us and the cars but I could still hear them. After a quick breakfast, we were on the road again, taking Highway 40 towards Prince Albert. Serena (aka our GPS) would have preferred we continue on Hwy 16 to Saskatoon and then head north, but we decided to ignore her advice.

We needed to pick up a couple of things...the most important thing being BUG REPELLANT...so we punched a Walmart location into Serena and she took us on a very roundabout way to the main drag where there were numerous strip malls with all the big chain stores. We decided on Sobeys where we picked up 2 cans of Muskol bug spray and a few other grocery items.

Then we were back on the road again, this time heading north on highway 2 towards Prince Albert National Park and Lake Waskesiu. Rather than continuing on the Hwy 2 to the main turnoff to the park, we decided to take the so called scenic route going to the south entrance. Bad move...basically scenic meant a narrow, bumpy road... 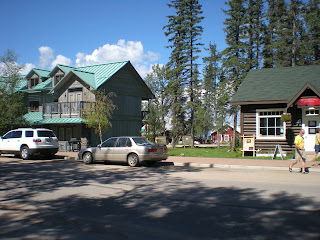 When we arrived at the Park Entrance, we decided to purchase an annual pass to all National Parks—since this was our second one, there is a good chance that we will be visiting more as we travel across Canada over the next few months. We enquired as to the availability of campsites and were told that there was a waiting list. She suggested we go to the overflow and then go register with the campground afterwards...so away we went. The “scenic” route took us right through the town of Waskiesu...it is right on the lake with a huge beach. It appears to be a very popular summer vacation spot. There are lots of small summer rental cottages...it reminded me of the little bungalows my family used to rent in the summer at a lake outside of Edmonton—brought back a few long lost memories of my childhood.
We made our way to the overflow campground which was typical—a big grassy field. There were about 5 or 6 other units there when we arrived. We pulled up beside a trailer with a family from Saskatoon—Gary Baba, his wife and 3 young daughters. What struck us very interesting was his last name...”Baba”. He said it wasn’t short for anything...had always been Baba. Of course, we told him what our last name was...very curious...
After getting all set up, we went and registered with the campground...we were #20 on the wait list. After they went through all the fellow campers in front of us, we ended up being #7 on the wait list for tomorrow...come back at 11:00 a.m. to see if you get a site.

Next on the agenda was laundry...we were running a little low on undies! One thing I don’t mind about going to Laundromats is that you can usually do all your laundry at once and get it all over with. Mind you it’s not all that much fun sitting around waiting for it as it does its thing in the washer....then dryer...and then there’s the folding...but hey...all in a days “work”! After that was done, Steve made a quick trip into the liquor store next door (gee...a government liquor store open on Sundays) and we headed back ‘home’. 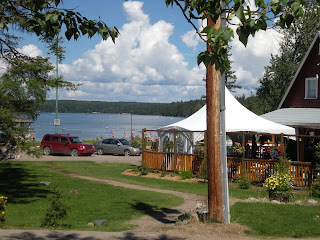 As I was putting the laundry away, I started hearing some rumbling off in the distance...ah ha...I knew that a good thunder and lightning storm was starting to brew out there! We had seen the clouds forming as we headed north.
Okay...it’s happy hour now...time to sit out in the lawn chairs at our new location. I no sooner had sat down and Holy Cats! I was attacked by a swarm of mosquitoes...and get this...from under the mesh chair. Yup...right up the back of my shorts to the very top of my thighs...bordering my butt! I am most definitely allergic to these prairie varieties...I had huge swollen welts! What a pretty picture Steve had when he came in to apply some “After Bite” on my backside as I lay sprawled on the bed face down! That was so uncomfortable! The itch and the discomfort eventually subsided but I was spending the evening inside...thank you very much!
A little later in the evening, the thunder and lightning storm came into full swing bringing a major downpour. I don’t think that I have ever seen it rain so hard! At least not for a long time. It started just after Steve had gone outside to get his new generator out. Of course, it had never been run before and still needed to be primed with oil and filled with gas. Although he tried to do the majority of the work under the overhang of the 5th wheel, by the time he got it all hooked up, he was absolutely soaked! Oh the price we pay to watch programs on the big screen TV!
It was just about 10:00 p.m. when we figured we should be polite neighbours and turn the generator off and go to bed. Shortly after turning the lights out, I noticed there was some major flashes going on outside. Sure enough, the thunder and lightning storm had returned...this time with a vengeance! The lightning was absolutely spectacular as we watched it from our living room windows and the booming thunder that followed was deafening! What a great show!
Posted by Dianne and Steve at 9:18 PM