We had a slow start to the day after being up and out so early the past 2 mornings. It was going to be another hot day...but also very hazy. It seems that the smoke from forest fires in BC has been drifting this way.

Steve called Brock and explained the situation with the air-conditioning and made arrangements to bring the truck back in later in the morning. It was about 10:00 a.m. as we were leaving and decided to stop at the office to pay for another night. We had been in the day before yesterday and talked to the girl saying that we would definitely be staying that night (Thursday) and quite likely Friday but we weren’t sure. She said no problem and that we could just pay one night at a time. Well, let me tell you...was I surprised when she said that our site was already booked for someone else that night and that we would have to move! The wrath of Dianne did not faze her in the least, so I stormed out to tell Steve. Well, he was equally mad and went in to talk to them....I remained in the truck. The wrath of Steve worked and we were paid up for another night without having to move...whew!

Once back at Whyte Communications, Al immediately checked all the wiring he did as well as the fuses and everything seemed okay. Next step was to unbolt and lower the boat loader so that the truck cab could be tilted. Al checked all wiring there and could not find anything wrong with what he had done that would affect the air-conditioning. Hmmmm....that meant that we would have to find a GM dealer that services our type of truck...and of course, it was a Friday afternoon. Well, no luck with that but I must say that Al went above and beyond in his efforts of trying to help us. He wants Steve to let him know what the problem ends up being...particularly if it was something he may have done. We have decided to carry-on with our plan to leave tomorrow—we will get the air-conditioner fixed somewhere down the road...probably Winnipeg. Travelling across Alberta, Saskatchewan and Manitoba in August with no air-conditioning...YIKES!

On another note, it turns out that needing to take the truck back to Whyte Communications was a good thing because while driving the truck without the 5th wheel, Steve discovered that the backup camera was not working. We had a backup camera installed on both the truck and the trailer and since we did not have the trailer this morning, the monitor was “looking for” the trailer camera and of course, it wasn’t there. Al called the supplier of the cameras to discuss our setup and the end result was a toggle switch was required...to switch between when we were pulling the trailer and when we weren’t.

We ended up spending the better part of another day getting the truck fixed up. It was about 2 p.m. when we were heading home. Since we were leaving the next morning, Uncle Gord and Esther were going to pop out later in the afternoon for a drink and to see us one last time. I had called him earlier to let him know of our situation and now to let him know we were finished and on our way home. They would be out around 3:30...perfect! 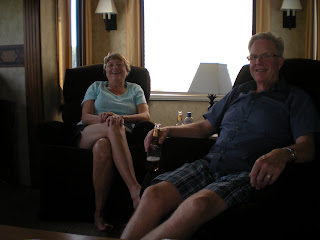 Uncle Gord and Esther arrived just before 4 p.m. and although it was a beautiful day outside, we sat inside with the air-conditioning on (at least the 5th wheel still has air-conditioning) because the mosquitoes are really bad, particularly since we are in a huge grassy area. We visited with them until about 5:30 when they left to pick up the boys (Yolanda’s kids) as they were off to a football game tonight. It was wonderful seeing Uncle Gord and Esther and the family...we had such a great visit with them! Thanks so much for your hospitality!

We’ll be on the road again tomorrow...we’re looking forward to it.
Posted by Dianne and Steve