We were on the road by 8:00 a.m. this morning. It was another gorgeous day...but hazy again. We stopped at the Flying J Travel Plaza that was on the eastern edge of Edmonton. We fuelled up with diesel but we also wanted propane...they sold it there but there would not be anyone qualified to pump it until 2 p.m. that afternoon...sheesh!....so we carried on taking the Yellowhead Highway 16 east.

Esther and Uncle Gord had told us about a little store in Mundare called Stawnichy’s Meat Processing...apparently they have the best homemade Ukrainian sausage. Since Mundare was only 2 km off the highway, we decided to stop. The sausage business was started in 1959 by Mr. Woytko Stawnichy in Mundare, Alberta in a small grocery/confectionery store with one small sausage smoker. It has grown over the years into Mundare Sausage House with the processing plant in Mundare and Uncle Ed’s Restaurant in Edmonton. The restaurant seats 50 and also contains a deli carrying many imported Polish and Ukrainian goods to complement the traditionally delicious, award winning Stawnichy meat products. We were able to sample a lot of their product and left the store with 2 bags containing everything from Kubassa, to European Wieners to homemade Ukrainian sausage patties and even perogies....yum! They were all out of the bratwurst and buffalo burgers...but we did get some of Aunt Jane’s homemade beef patties.

After leaving the store, we decided to stop at the rest area by the main entrance to the town and have our lunch. This is where there is a giant 42’ Sausage Replica as well as a Buffalo Replica...interesting.... 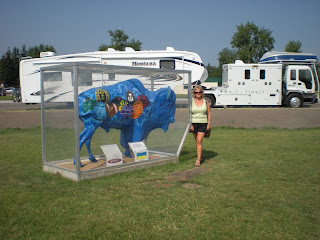 We managed to fill one of the propane tanks at the local station in Mundane before we headed back to the main highway. 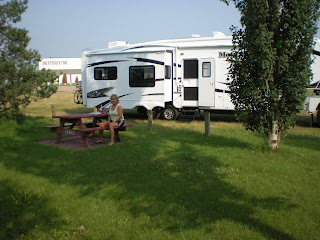 After driving as far as North Battleford , we called it a day...Steve was beat, it had been a long drive. We were actually looking for the Walmart parking lot when we came across the North Battleford Chamber of Commerce Visitor’s Centre that had a big Rotary Club picnic area backing onto a museum and community centre parking lot. We asked the fellow in the visitor’s centre if it would be okay to overnight there and he said sure...yay...much nicer than a parking lot! We pulled in and were level so all we had to do was bring down the stabilizers...no unhooking required...bonus! 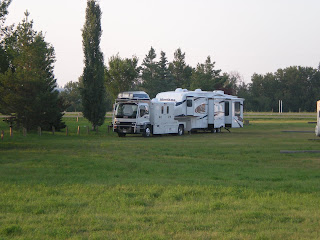 I think the prairies have very different mosquitoes than we do on the Island...or maybe it’s just that there are way more of them...but when they bite me, I get huge welts! They got the back of my legs good but a breeze came up a little later allowing me to sit outside at the picnic table without be bothered too much. Steve barbequed up a couple of the patties from Stawnichy’s for dinner and then we headed to bed early. We’d be on the road again early in the morning heading to Prince Albert and Prince Albert National Park.
Posted by Dianne and Steve