We had a relaxing start to the day Friday...and then it was time to get to work. Steve headed outside to finish setting up our "yard"...putting the mat down, solar lights, etc. While he was doing that, I showered and cleaned up inside.

After those chores were done, we walked down to see Art and Jan and give them a proper hello. We chatted for quite a while and then wandered back home so Steve could off-load the quads from the truck. The new tires for both quads were due to arrive in Blythe today and Art had offered to use the hoist on his truck to raise the quads up to remove the wheels. We got 7 1/2 years out of these ITP Mud Lites. 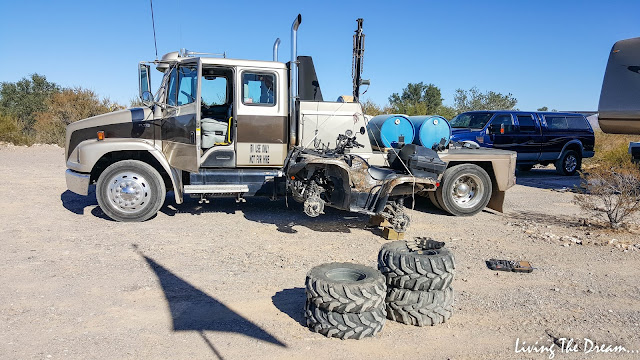 Saturday morning we were up and on the road before 7:00...and without my morning coffee! Yikes! But we wanted to be at Alex's Tire in Blythe by 7:30 as they suggested so they could get our 8 quad tires changed...they are only open until noon on Saturdays. We arrived at 7:34...and no one was there! The hours posted on the door say they open at 7:00...is this anyway to run a business? We waited and waited...and finally someone showed up at 8:00.  Steve off-loaded the quad wheels and then we headed to Denny's for breakfast...and coffee!

That's where Steve noticed a clock just before leaving that said it was just before 8:00...huh? Oh right! Blythe (which is only about 23 miles from Q) is in California...which is an hour behind Arizona! Duh...we totally forgot about the time change!! Sorry Alex's Tire for all our bad thoughts for not showing up at work until 8:00...you were actually on time.

So much for our perfect timing...we figured by the time we dropped the wheels off, had breakfast, we would be just in time for the local Verizon store which opens at 9:00. Now we had an extra hour to kill...it wasn't hard though. We went to Smart and Final for some groceries...and for the first time, Steve said "take your time" LOL!

The reason for our Verizon visit was to get a SIM card for a phone that Deb and Ray had given us (yes, they gave us 2 phones that they no longer used....wow! Thanks guys!). I mentioned in a previous post that we decided to go with Roam Mobility as our cell provider in the USA this season. All we had to do was buy a SIM card before we left Canada, set up an account on-line and then when we crossed the border, put the card into our Canadian phone and we'd be good to go. So before we left, we picked up a card and set up an account...they have a Snowbird Special, described as Longer-term plans tailored for snowbirds and other travellers that spend long periods of time in the USA. Available for a minimum of 3 months...so for $49.95/month you get unlimited talk, text and data (some restrictions). We figured the data on the cell would suffice until we were able to get our Verizon JetPack activated. So we gave it a try. Well, talk about disappointing! I'm sure it works fine in large populated areas but as you know, we visited a lot of "out of the way" spots on our trek south. Consequently, there were very few spots where we actually got service. Of course, no service meant not only no talk and text, but no data either! What I found even more aggravating was when you could tell there was service in the area but Roam Mobility didn't recognize it! Since we had to take it for a minimum of 3 months, we suffered with it but today (January 6) was the end of the term...no, I'm not "topping it up"! Thus our visit to the Verizon.

Well, our visit to the store took somewhat longer than expected...like 2 hours! The strange thing is we had 2 identical Samsung Galaxy 6 phones, but the one we had been using will not accept the Verizon SIM card, we had to use the one that had a Verizon label. Anyway we ended up on the telephone with tech support trying to figure out why the Verizon phone would not recognize the new phone number. Desi, our rep at the store was fabulous. She ended up having to do a complete factory reset of the phone...but it did the trick! Thank goodness! And by adding an additional line to our account, it only costs us an extra $20/month...and that's for two devices on their "Beyond Unlimited" plan. All I can say is that I am glad that I did not just buy the SIM card and take it home to activate myself...like I had originally planned. It was well worth the $30 activation fee charged by the Verizon GoWireless Store.

Part way into our time trying to get the phone to work, Steve went next door to see how our quad tires were coming. They were done...so with them all loaded back into the truck, he had to wait patiently with me!

Finally on our way back to Quartzsite, we stopped at The Flag Shop to buy a couple of new whip flags for our quads (for those who frequent the shop annually, they have moved to a new location next to McDonald's on Main Street).

We stopped at Art and Jan's and dropped the quad wheels off and Steve, with Art's help, got to work on remounting the wheels...and I walked home. 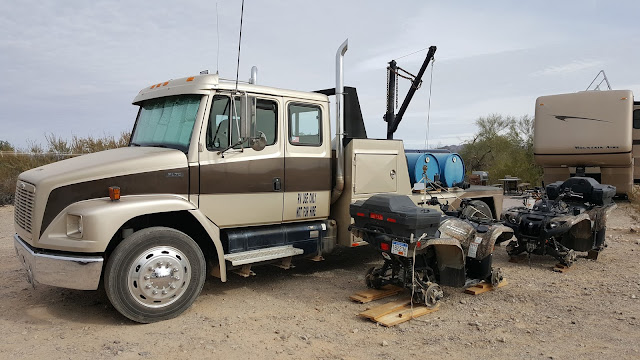 New Maxxis Bighorn 2.0 tires, hopefully they last as long as our old ones did. Art and Earl both have these tires so they must be good. Thanks for all your help Art! 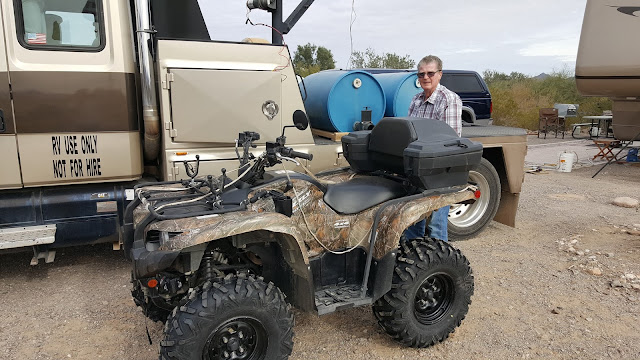 At 4:00 we loaded the quads with our bevies and an appetizer and headed off to find Ruth and Dale's spot...the first happy hour of our Quartzsite season! 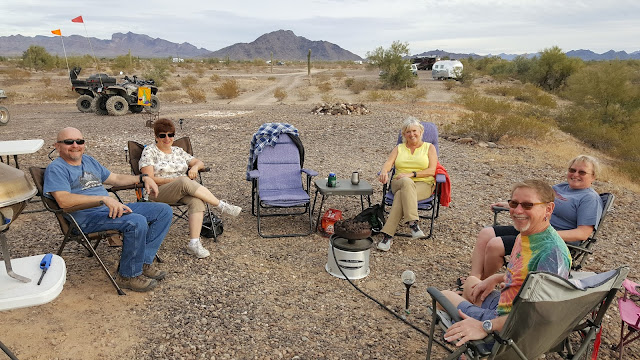 We had a wonderful few hours catching up! Les and Sue are here for the rest of the season but Ruth and Dale are leaving next Sunday (returning late February). Ruth relies on good internet as she is working and over the next month speeds will drop with the influx of RVers arriving for the big Quartzsite Sports, Vacation and RV Show (January 20 - 28), so they move to a more populated area...Tucson, I think. Dale is also a very talented jewellery maker and may have more art shows to attend. Check out their website...Fusion Silver.