Monday morning, we walked up to use the park's payphone again. Steve wanted to call Gold Key Isuzu in Langley to confirm our appointment tomorrow morning. I found out that my card wouldn't work the payphone yesterday had something to do with the phone and not me...I managed to get through to an operator who put the call through.

With the appointment confirmed, we walked back to our site and prepared to take the truck down to the boat launch and off-load the boat. It was a beautiful sunny morning...and it looked like we would have a sunny drive down to the coast this afternoon.

Once that was done, we went back to pack a suitcase and get ready to head off. Sue popped by and we gave her a key to our trailer and told her our plan was to be back Wednesday. They'll keep an eye on things...thanks, guys!

It was 11:45 when we pulled out and headed back down Tunkwa Lake Road to the highway. This time, we turned east, taking highway 97D through Logan Lake to the Coquihalla Highway.
Approaching the beautiful Nicola Valley... 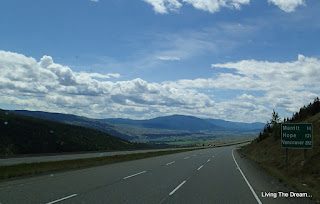 Just past the turnoff to Merritt, we came across an accident. Actually, about 4 kms before it, there were "accident scene" signs posted along the highway warning about the accident. As we drove by we saw a completely mangled car that looked like it had run into the back of a flat-deck truck...a horrific crash that I'm sure had resulted in at least one death. The Firemen were holding a tarp up to prevent us passerby's a view of the carnage. Tragic... 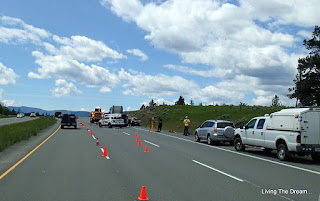 It was a gorgeous travel day...so nice to have sunshine back again! 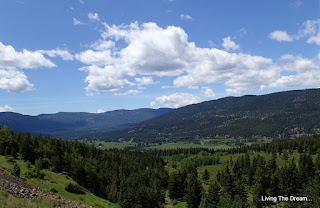 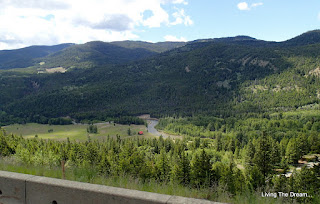 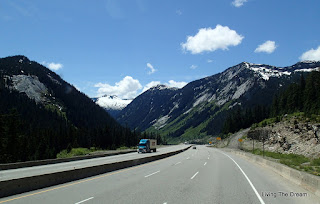 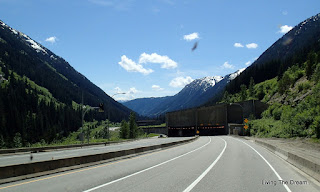 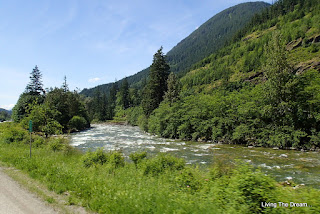 We arrived at Chris and Angela's place shortly after 4:00...just a few minutes before Angela got home. Chris got home around 5:30. We had a nice visit and then Angela cooked tacos for dinner. We were relaxing in front of the TV when Angela decided to go for a walk...so I joined her, leaving the guys to watch their music video.

Here is Dexter relaxing on his window ledge...see Buster? He fits in the driveway below... 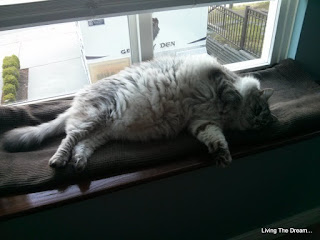 Monday morning, Steve was up and out by 7:00...on his way to Gold Key Isuzu. I had a more relaxing start enjoying coffee and chatting with Chris and Angela as they got ready for their work day.

At about 8:00 we all headed off...Angela in her car to work, and Chris and I in his car. After dropping him off at work, I drove out to Langley to meet Steve at Gold Key Isuzu. I guess he had just returned from driving the truck with the mechanic for an hour trying to get the 'new' noise to show it's ugly face.

After a cup of coffee, we started our day of shopping (and looking)...not much else we can do while we wait for the truck! At the end of the day, I had yarn for some crochet projects...and a new FitBit (a new gadget for "gadget girl"! LOL). Steve had a new pair of 'Keen' shoes along with new inner-soles for his old shoes (to use as his backup pair...or "grubby" shoes). We had made a lot of stops, had lunch at a "Mr. Mike's" restaurant (hadn't been in one of those since the good ol' days!), wandered around Woodgrove Mall...and it sure was nice "zipping around" in Chris' little Mazda 3!

I dropped Steve off at Gold Key just before 3:00 and left him talking to Dave while I headed back to Coquitlam. The truck was almost ready. Apparently the bolts that hold the new EGR Cooler to the new exhaust manifold installed at the dealer in Phoenix last January had worked their way loose allowing the gasket to leak. This is not the first time this has happened and they are totally stymied as to why. They decided to do a spot weld beside each bolt to prevent them from backing out. Considering this is about our 14th visit dealing with this issue between two different dealers Steve isn't confident that this is finally over with.

I made a quick stop at Super Store to pick up a few things to take back with us and then a few minutes after I got back to Chris and Angela's place, Steve also pulled in. We organized the inside of the truck cab, put a few things away and then I logged into FitBit.com and started setting up my new "toy". We only had about a half hour before it was time to take off into Burnaby to pick up Chris. Angela was working late (orientation for new kindergarten students coming in next fall), so the three of us went to John B Neighbourhood Pub for dinner... 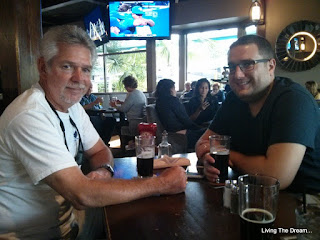 Back home, I spent the rest of the evening getting caught up on our blog. Tomorrow we head back up to Tnkwa Lake...looking forward to getting on with our adventures there! Steve wants to get out fishing and I want to get out walking and riding my bike!