We pulled out of our site at Fort Camping at 9:30...it was cloudy but at least it hadn't rained while Steve was finishing his pack-up outside. 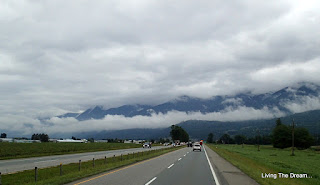 We hit highway 1 east to Hope and then continued on the Coquihalla, Highway 5 north. We had pockets of rain, intermingled with breaks of sun, but mostly it was cloudy. Not the nicest travel day, but it was good to be back on the road.

The Fraser River, as we drive east towards Hope... 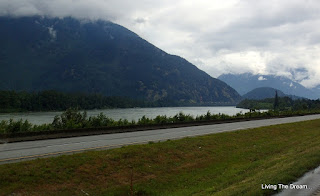 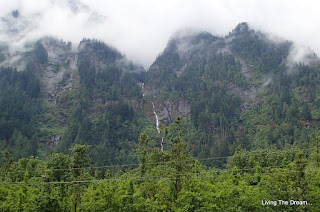 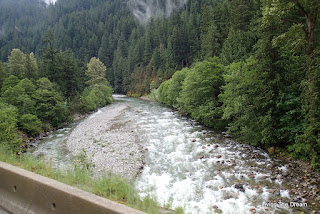 Fog coming up from the valley below... 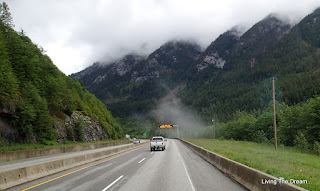 It wasn't long into our drive when we started to hear the familiar "squeal" from the truck...we knew it hadn't been fixed but were going to have to bear with it for the summer until we returned in September. What happened as we started climbing into the mountains along the Coquihalla highway is something we hadn't expected...a new sound, this time as we accelerated, which had never happened before. A loud whistling sound...Steve likened it to an jet airliner taxiing along to a runway. That...and the familiar downhill squeal...was the worse it has ever been! Great! We certainly can't "live" with that all summer...we were even worried that this may be a new and different issue and would we make it to Tunkwa.

At Merritt, we took highway 97C north towards Logan Lake. 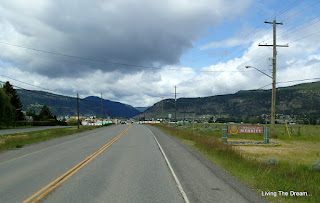 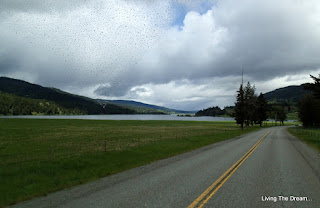 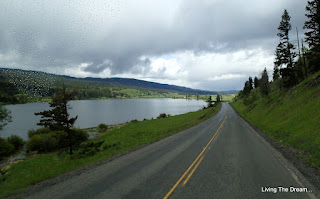 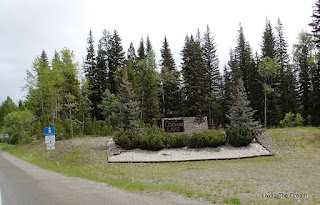 We stopped at the sani-station just on the outskirts of Logan Lake to fill our fresh water tank. After going through rain, the sun was actually shining...but that was short-lived! Dark clouds let loose...first there was a downpour of rain, followed by hail. The hail came as we were filling the 5-gallon containers. Steve was putting them back into the truck while I took care of the hose...I managed to get it all wrapped up and put away but in my mad dash to get out of the hail storm, I left the brand new water filter on the tap...Steve discovered it missing later on. Sheesh! Wouldn't be so bad if it hadn't been the very first time we used it!

Before leaving Logan Lake...and cell service, Steve called the Service Manager, Dave, at Gold Key Isuzu. Dave wasn't there but Steve left a message telling him the truck is the worst it has ever been and that we will be bringing it back on Tuesday. So I guess we will be driving back down to the coast Monday afternoon to drop the truck off first thing Tuesday morning.

Lots of "wild" life on the road to Tunkwa Lake... 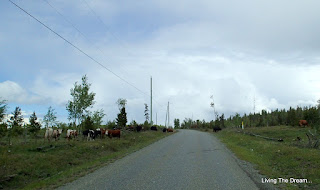 There were ball caps on all of the fence posts along this stretch...curious...don't know why, someone's sense of humour, I guess? 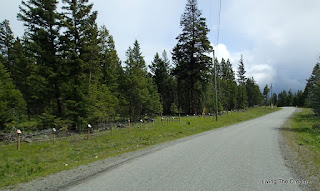 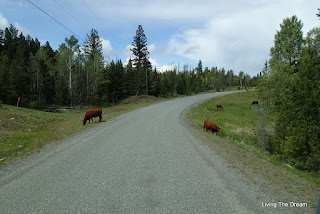 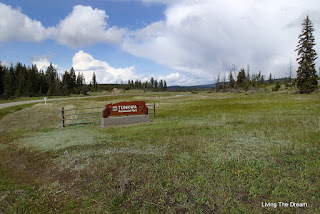 We arrived shortly before 2:00 at Tunkwa Lake Provincial Park where we were greeted by Doug and Sue. We pulled over to the side of the road, and after big hugs, Steve went off with Doug to check out the long term sites, leaving Sue and I to chat for a few minutes. I guess there are just a few of the long term sites available, none of which are near the lakefront. This is one of the few provincial parks that actually have long term sites...most have a maximum 14 day stay.

Doug showed Steve the available sites...only 3 left...so we headed off to get set up. The one we picked (site 50) is at the end of the road so there are no neighbours on that side, has a great view and the outhouses are on the other side. That will be handy since we plan on being here at least a month and there are no hook-ups, so we will be conserving our black water tank and using the pit toilets through the day.

It was going on 4:30 by the time we were completely set up. We had some difficulty snagging a satellite signal but after moving the dish a little further away from the trailer, we finally got it. That took longer than usual, but we have TV now...so all is good. 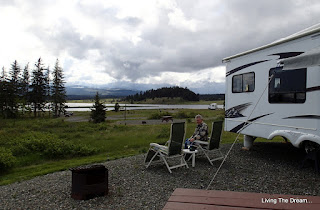 There were some dark ominous looking clouds hanging around but for the most part, they seemed to skirt around us...well, except for the occasional rain squall. We did managed to sit outside and toast our new location with a bevie...but that, too, was short-lived and it wasn't long before we retreated inside to warm up. 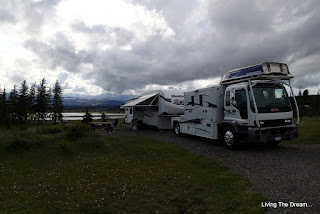 That is where the next thing in a day where nothing seems to be "going right" happened. Steve tried and tried to get the propane heater to light. Remember? The new one we just bought in Quartzsite last winter. He managed to get the pilot lit but when he turned up the gas, it went out. Great! We're going to freeze up here at this elevation (3700 feet) so early in the season! With neither one of us in a particularly good mood given the events of today...this just seemed to be "the icing on the cake". I happened to mention...hmmm, seems like it's plugged...which obviously triggered Steve's memory. He had used some masking tape to cover the end of the regulator because he could smell propane while the heater was being stored. Oops...he had forgotten to remove it. Thankfully that was all it was...and we have heat. Amazing that any propane was getting through at all.

The day ended with a lovely rainbow...a sign that things will get better? 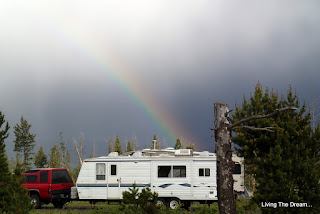