I was awake bright and early again this morning...5:30 is becoming a bit of a habit!  It was still pouring with rain outside...another very dreary day.  Hopefully, it clears up by the time we have to leave tomorrow morning (or at least stops raining!).

Just before 8:00, the service bay door opened.  We were all ready for them, just needed to put the sliders in.  After a good morning chat with our service rep and the technicians, we dodged the puddles to the truck and headed off to find a cafe for breakfast. 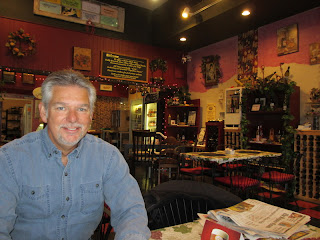 We ended up going to a little bistro on 6th Avenue...actually it was the same place that we went out for lunch last September with Monte, Rose, Gina and DJ. 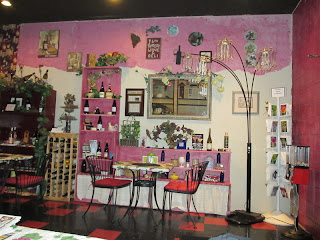 After a very delicious breakfast, we thought we would stop by Countryside Interiors.  We had been there last September and had almost bought 2 new recliners but they only had one left in stock.  We hadn't really expected them to have them in stock this time either since it sounded like they usually do custom orders, not keeping much other than floor models in stock.  We were just killing time and thought we would pop in.  Well, wouldn't you know it...they had 2 chocolate brown leather recliner/swivel chairs in stock (actually they had 3).  So, we decided to "bite the bullet" and go for it!  We will pick them up on our way out of town tomorrow.  And...since our old recliners are under 5 years old, they will take them and sell them on consignment.  She said that dealers often buy them when refurbishing RV's.

We made one more stop before heading back to Guaranty RV.  Steve had noticed Junction City Farm and Garden Supplies yesterday so we thought that we would stop there to see if they have a product called "Fresh Cab"...it apparently deters rodents... in particular, mice, from entering your RV.   Unfortunately, they had never heard of it.  I later googled it and found that it is sold in some hardware stores...we'll definitely have to get some! 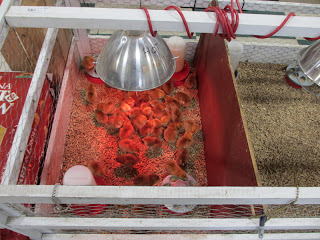 They had these cute recently hatched chicks in a pen at the store entrance...


After a nice long telephone conversation with our financial adviser while sitting in the truck outside of Guaranty RV, we headed into the Customer Lounge to wait...and wait.  The work must be finished by closing tonight.  John, our service rep, did come in and update us a couple of times. 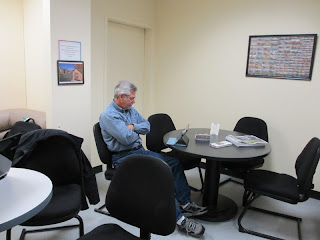 It was going on 4:00 by the time work was completed on our fifth-wheel.  The TV air antenna was now working and they had also connected the outlet in the garage so that we could watch satellite TV while sitting outside.  This is another example of something else we had to pay twice for. On our second month on the road while in Edmonton Alberta we were getting a camera system installed on the truck and trailer. There just happened to be a satellite installation company next door and we needed a dish and receivers. Apparently their expertise was home installations and not RV. They disconnected our air antenna and after their install Steve had to switch cables to different ports depending if we were on cable or satellite. Now he doesn't have to do any of that...it's all done from the TV.  The dining table doesn't wobble anymore and slides much easier...and the lights come on when you open the door...no more fumbling to find the light switch in the dark! This was a factory defect (wired incorrectly) that we always seemed to overlook while we still had the factory warranty.  One issue that began recently while putting on the miles was that two of our sliders started to creep out about an inch or two while driving longer than 6 hours. They diagnosed a faulty check valve in the hydraulic pump but unfortunately had no stock. Perhaps if they would have started work on our rig by 9:00 a.m. yesterday morning instead of 2:30 p.m. they could of had one shipped in overnight?! They also didn't have product in stock to replace the damaged outer seals on the sliders...something we thought very odd since you'd think it would be something they would have lots of.

Once back in the camping area across the street, Steve wanted to try out the satellite to ensure it still worked properly with all of the work they had done on the wiring.  He got the dish all set up and I was inside getting the TV on to monitor the signal when it dawned on me that I had suspended our service a couple of days ago...sheesh!  That was a complete waste of time.

We spent the evening watching TV and then called it a night.  We have a long drive tomorrow.

Posted by Dianne and Steve at 7:23 AM