I woke up this morning just as the pitter-patter began on the roof...it was 4:40 a.m.  Okay...I wanted to get up extra early today so I could still have my coffee time (I don't like having to rush in the mornings anymore!)...but this was just a tad bit too early.  So I laid in bed until about 5:15 and then decided that I might as well get up and put the coffee on.

Steve joined me about a half hour later and we enjoyed our morning coffee...as we listened to the rain, Steve with the iPad and me with the laptop.

At about 7:30 Steve decided to brave the weather and headed outside to put away the electrical cord and then walk across to the service department to check-in.  While he was gone, I finished up inside.

Shortly after 8:30 John, our service rep, came over to go over everything we wanted done and write it up for the technicians.  He was all finished about a half hour later and we were good to go.  But before heading out on our shopping trip, we thought we would wait and pack up the blocks once they had taken the fifth-wheel over to the service bays.  Well, we waited (and waited) sitting inside the truck out of the rain until we finally gave up at 10:45 and left.

Our first stop was at a Yamaha dealer in Springfield where we wanted to look at new helmets.  Ours are getting quite old and although they have never been damaged, they still need to be replaced.  Unfortunately, that wasn't going to happen today...we were very disappointed in the selection.  I wish they had a store here like the Helmet Center that we were in while in Peoria, AZ.

Our next stop was at Costco where once we had finished picking up the things we were after, we stopped for lunch.  You always gotta stop for lunch when at Costco.  I must admit, though, that I miss the famous Costco hot dogs I used to have all the time...instead I opted for the grilled chicken Caesar salad.  Steve had his usual...combo pizza and soda (pop). Lunch was $7.16...sweet!

Next it was onto Walmart...and then a final stop at Fred Meyer to fill up the truck with diesel.  Using our Kroger's Card, diesel was $4.04/gallon (a 3 cent discount)...the cheapest price that we were able to find in the area.  And Buster was very thirsty since he was almost on empty...we certainly didn't get away from there with a very cheap bill...$356.10!  Oh well...it is what it is! 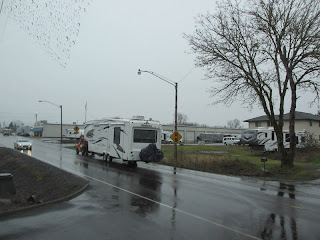 It was going onto 2:30 when we pulled into the camping area at Guaranty RV to find that our fifth-wheel was just about to be towed over to the service bay.  What?!  They hadn't even started the work yet??  Steve was not a happy camper any more and asked to speak to our service rep. The excuse was that they needed to wait until they had an empty bay because they couldn't work on it outside in the rain...sheesh!  This is the pacific northwest where it always rains, plus we booked this appointment just over a week ago. Well they know that we have to be "outta here" early Thursday morning...at least they have 2 techs working on it. 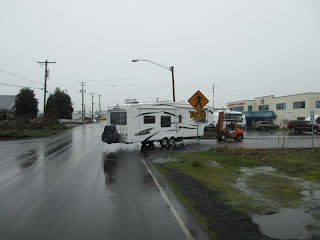 While Steve talked to the service people out in the rain, I headed to the waiting room where I set up the laptop and started working on our blog.  It wasn't long before Steve joined me...and that is where we spent the rest of the afternoon. 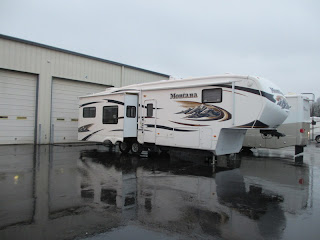 Just before 5:00 John came in to get us...it was closing time and our fifth-wheel was just about to be pulled out of the service bay.  So they plugged us in and this would be our camping spot for tonight.  They will continue work on it bright and early tomorrow morning.


With Buster sitting out on the street... 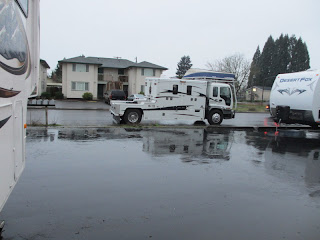 Posted by Dianne and Steve at 6:13 AM