I was up bright and early this morning...6:30...got the coffee on, fired up the laptop and resumed my usual morning spot in my recliner.  I had two blog posts to finalize and get published.  Steve joined me about 15 minutes later.  The sun was shining...the forecast for the air show weekend was looking spectacular.

Today, however, we had some errands to run...but before that, we were going out for breakfast (something we haven’t done for ages).  We loaded the laundry into the truck along with an empty propane tank...and headed off to ABC Country Restaurant for breakfast.

After breakfast, we found a Laundromat and spent the next couple of hours doing laundry.  There happened to be a Lordco nearby, so Steve had some “alone” time walking the isles and checking things out.  He was actually after one fuse...of course, they only came in packs of 5...oh well, he’ll find one somewhere else.

Once the laundry was all done, we stopped to fill the propane tank, then Safeway and liquor store...and then continued onto Fraserway RV.  We wanted to take a look in their parts department.  We wandered around there for a bit, Steve found  a 50 amp circuit breaker he wanted and then we headed home...it was after 2:00 by this time. 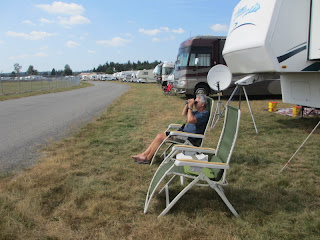 Well, it’s a very noisy campground...all of the airplanes were practicing today!  It was awesome...watching the Snowbirds, CF18s, Spitfires, etc.  Steve was out there with his camera...he is absolutely in his element.  I joined him after I put the laundry away and made the bed.  We spent the rest of the afternoon watching the show.  Unfortunately, a high cloud covering moved in...hopefully there will be clear blue sky for the air show. 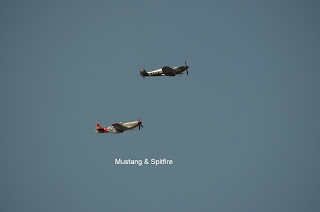 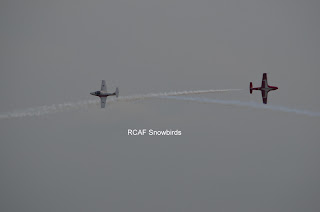 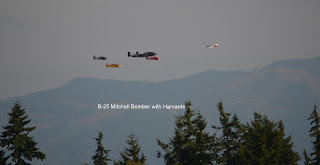 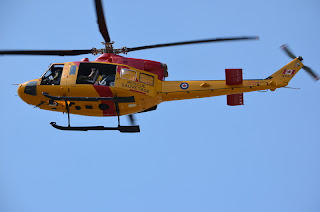 After dinner went thought we should get a little exercise so we put on our runners and went for a walk to the end of the road and back.  The camping area has really filled up today.  We're so glad we arrived yesterday afternoon and got the spot we did.