The forecast for today is sunny with a high of 18C/65F...a perfect day for friends Harry and Vicki to visit! They are in Sequim, Washington for a few days and are taking the Coho Ferry from Port Angeles over to Victoria for the day. We first met them in 2012 at the RV-Dreams Rally in Harrisburg, Oregon...and now see them every winter in Quartzsite.

We were watching as the Coho ferry pulled into the Inner Harbour at 9:50... 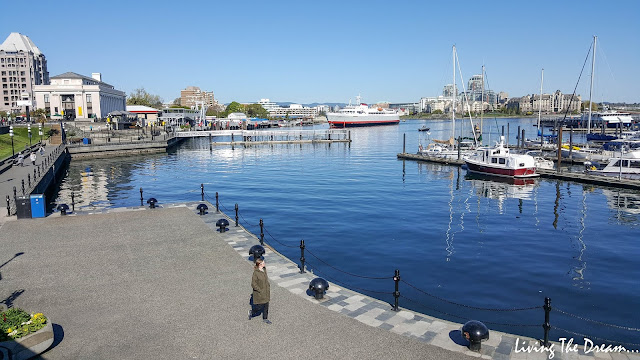 And were waiting as Harry and Vicki came out after clearing Canadian Customs...they let Harry in LOL! 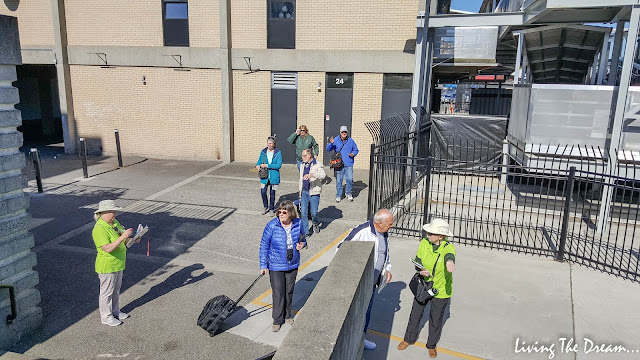 After big hugs....we walked along Belleville Street passing the Parliament Buildings, and then up Government Street. We tried to go inside the Fairmont Empress Hotel but "looky loos" aren't allowed in the guest entrance...hmm....that's new. So we continued up Government Street to Bastion Square...Bastion Square is located in the heart of downtown. The ceremonial entry arch, located at View and Government Streets, welcomes visitors to the original site of old Fort Victoria. The square looks out on the Inner Harbour and boasts some of the finest restaurants, pubs, and cafes in Victoria. In the summer, its seasonal artisan market and many outdoor patios make it an ideal spot to visit.

We walked through Bastion Square, along Wharf Street back to Government Street, eventually reaching our car...we had lucked into a parking spot beside the museum. We were so busy talking we didn't get any photos. Time for a driving tour of the Greater Victoria area.

After driving through Beacon Hill Park, we continued to Clover Point and then along the waterfront past Ogden Point, the cruise ship terminal, then through downtown, eventually making it to Mount Tolmie Park..."The Best Place to View the City"... 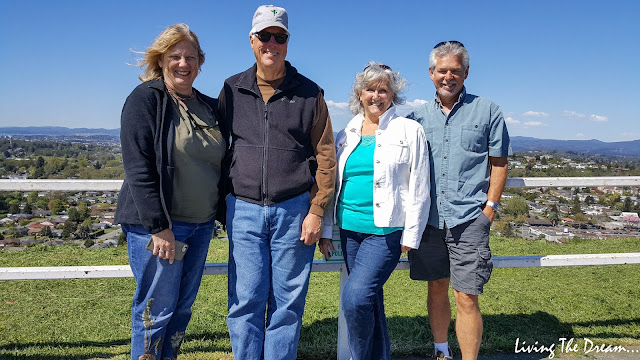 Cropped from Steve's phone. A cruise ship and downtown Victoria... mountains on the Olympic Peninsula in Washington State across the straight...

From there, we decided to drive out to the end of the Saanich Peninsula and show them our son's house (our old house that we built in 1990), the beautiful little town of Sidney, and on the way back, our current home Oceanside RV Resort.

It was 1:30 by the time we were back in Victoria and Spinnakers Gastro Brewpub...enough time to enjoy lunch on the deck overlooking the Victoria harbour. We were seated, ordered our beer choices and when the waiter delivered our drinks, the tray tipped sending 2 pints of beer onto Steve's lap! See how much darker his left short leg looks...he had Chocolate Stout on his shirt, shorts and down one leg all over his left shoe. Harry got a little splash too. After the mess was cleaned up...including Steve (he ended up getting a free t-shirt and they comped 2 beer), we enjoyed our beer and lunch while we continued our visit... Thanks for treating us to lunch! 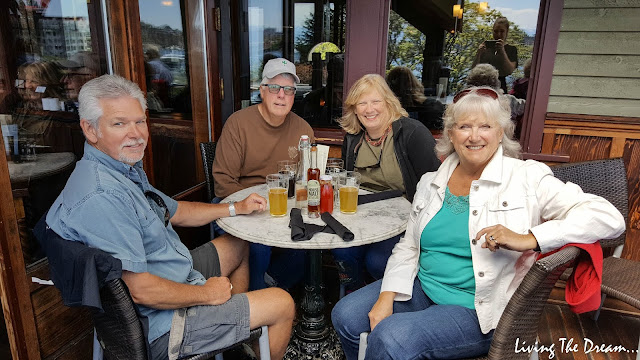 We dropped Harry and Vicki off at the Black Ball Ferry Terminal just before 3:30, in time for the 4:00 sailing back to Port Angeles. Such a great visit and a wonderful surprise! So glad you came over for a visit! Enjoy your summer gig, safe travels and we'll see you in Q next January!

Wednesday (May 1) was another beautiful sunny day. After breakfast, I loaded a ton of laundry into the car and drove over to the laundry while Steve did the dishes and cleaned up inside. Laundry day ended up being a horror show...I had the 3 big front loaders full. Two of them worked fine but the third did not! When I opened the door, the contents were sitting in water! Imagine how fun it was pulling out water saturated flannel sheets and duvet cover and getting them over into a (now empty) top loading washer! To top it all off, when I went to the office to let them know of the fiasco, they had no mop (apparently only the cleaner has one and she is not there right now)...so a lady came with a roll of paper towels and was down on her hands and knees cleaning up all the water on the floor!

By this time it was going on 11:00 and Steve had to leave for his eye appointment in Sidney. I drove the car back along with the clothes that don't go in the dryer. He headed off in the car, I hung the clothes and then walked back up to the laundry room. Steve stopped and picked me and the rest of the laundry up on his way back....now that was a wonderful few hours!

After all the laundry was put away and the bed was made, we headed off into Victoria. We stopped at his old office to see his former co-workers and then made a couple of stops at stores to look at faucets for the trailer. It was all high end stuff and surprisingly chrome seems to be the most popular. Based on what he saw, looks like Home Depot is our best option.

And finally, my appointment at RebalanceMD with an orthopaedic surgeon. There ended up being absolutely no question that I was ready for a left knee replacement. Unfortunately the wait for surgery will be "approximately" 4 to 6 months. I also let them know that I would be available for any last minute cancellations. He gave me a booklet about knee replacement surgery, and left us with his receptionist who gave me a lab requisition for blood work and ECG.

The lab work has to be done at a hospital (why, I don't know), so after dropping Steve off at home, I went right to nearby Saanich Peninsula Hospital for the lab work. My timing was impeccable...I had a very short wait before being taken in.

I was home within an hour to find Steve had also just gotten home after his daily power walk down to Island View Beach and back.

Now the waiting begins...in a perfect world, I would have immediately been given a surgery date so that we could plan and ensure we have RV parks reserved. As it stands right now, we have parks reserved on the island until September 2. Then we go over to the mainland and stay in Fort Langley until October 2...after which we would be heading south for the winter. The knee replacement is major surgery...not to mention the physiotherapy and rehabilitation afterwards. So we could likely need to stay in the Victoria area longer than September 2...and possibly months after. It could possibly not be an issue if I were to be lucky enough to get an early surgery date...but we can't count on that. So I guess we should check out the possibility of staying here beyond September 2 and going south is up in the air....