The last few days since arriving back in Quartzsite haven't been very eventful. Mostly very lazy mornings and then getting a few things done around here.

Sunday, while draining the dishwater Steve heard water pouring beneath the trailer. Geez! RV Lifestyles left the grey water gate valve open. Steve closed the valve and noticed the valve was also leaking! They hadn't tightened the 4 bolts on the valve. So out came the tools and Steve crawled under the trailer to tightened them up. We can't believe the shoddy workmanship we've received from what we thought was a reputable company.

Later we put up the clothesline and Steve raked the rocks from under the awning so we could put the outdoor mat down. We also put up the sunscreen. 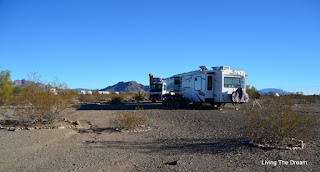 Monday, we headed into town to run a bunch of errands. We picked up a parcel at the post office (our camera that we had left at Rob and Angie's in early October...thanks for shipping it to us Rob!) and then continued onto Quiet Times to pick up more parcels...some solar Christmas lights and the macerator pump that Steve had ordered from Amazon.

After that, we stopped at Grandma's Heaters and Fireplaces. Steve had called Camco about repairing our Olympic Wave 8 heater we bought last winter. A mouse got into it and damaged the platinum pad making it unusable. Camco said they won't supply a replacement pad so we'd  have to ship the heater to them for repair. The pad is $84, $48.50 installation and $70 for shipping there and back for a total of $202.50 U.S. With the current exchange rate that works out to around $275 Canadian! Well that sucks. We paid over $300 for it and got less than a year out of it. Lesson learned. It's been a great heater but we had also learned that the platinum pad is susceptible to dust which is exactly what we have lots of in the deserts of the southern U.S. So it looks like we might just go ahead a buy a new one. We're looking at a Superior 20,000 BTU Vent Free Blue Flame Gas Heater for $265.
Steve can't seem to find any reviews on it on the internet but Red and Pam had bought one last year while here, so I sent Pam a text to see how they liked it.

Our final stop was on E. Kuehn Street and the vendors area...not many here yet... 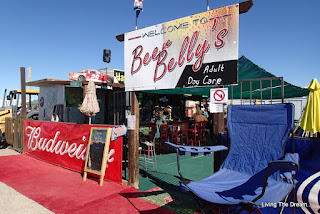 Steve had a few things to pick up at K/B Tools and then we stopped for a beer at Beer Belly's Adult Day Care. It's certainly not very busy here yet...but just wait until January! 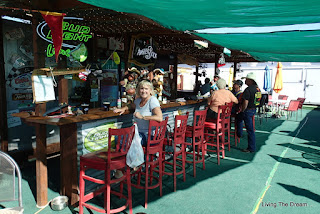 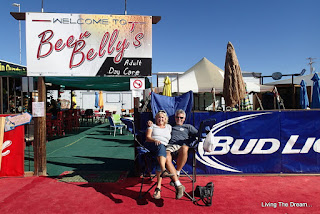 Tuesday morning, after spending last evening researching propane heaters and then hearing back from Red and Pam that they like their heater, Steve decided to go ahead and get it. So late morning we headed back into town and picked it up.

Once home, Steve set about putting it together. While he was doing that, I did some banking. He had it together and the propane hooked up, but he couldn't get it to light. After a number of tries (and some choice words), he packed it back into the back of the truck and headed off to Grandma's Heaters and Fireplaces.

A little while later he was back. Apparently it takes quite awhile for the propane to get through on a new unit...anyway, it took them some time before they managed to get it going.

So, we're all set for the cold front that is supposed to be coming through. We are in for quite a drop in night-time temps...down to 36F/2C and daytime highs of 59F/15C to 63F/17C this week.

Wind and dust were the order of the day Wednesday. We were up just before 7, had our coffee and then decided to get our resistance exercises over with. It was shortly after 12 noon when we finally headed off in the truck to Parker, AZ...wow, where did that morning go to?!

We decided to make the trip to Walmart to pick up a bunch of stuff...most important on our list was a TracFone aircard. With all of the phone calls we've had to make...funeral arrangements and such, well, we were out of minutes. Normally, we don't use our TracFone all that much...usually just emergencies. Email, texts...Hangouts and Messenger...is our usual mode of correspondence.

The dust driving to and back from Parker was pretty thick...the mountains were just mere shadows in the distance!

Posted by Dianne and Steve at 7:12 PM