I'd say we had the ultimate in lazy days on Monday. Although we were up early (5:00), it was 8:00 by the time we decided to get our resistance exercises over with and get on with our day. Mind you, all that 'our day' consisted of today...for the most part...was sitting outside in the shade. It was another hot day...even hotter than yesterday...with temps up to 89F/32C (93F/34C inside the trailer!). It was also a very windy day...which is supposed to be bringing in cooler temps, yay!

We got some good news today. After not hearing back from Traveland RV on Friday (Tyler said he would talk to the Service manager and get back to us), Steve called Tyler. Apparently the Service Manager had been away, was back today so Tyler would talk to him and call us back...gee, Tyler, why not send us a quick email Friday and let us know that? Anyway, Tyler did call back a little later and said that Traveland RV will cover the cost of the grey tank repair we had done at RVZZ. Yay! We are so glad they stand behind their work. So the $453.16 U.S. repair bill became $606.33 Canadian with the exchange rate and Visa's cut. This is why we are hunkering down in Quartzsite this winter and travelling less.

Charlene called later in the afternoon and suggested that since it was so hot and windy, would we like to go into town for Chinese food. That sounds like a heck of a good idea! So at 5:00, they picked us up and we headed into Blythe for dinner.

We enjoyed a good feast of Chinese food....and as we were finishing up, the waitress came by to say our meals had been paid for by the folks sitting at a table behind us. When we arrived, Charlene and Dennis were greeted by these two ladies (mother and daughter, I believe) that work in the school system here in Blythe. Well, I guess when they left they also paid our bill...wow...and they don't even know Steve and I...Thanks Ladies! 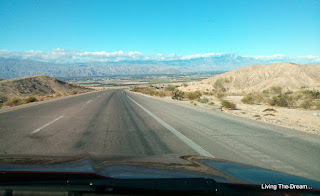 Tuesday morning Charlene and Dennis picked us up shortly before 7:30 a.m. and we were off to Palm Springs. Dennis has an appointment with his Cardiologist and they invited us along on the day trip to the city. 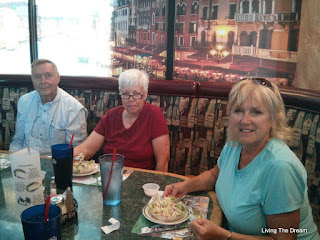 We arrived in time for Dennis' 10:00 appointment. Charlene, Steve and I waited outside in the car chatting and about 45 minutes later, Dennis returned. After a stop at AAA so Dennis and Charlene could finalize their cruise plans (they leave later this month), it was time for lunch at Mario's Italian Cafe. Dennis and Charlene were treating us. We had a fabulous pasta lunch and then we shared two orders of Tiramisu,,,absolutely the best I have ever tasted! They certainly didn't hold back on the liqueur! If you're in the area give them a try...their prices are very reasonable. Thanks guys!

After a shopping stop at Sam's Club, we were on our way back home...arriving around 4:30. Thanks for a great day, Charlene and Dennis! We enjoyed the day trip to the beautiful Palm Springs area! 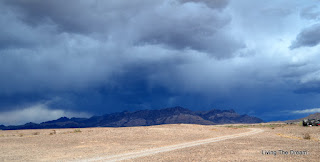 Wednesday was a much cooler day...and windy! We did our resistance exercises, had breakfast and showers...and then Steve headed outside to offload the quads and sweep out the truck, while I did the dishes and cleaned up inside.

Steve checked the oil in the quads and put more air in the tires. While he was doing this, my quad would not stay running while idling...well, that's wonderful. He took it for a short ride and it ran fine but quit again when left idling. Looks like we'll be taking it into a shop to have it looked at. 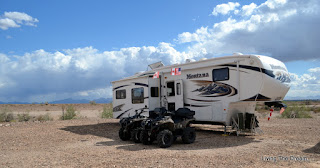 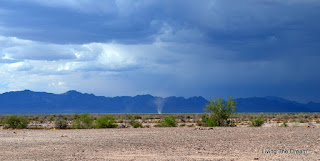 Our plan had been to get out for a walk but by the time we were ready, the wind had really come up with the threat of rain. Nah...no fun trying to walk in that! So we basically ended up hunkered down inside while the wind howled outside. There were also some incredibly ominous clouds but other than a short stint of rain, it mostly skirted around us. Steve got some shots of the dust devils swirling around.
Twin dust devils...

Rain in the distance...

Blowing dust. There is a new massive solar farm at the base of those mountains that may require some cleaning of their solar panels... 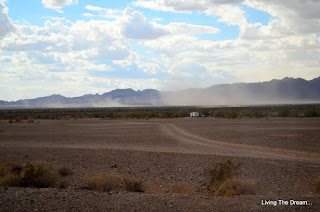 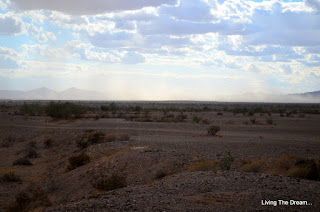 Although my quad won't idle, it seems to be okay when in gear and moving, so we plan on going out for a ride tomorrow. The weather forecast is for sunny, blue skies...and minimal wind.

Posted by Dianne and Steve at 9:19 AM