With the RV-Dreams Boondocking Rally officially over last night, folks started pulling out Monday morning. So we spent most of the morning outside chatting, discussing next stops and summer plans...and giving big hugs and handshakes. Safe travels to all...hope to see you down the road!

By the end of the day, there were 5 rigs left in the "circle", along with Pam/Red and Stan outside of the "circle". 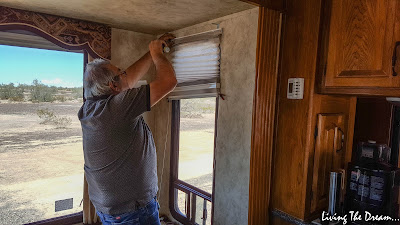 When Steve opened our day/night shades this morning, he noticed one was acting up...and found the string fraying. We'd better get Larry "the blind guy"out to fix it while we can because sure as heck, as soon as we leave the area, it will break! He arrived early afternoon and ended up fixing 2 blinds...so we should be good to go. I think he has restrung all of the shades in our trailer now. If you're in the area and ever need your day/night shades restrung he can be reached at 928-273-3719. He's very chatty but does a great job and has a lifetime warranty on his work. 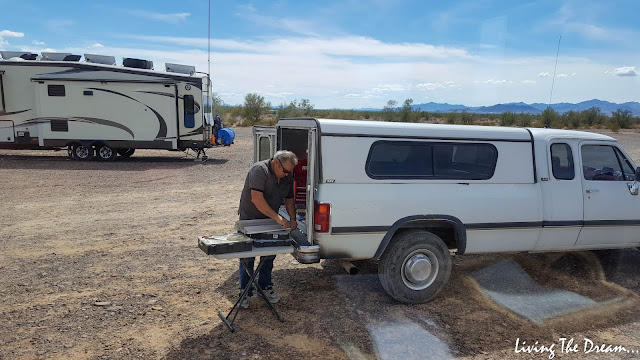 Steve spent the rest of the afternoon editing a blog update. I was relaxing in my chair outside with my knitting when I received a text from Pam asking if I wanted to go out and pick up a few geocaches. A few minutes later, she picked me up in the Rhino...and off we went. We were out about an hour and bagged 4 geocaches in the area... 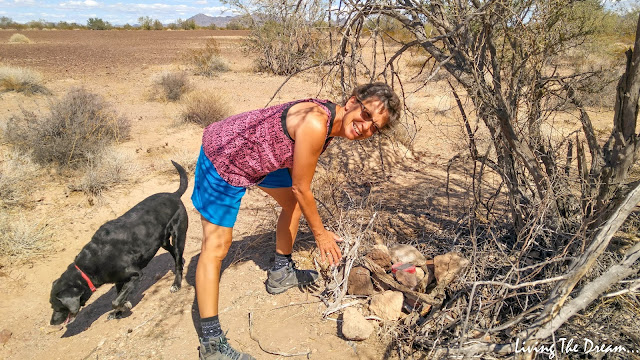 After doing some wild "booniebashing" finding our last geocache, we eventually found our way home... 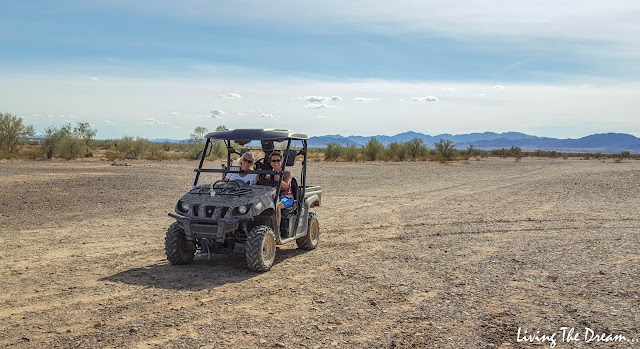 Here we are at happy hour...crammed into what little shade we could find. It had been a beautiful sunny day with the temps in high 20's C, low 80's F. Left to right around the circle...Brock, Nathalie, Steve, Vicki, Harry, Pam, Red and Stan... 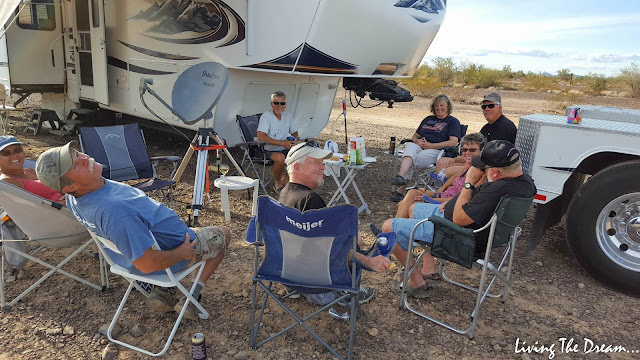 After dinner, we ended the evening around our last campfire here on Plomosa Road...Brock, Nathalie, Red, Vicki, Harry, Rick, Kathy and me... 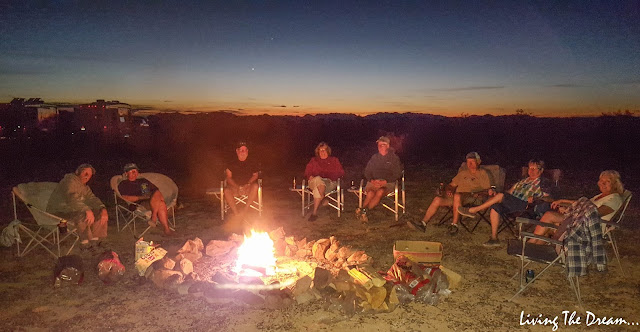 Tuesday was a cloudy day but it was still hot...into the 80's again. Steve managed to take advantage of the early morning calm winds and get quite a few flights in with his RC planes...Red joined him with some of his planes too.

About 9:00, he went with Red and Stan to drop garbage off at the Refuse Transfer Station and then get propane tanks filled at the RV Pit Stop. They were back about an hour later...time for Pam and I to load laundry into the truck and head into the laundromat. We spent a couple of hours getting our laundry all done up and then rewarded ourselves with lunch at the restaurant adjacent to the laundromat.

Unfortunately while I was gone, Nathalie and Brock pulled out....so I didn't get a chance to say goodbye. Safe travels you two! It was great seeing you both (and Sophie) again...hope we connect again next year!

When Pam dropped me and our clean laundry off, Steve was doing a little maintenance work...re-seal the window on the trailer door that has been leaking when the rig is washed. Thinking the window frame would be the same as our old trailer he had purchased a roll of wide putty tape when we were in Yuma. As it turned out this frame had two thin foam like gaskets in it, so he drove into Q to Lifestyles RV, surely they'd have it. Nope, all they use is the wide putty tape...Geez what a waste of time that was! With it being so hot out the tape was very sticky. 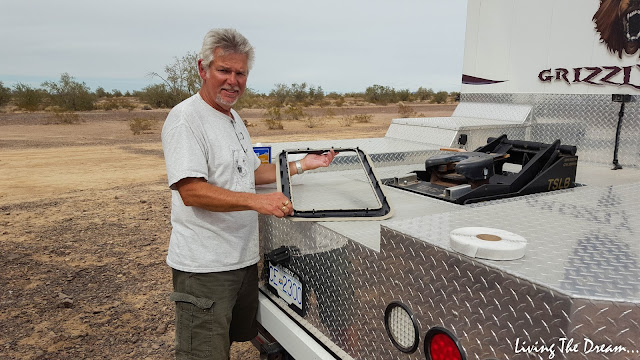 Just some final trimming with a credit card and it was all done, lots of waste not having the right stuff though. 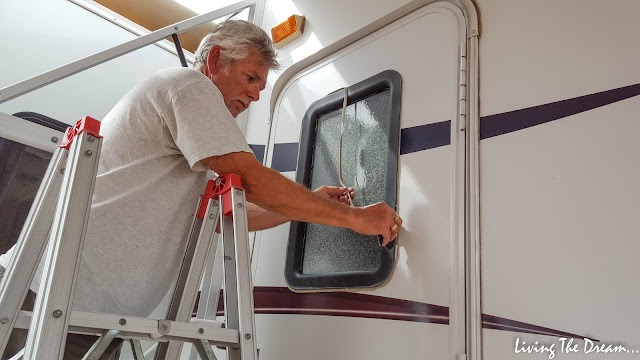 At 4:00 Harry and Vicki picked us up and we headed off to La Posa South LTVA and Les and Sue's desert abode. They had invited Bill and Kelly; Steven and Linda, along with any others still left in the area out for happy hour and dinner. I stole this selfie of the group taken by Steven (well, I actually asked and received his okay). Thanks Steven! He obviously has the art of "selfies" mastered and is an accomplished photographer! Starting at the front and then each row behind...Steven (of course), Pam, Linda (holding Popo, The Rambling RV Rat), and Les; Red, Vicki, Kelly, Sue and me; Stan, Harry, Bill and Steve... 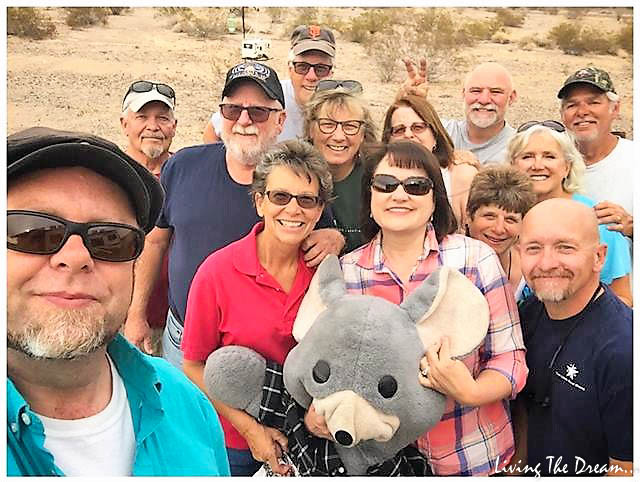 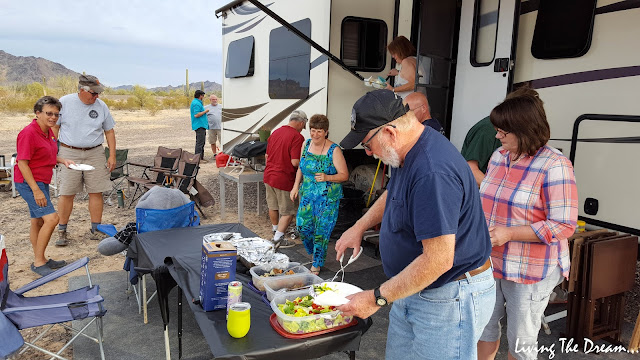 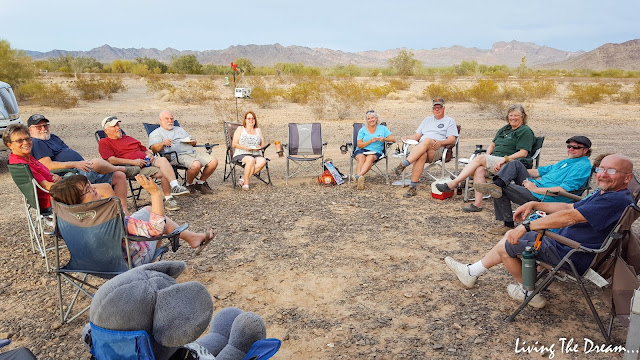 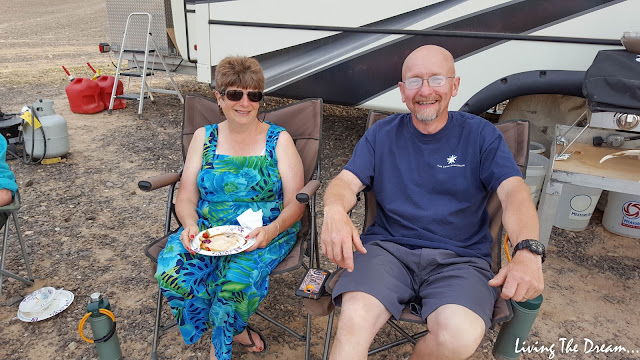 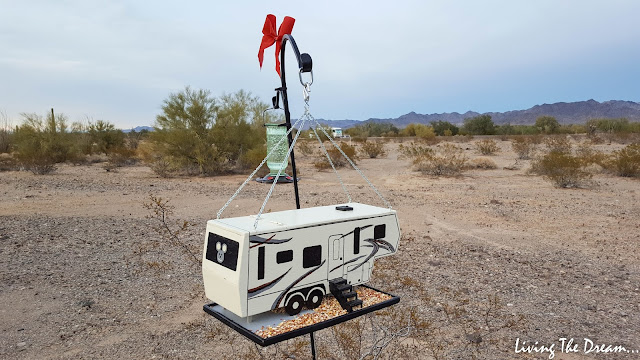 We had an absolutely spectacular sunset tonight... 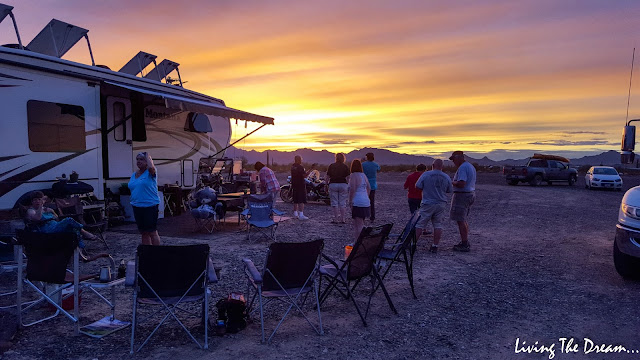 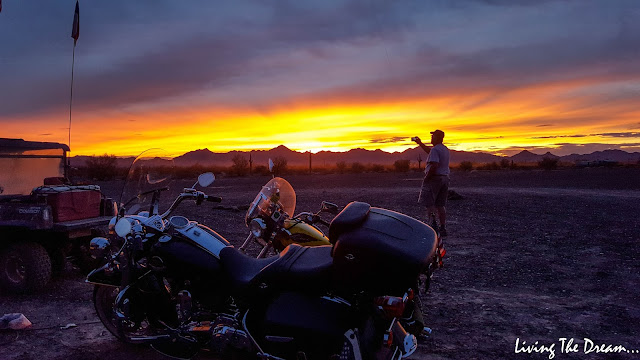 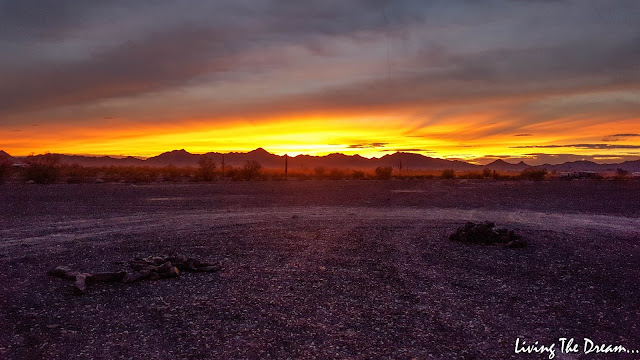 Linda, Steven, Pam, Red and Stan bid goodnight as the sun went down, Les lit the campfire, and the rest of us enjoyed another hour or so chatting. A beautiful evening! So good being able to have one final get together with you folks before we start our trek north! 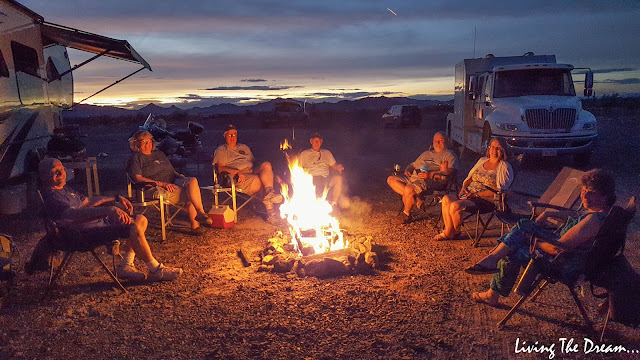 Well...the only way to describe Wednesday is...WINDY! It actually started up in the wee hours of the morning...meaning there would be no RC plane flying this morning.

Harry and Vicki were all packed up and on their way fairly early this morning, stopping by on their way out to say goodbye. Another great couple of months spent with great friends! Safe travels and enjoy your summer gig at the winery...looking forward to hearing all about it next winter!

Around 10:30, Steve and I headed into town to run a few errands. Our first stop was at the post office, only to find the doors locked...they are closed from 11:00 to noon for lunch! Sheesh! So we took care of our other errands first, diesel and drinking water, returning to the PO a few minutes before noon...and joined the line up of folks waiting for them to re-open.

Back home, we had a bite to eat for lunch and then basically chilled for the rest of the afternoon. The wind rocking the trailer...Steve even moved the truck behind the trailer to try and break the wind a bit but it really didn't do much good. It was another hot day and although we tried to keep the windows open, it was getting very dusty...consequently, it got pretty warm inside. We kept our door open, though...so we still had lots of dust coming in!

At 4:00 we walked over to Red and Pam's...or should I say "got blown over"! We enjoyed happy hour with them, along with Stan, and then Pam announced dinner was ready. Spaghetti, stir-fry veggies and garlic toast...delicious! Thanks Pam! 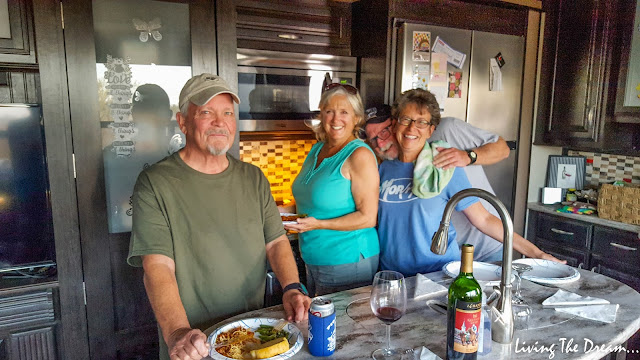 After dinner, we thought we would re-create our "Eagles Night" that we did 2 years ago while together in Yuma, so dessert and then the "Eagles Farewell 1 Tour Live from Melbourne" DVD would be at our place. Steve took this picture as we battled the wind on the way back to our trailer...look at that dust! 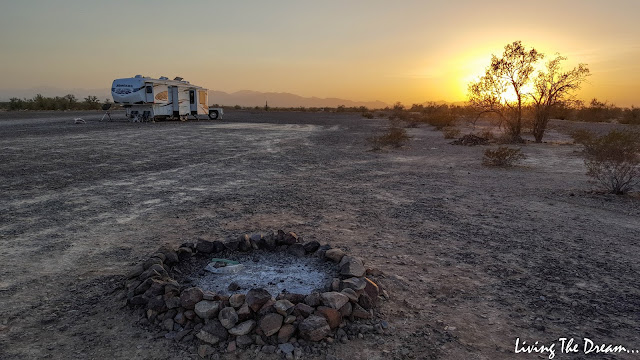 The concert at our place turned out to be a bust...we hadn't used our DVD player since our last "Eagles night" 2 years ago and Steve couldn't get it to work; probably full of desert dust! We tried playing it from our laptop via HDMI cord to the TV however couldn't get the audio to play through the TV. It just wasn't the same listening to it through the laptop speakers, so we took the DVD and went back to Red and Pam's. Ahhh...that's better! 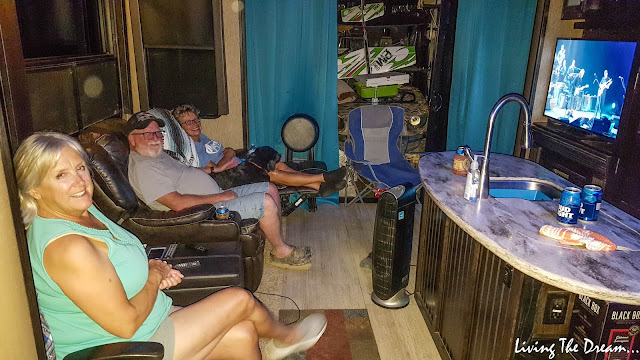 Thursday morning...and it was still windy! We didn't see him leave, but apparently Stan pulled out just before 7:00. He said he would be leaving early, so we said goodbye to him last night...safe travels, Stan is was nice meeting you!

Shortly after 9:00 Red and Pam were all packed up and ready to go. They stopped by on their way out and after big hugs, were on their way. We'd already said goodbye to them in Yuma...will it really be goodbye this time, or will we see you again in a few days? Hard to say but nothing is planned...so goodbye friends...safe travels and we'll see you next year!

Steve spent the morning packing up outside...I gave him a hand with a few things but spent most of my time inside out of the wind. I packed up what I could in preparation for leaving tomorrow morning. After that, I worked on the laptop...paid some bills and then researched some possible stops on our route home.

With everything packed up, inside and out, that could be done today, we basically chilled the rest of the afternoon. For some reason, Steve is having a tough time deciding on our route home...so more time was spent on his iPad...and road atlas. Snow and temps in the teens are in the forecast in Ely, NV the route we wanted to take up hwy 93. We may have to take the dreaded I-5!

The only thing we know for sure, is that we plan on leaving early tomorrow morning for Big Bend of the Colorado State Recreation Area outside of Laughlin, NV...looking forward to seeing Steve and Debbie again! Bonus!