We had a very lazy start to Saturday...as usual, we got up early but it was going on 10:00 by the time I climbed into the shower. Mind you, I did get quite a bit of stuff done on the laptop...yesterdays blog update, bills paid and a bunch of other little stuff.

It was another cool start to the day but with a clear sky, the sun warmed things up quickly. By noon, it was quite comfortable going out without a jacket or sweater. And it was shortly after noon when we headed into Benson to meet Loretta and Dave for lunch. It has been three years since we have seen her and were looking forward to connecting with her again.

The test today would be Steve getting into the truck and driving...it would be his first time out since we arrived Monday. Glad to report that he was fine...he's still sore but has been improving each day. Thank goodness!

We met at Benson City Grille at the San Pedro Golf Course and as we walked in, were greeting with big hugs from Loretta...and were introduced to Dave. We enjoyed a fabulous couple of hours catching up over drinks and a delicious lunch overlooking a beautiful golf course. 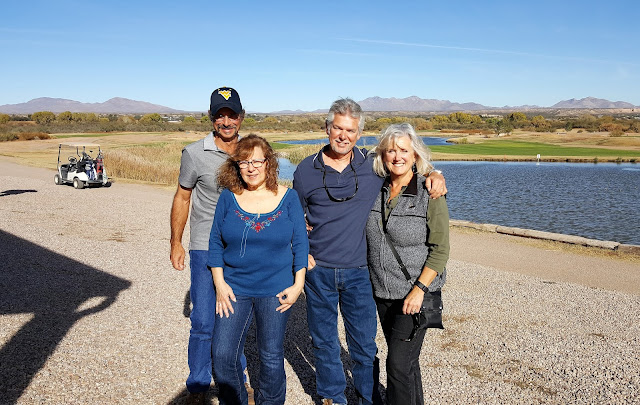 We continued chatting as we walked out to the parking lot...and after big hugs again, we said goodbye. Wonderful seeing you, Loretta, and  meeting Dave...get that motorhome out of storage and come on over to Quartzsite!

Once home, we just chilled for the rest of the afternoon and evening.

Sunday morning we were up and out by 9:30...walking over to the Discovery Center. Our mission is to see if there are any spots available for the Rotunda/Throne Tour...and to get a few pictures around the center. 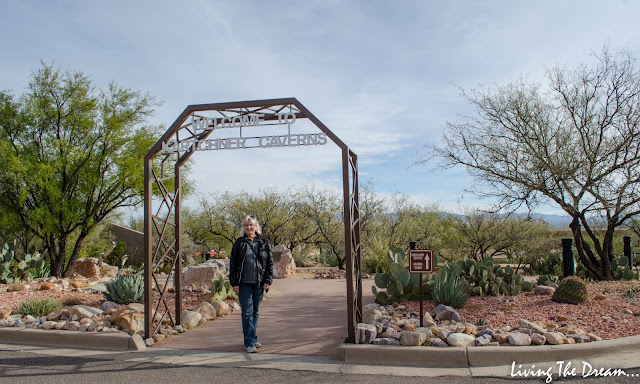 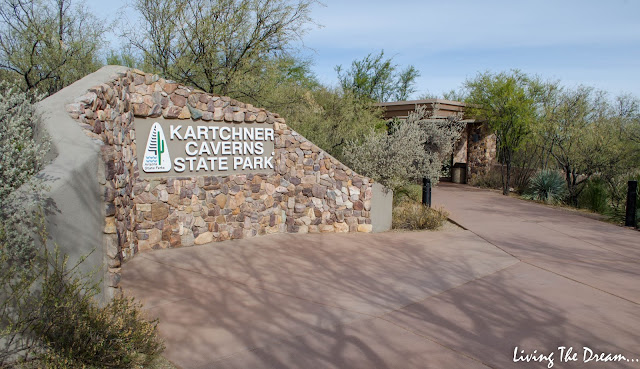 When you do the tours it's amazing how much work was done moving rock and hauling in concrete by wheelbarrow to make the pathways that are all wheelchair accessible. There is an outside display of some of the power tools used to tunnel to the caverns and a video inside about the tunnel pathway construction. 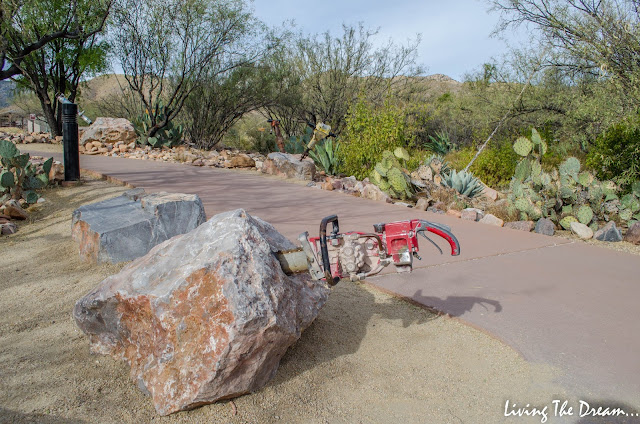 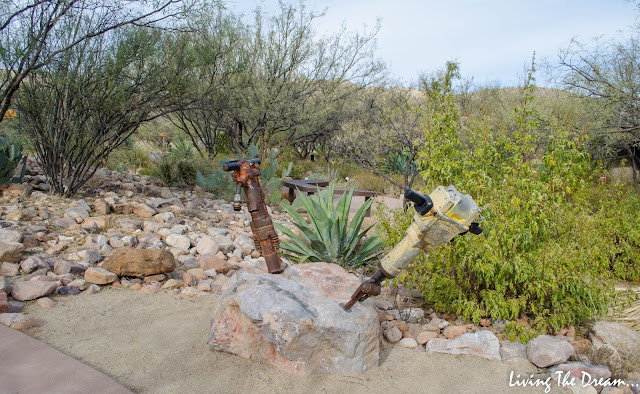 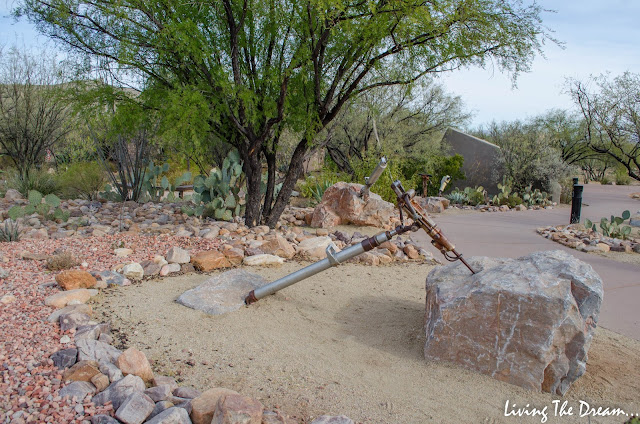 I believe these are a type of Agave...they look like huge asparagus spears to us! 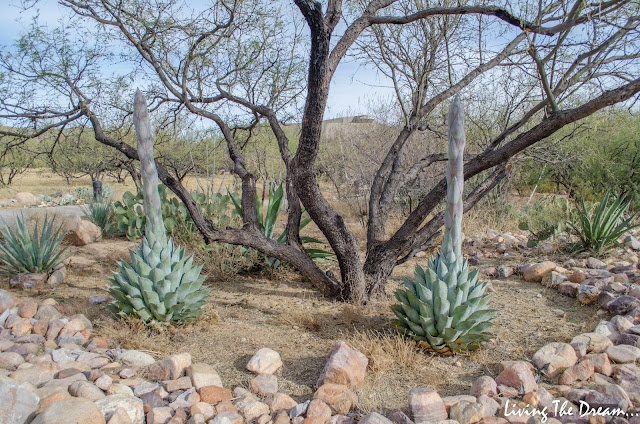 We managed to get two tickets for the 11:00 tour...sweet! Now it was time for some pictures of the exhibit.

Though geology is the focus of many of the museum displays, exhibits also showcase cave and surface ecology, paleontology, archaeology, and history. The cave ecosystem is dependent upon a summer colony of cave myotis bats. Their guano nurtures a miniature world of amazing creatures. Explore the regional displays to educate yourself on the area’s plants, animals, and other attractions found aboveground. Paleontological studies inspired displays describing the area’s distant past. Bones, many from extinct animals, were discovered during the caverns’ development. Evidence of human habitation on the park property is also displayed.

Original 86,000-year-old sloth bones and a 36,000-year-old Horse skull are now on display in the Discovery Center. There are also small bones from bear, extinct antelope, bobcat, ringtail cat, and rabbit. 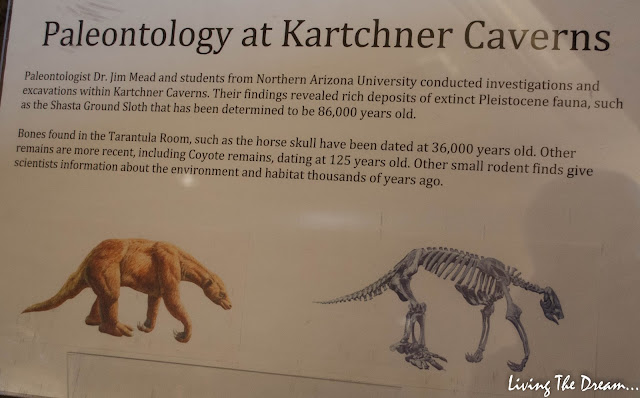 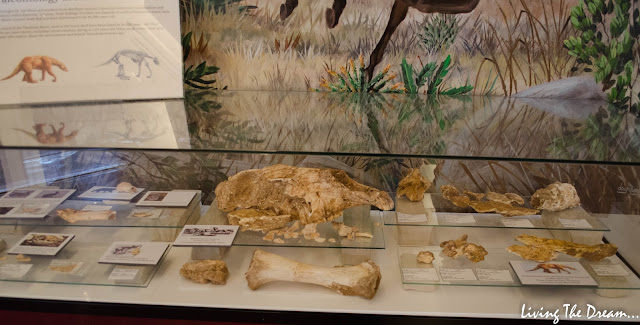 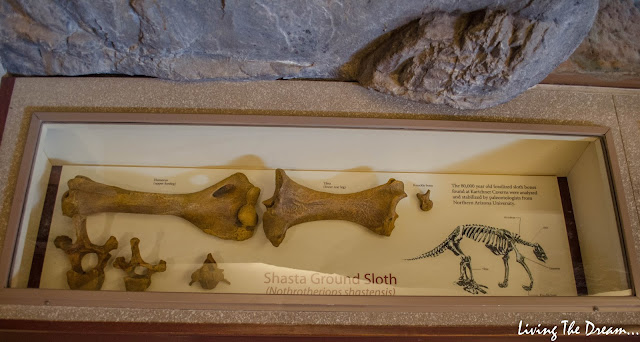 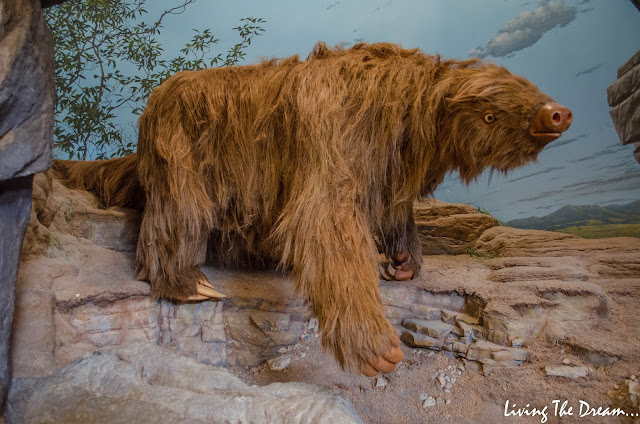 The sloth is a pretty big creature... 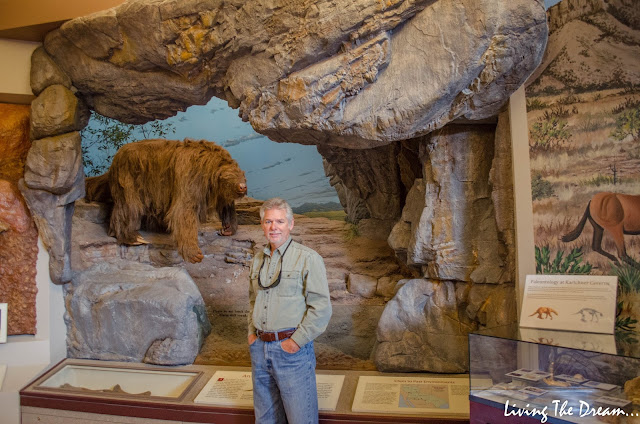 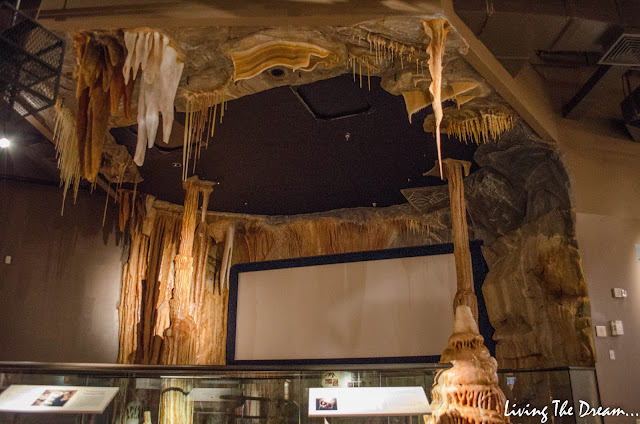 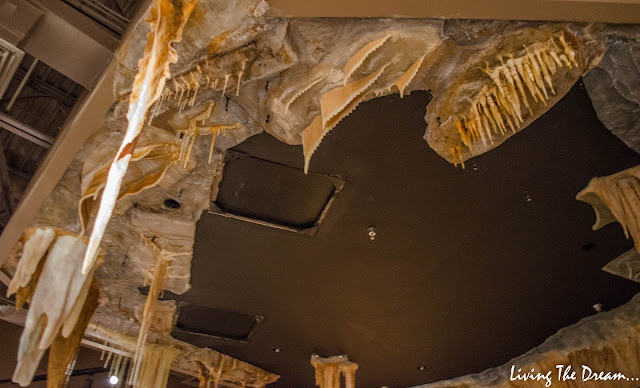 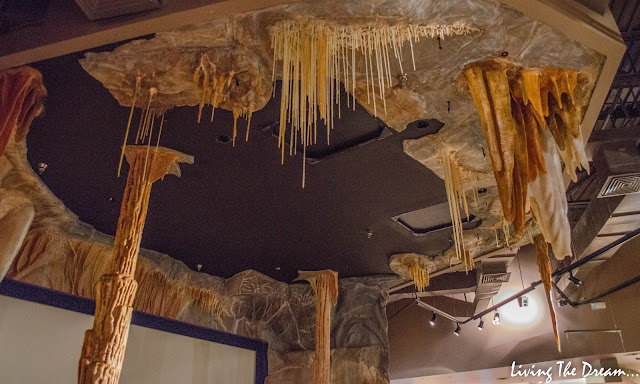 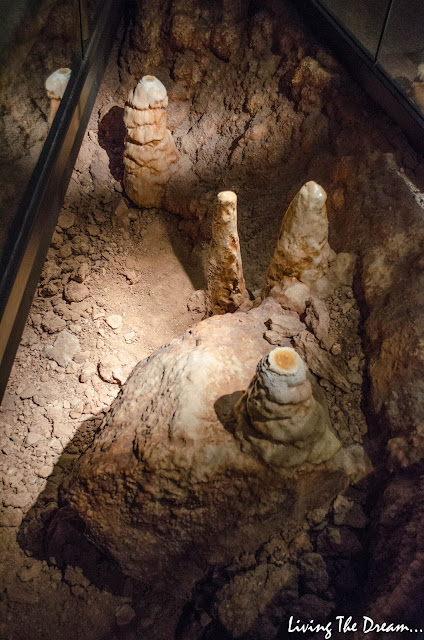 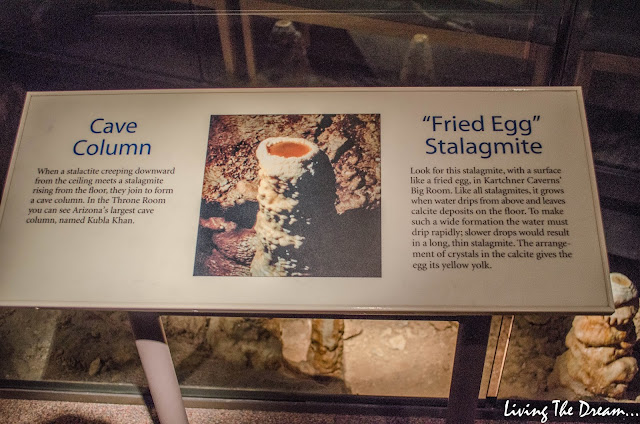 The boots worn by Randy Tuffs and Gary Tenen when they discovered the caverns... 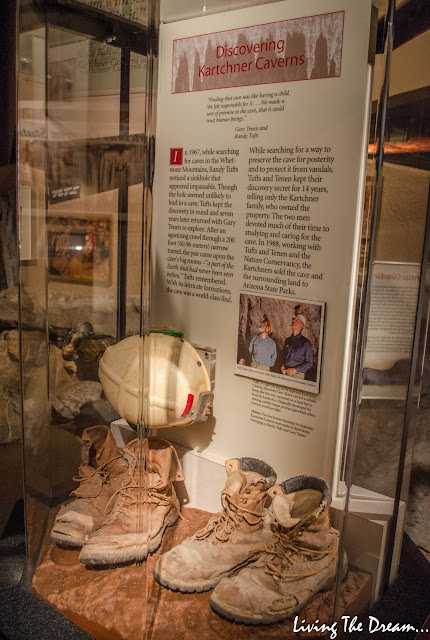 We had about an hour before we had to be back for our tour, so we walked back to the trailer...we had to take back the camera anyway.

At 11:00 we were in the gathering spot for the tour and ready to go...
Rotunda/Throne Tour
Length: ½ mile. Time: 1½ hours.
This tour is a half of a mile in length and takes approximately an hour and a half to complete, 50 minutes of which is underground. Discover the role that water plays in creating the caverns. You will see the discoverers' original trail, 45,000-year-old bat guano, delicate formations and “Kubla Khan,” the largest column formation in Arizona.

Mark, a new volunteer here at the park this year, was our tour guide...he was excellent. All park Rangers and Volunteers that we have encountered during our week here have been excellent...friendly, professional and knowledgeable.

Again, as cameras are not allowed, here are a couple of more pictures taken off Google images... 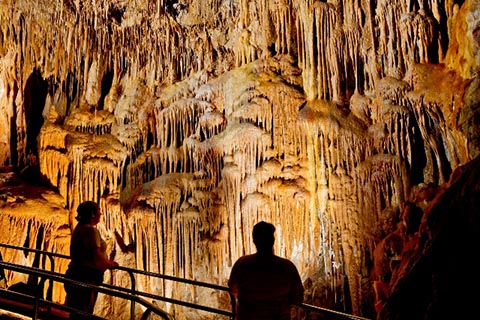 This Kubla Khan...the "grand finale" in the Throne Room....OMG! Pictures just don't do it justice! 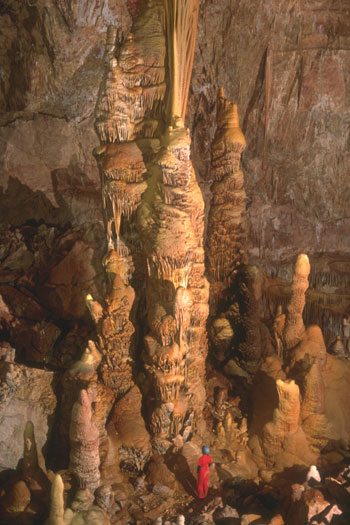 Both tours are completely wheelchair accessible... 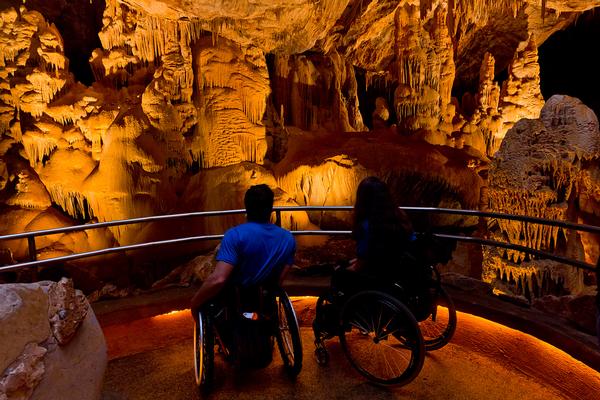 So that concludes our tours of the Kartchner Caverns....our stay here didn't start off well but thankfully Steve improved after his fall (and continues to improve daily) and we ended up being able to see the caverns. Absolutely amazing and we would highly recommend putting them on your "must see" list if you have not already done so.

To wrap up our tours...
Kartchner Caverns is home to:
-One of the world's longest soda straw stalactites: 21 feet 3 inches (Throne Room)
-The tallest and most massive column in Arizona, Kubla Khan: 58 feet tall (Throne Room)
-The world's most extensive formation of brushite moonmilk (Big Room)
-The first reported occurrence of “turnip” shields (Big Room)
-The first cave occurrence of “birdsnest” needle quartz formations
-Many other unusual formations such as shields, totems, helictites, and rimstone dams.

At the beginning of the tour, we learned that there was another couple there from BC, so after the tour we ended up chatting. Glen and Paula are from Vancouver and just down here on a vacation. Well we must have spent at least an hour talking with them...until we parted in the parking lot. So nice meeting you both...safe travels on the rest of your vacation!

It was after 1:30 when we got home...we had a bite for lunch and then decided to get out for a walk around the campground. There is a 2.5 mile moderately difficult hike here in the park that we had been hoping to do but it will have to wait for "next time".

We finished the afternoon off by sitting outside...the sun peaked through for a bit and it was quite pleasant out, but once it disappeared again, we retreated inside.

Tomorrow we pack up and hit the road again....to one of our favourite parks, Catalina SP just outside of Tucson.