The weather forecasters were right with their overnight 'freeze warning'...and I'm glad that I had hauled out a sleeping bag to add as an extra blanket on the bed last night. It was 49F/9C inside the trailer and 29F/-2C outside when we got up this morning. It turned out to be a beautiful day but it took awhile to warm up. However, the sky was blue and the sun was shining...it's the cool breeze we could do without!

Steve got up, put the coffee on and turned on the furnace and then came back to bed to wait until it warmed up a bit. Good news today is that he is moving much better! He's still sore but is improving daily....whew!

As a matter of fact, he feels improved enough that he wants to take a tour of the caverns today. So just after 10:00, I walked over to the Discover Center to see if there was room on the Big Room Tour this afternoon. I was back about 20 minutes later with tickets for the 12:45 tour.

A couple of hours later, it was time to head over...we took nothing with us except our trailer key...No items (bags, cameras, cell phones, backpack carriers, purses, packs, bottled water, strollers, etc) are allowed into the cave while on tour; however, lockers are available at the park to store these items.

Steve had previously asked why no cameras and it has nothing to do with the flash. Apparently they've had issues before with people getting in a huff with others while trying to get their photos, and if a camera or anything else is dropped over the side they will not retrieve it. They are very particular about preventing any damage to...and preserving....the rock formations.

A little background on Kartchner Caverns State Park...
In November 1974, Gary Tenen and Randy Tufts were exploring the limestone hills at the eastern base of the Whetstone Mountains. They were looking “for a cave no one had ever found” and found it. The two kept the cave a secret until February 1978 when they told the property owners, James and Lois Kartchner, about their awesome discovery. Since unprotected caves can be seriously damaged by unregulated use, they knew the cave had to be protected. Tenen and Tufts spent several years looking into the possibility of developing the cave themselves. Some members of the Kartchner family lived in Tucson and were very impressed with the development and operation of Catalina State Park by Arizona State Parks. They decided to approach State Parks to see if the agency was interested in acquiring this outstanding resource. For more about the history, click here.

No camera means no pictures...so Steve has a reprieve from picture taking and editing after this adventure...a rarity!


This is a description of our tour today....
Big Room Tour
Length: ½ mile. Time: 1¾ hours.
This tour is available from mid-October to mid-April and are scheduled throughout the day. It is half of a mile long and takes an hour and 45 minutes to complete, one hour of which is underground. The Kartchner Cavern story is about amazing discoveries past, present, and future. Marvel at the many strange and colorful formations. Learn about the cave fauna, both living and ancient. Experience the wonder of the cave’s discovery and learn about new scientific research and discoveries as ongoing studies continue. Note: Big Room Tours are not available for children under 7 years of age.

At 12:45, the tour group assembled outside and were greeted by Derek, a park ranger and our tour guide. After a brief introduction, he led us to the tram that would take us up to the cave entrance. Since no cameras were allowed, pictures are taken from Google...

The tour was absolutely fabulous...the formations are incredible! I'm claustrophobic but nowhere along the tour was I affected by it. You enter the cave via a "regular sized" hallway...which leads into the huge open cavern with plenty of light. So...that's my experience if you are hesitant about going on the tour because of your claustrophobia.

Here are a couple of pictures from Google...for more images click here. 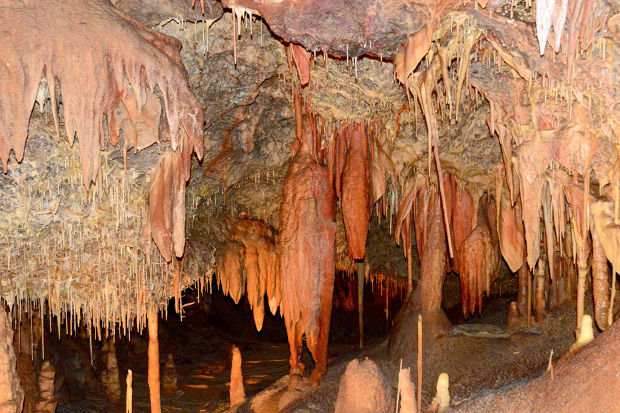 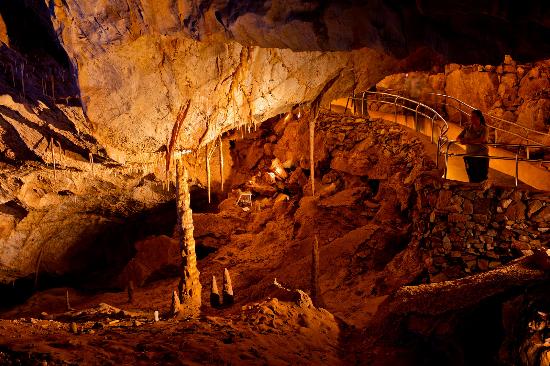 We'll see how Steve's back is Sunday, we hope to take the other cave tour...Rotunda/Throne Tour... 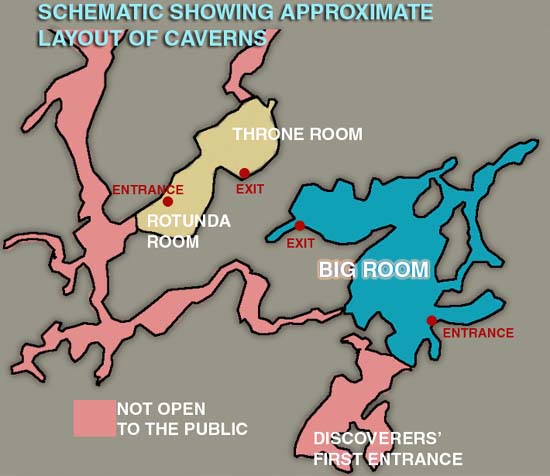 We plan on making a special trip back over to the Discovery Center with the camera....so stay tuned. We want to share pictures of this lovely State Park!