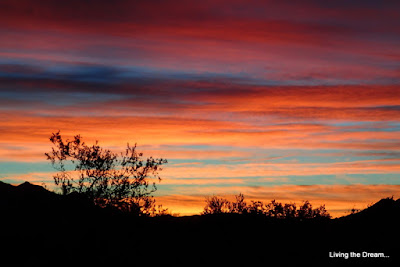 We started off Wednesday with another spectacular sunrise...

After breakfast Steve went out to get the poles and ropes ready for the clothes line. While he did that, I cleaned up inside and then went out and helped him put the line up. It's laundry day...so I need a line if I'm going to dry the clothes outside. Otherwise, it's hang around a very busy laundromat...and although, I would have the laundry all done quicker, I'd much rather do it here.

Steve dropped me off with three bags of laundry and I got them on while he went to Discount Solar and bought four new batteries for the trailer. He was back about 10 minutes before my laundry was done...waited with me, and then we were on our way back home.

After unloading the truck, Steve got started on changing the batteries and I starting hanging up the wet clothes. It was a clear day but a tad windy...which meant the laundry didn't take long to dry... 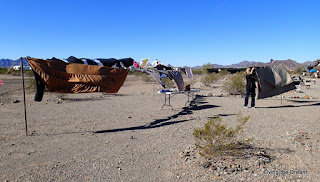 Out with the old Interstate wet cell batteries... 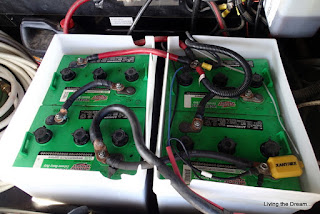 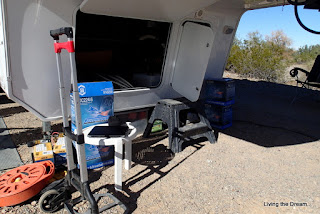 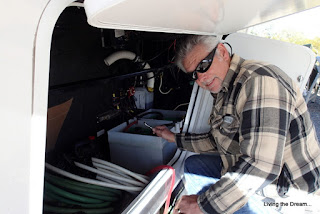 Earl came over and lent a hand...thanks!! 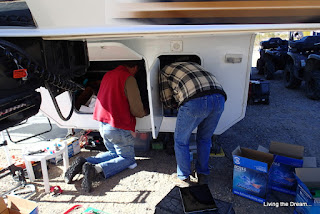 In with the new Fullriver  AGM batteries, $259 each US. Steve really wanted the Lifeline AGM batteries but they're over $300 each... 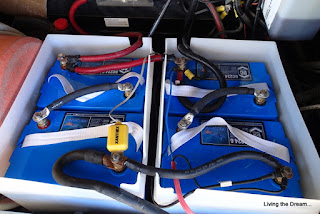 Well, all that went pretty smoothly...except two cables were an inch too short so he had to replace those. $30 for two 8" cables...sheesh! We also had to pay an additional $100 which we got back with the return of the old battery cores.

At 4:00 we hopped on the quads and rode down to Jim and Barb's for happy hour. Barb had picked up a variety of beers on a recent trip to Phoenix and they had invited us over for some beer tasting. We started with a honey ale from "Belching Beaver Brewery"... 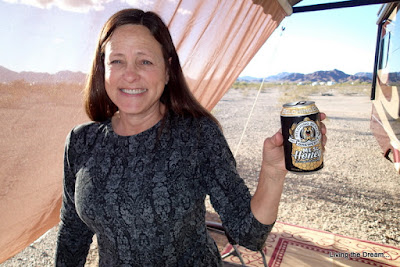 Ray and Deb stopped by for a visit too... 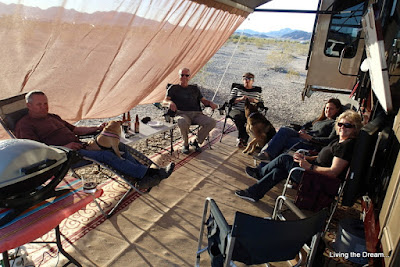 Jim with Daisy...she loves her daddy! Too cute ! 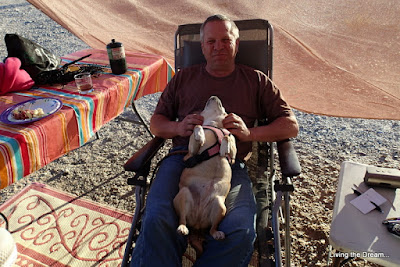 The line up of beer we tasted... 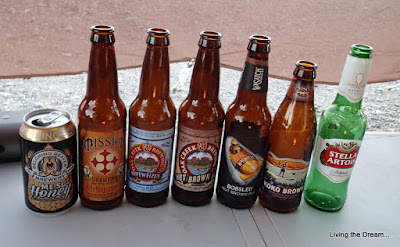 I think the first one we tried was everyone's favourite....with mixed reviews on the rest. Three were nut brown ales...a little darker with a stronger flavour. I think Barb liked most of them...one was too bitter for Steve and there was a coconut one which Barb and I thought was good (in small amounts).

After a couple of hours enjoying good company, good food...and good beer, we headed home. Thanks for the opportunity to taste test all the different beers!

Thursday morning we decided today would be a good day to drive into Parker for some shopping at Walmart and Safeway. Before heading off, though, we got out for a walk...then were on the road by 10:30. After stopping at the local Arco station to fuel up the truck with diesel ($2.51/gallon), we were on hwy 95 north to Parker.

We were back home shortly after 3:00...wow, that was a fast day! We were relaxing inside with a drink when Brian (Got Solar Installed) stopped by to make sure the settings on our Blue Sky solar and Xantrex Inverter control panels were correct for AGM batteries. Thanks Brian! Once done he joined us for a beer and we got caught up since we saw him last.

Ray took this cool picture of our rig with a moon rise...great picture Ray, thanks!! 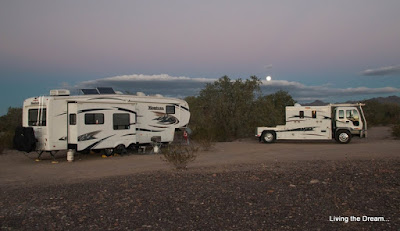 Friday morning after our resistance exercises, Steve headed into the shower...and I headed out for a power walk. Exactly 3 miles...and 49 minutes...later I was back home. Haven't done that for a long time...it felt good! Now I just have to keep it up regularly.

Steve was showered, had had breakfast and was about to head out to cross a few things off his "to do" list when I got back. He started by putting on the tire covers on the trailer, then polishing the door handles on the truck box (the salt had gotten at them too). He lubed all the locks on the truck and trailer then went onto using Ray's dremel to cut off the excess U bolt ends inside our quad boxes. In between all this, he was over giving Ray and Deb a hand with their new sun shade.

My day was spent cleaning, baking...and generally putzing around. Oh...and stressing over my laptop which started acting odd. All seems fine now, though.

Steve got a call from Earl who was visiting Doug from our Cowichan Valley ATV Club. They were having difficulty getting Doug's satellite signal, so Steve hopped on the quad and headed over to La Posa North to see if he could help. 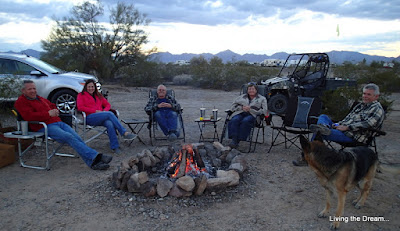 Deb and Ray had picked up some fire wood while in town so invited us over for a campfire and happy hour. Jim and Barb also joined us. Steve eventually returned and joined us...apparently not having any success with the satellite signal.
Another great ending to the day...