We had a relaxing start to they day...having a leisurely breakfast and then paying our bill (laundry and bottled water). Our flight out today doesn't leave until 8:30 tonight so we won't be leaving for the airport until 5:00...so that gives us most of the day. We just have to be packed up and have our luggage out of our room by 2:00.

So we decided to go for a walk and check out a couple of stores...my main mission was to find some Rwandan coffee to take home. Having secured a couple of pounds of 'Maraba' coffee, we headed to Umubano Hotel to have lunch by the pool with some of the group. 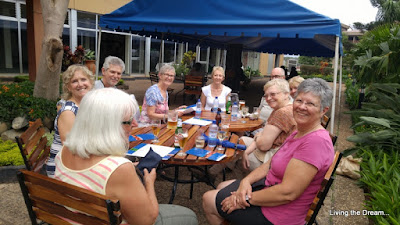 Left to right, around the tables...Joyce (well, the back of her head), me, Steve, Donna, Linda, Alan, Barb, Shelagh and Marianne...
We actually ended up moving the tables under that blue canopy when it started to sprinkle out a bit. A shot from the other end... 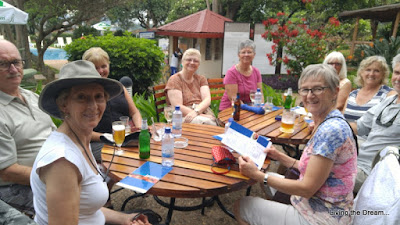 We were back at the Guest House just before 2:00...just in time to close our suitcases and take them downstairs. When we left our room key with the lovely young lady in the office (damn, I can't remember her name!) Steve thought he'd ask if he could make a safety suggestion...provide non-slip mats for the bathtubs. I slipped the other night...going head over heels out of the tub, taking down the shower curtain and hitting my head on the toilet. Other than scaring the 'crap' out of me... Steve was mortified as to what he would find when he unwrapped me from the shower curtain....I was fine, thank goodness!

We spent the next couple of hours on the veranda reading and relaxing. Steve is doing much better but still isn't 100%. He started taking the antibiotic Ciprofloxacin a few days ago and it seemed to make him feel worse. He lost his voice for 3 days and broke out in cold soars and had a sore nostril, making him feeling rather hideous. Most everyone on the tour has been sick at some point...and with varying degrees. Steve and Linda seemed to have gotten the worst of it, both spending a lot of time in their rooms (Steve in Tanzania; Linda here). Nobody really knows what has been the cause of all these ailments. Could have been from the many  un-refrigerated box lunches, or perhaps side effects from the Malarone malaria pills....hard to say. 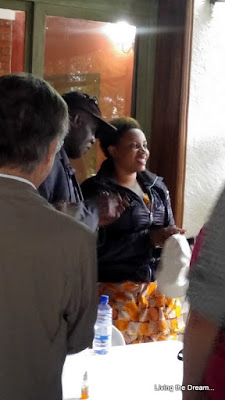 Shortly before 5:00, Annick, our bus driver arrived. Gordon gave a little presentation to her and we thanked her by singing her a special song. Then, with all of our luggage loaded under a tarp in a small pickup truck, we boarded the bus and were on our way to the airport.

The airport was an experience....we've never been through so many security screenings! There was a passport check at the entrance to the airport, then the everything out of your pockets and luggage x ray. We finally get through that and are putting ourselves back together when they call us both over to open our suitcases.

The guard started with Steve's suitcase, opening it and checking it thoroughly. Satisfied, he told Steve he could close it. Then he called a female guard over and it was my turn (interesting that a female had to go through my suitcase...I mean, it's not like my body was being patted down). Now...I had a very interesting time. Our suitcases are divided into two sections...the larger bottom for your clothes and a smaller top section for toiletries (or at least that's how we use it). Anyway, she started with the top section...she wanted to know what the package of Starbucks Via instant coffee was. She made me open it up. Next, was the Emergen-C (vitamin C drink crystals)...this she made me actually open up an individual packet, pour some out into my hand...and taste it! Satisfied, we closed that section and opened the bottom. She rummaged through that..so much for my neatly packed clothing! Then she noticed the zipper on the upper half...that is access to the toiletry section...ah....she actually cracked a smile at that! Satisfied, we were left to put everything back together and continue on into the airport.

We boarded our flight and got all settled into what we thought was going to be a direct 9+ hour flight to Amsterdam only to find out we were stopping in Entebbe, Uganda! We weren't allowed to leave the plane, rather awkward as cleaners came through vacuuming, changing pillows and head-rest covers, etc. All we wanted to do was stand and walk around but were told to return to our seats so the cleaners could do their thing. About an hour later, more people boarded the plane and we were on our way to Amsterdam. Well, we can now say we've been to Uganda...sort of....

So ends our African adventure, the trip of a lifetime and one off of Steve's "bucket list" the Serengeti. Even though he got sick it wasn't a total bust because he got to see mostly everything there was to see the first 2 days.

Thank you so much Uncle Gord and Aunt Esther for all of your hard work planning this fantastic adventure and making it the success it was. Love ya!

It was truly amazing to share this experience with a fabulous group of people...making it so memorable. Thanks to you all for making Steve and I feel so welcome!