First of all, there are a couple of pictures that should have been included in our last post regarding our trailer repairs. This is the MOR/ryde centre hanger that was bent inward with the frame... 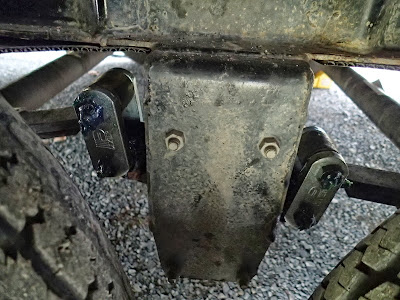 This is the spring hanger support brace that was added to prevent this from happening again... 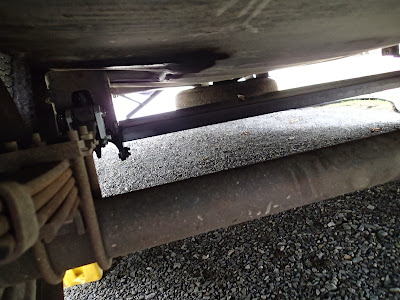 We slept in until after 7:00 Sunday morning and after our usual coffee start to the day, we did our exercises. Steve had his shower while I puttered around...next thing I knew it was after 11:00!  Of course, our friends Neil and Lisa stopped by to say HI and I had just gotten out of the shower...serves me right!

Chris and Angela arrived at about 1:00, with Angela's mom, Lucy. Steve hadn't met Angela's parents yet, however, today he would only meet mom since dad was away on a hunting trip.  We'll all have to get together next Spring when we are back.

We sat and chatted for a bit and then walked to The Fort Pub for lunch.  Can you believe I forgot to bring out my camera?  So, unfortunately no pictures!

A couple of hours later, and after big hugs, we said goodbye to them.  Although our stay here in the lower mainland has been longer than we expected...and included trailer "issues", it was nice being able to see Chris and Angela as much as we did.  Goodbye for now, we'll see you in December when we fly home for Christmas!

The rest of the day was spent relaxing in our recliners with our "devices"...laptop for me and iPad for Steve...researching and getting caught up on the RV forums and blogs we follow.

Monday was another cool, foggy morning...we're looking forward to some sunshine down south!  It was a work day today as we prepared to leave tomorrow.  We both had a lot of things to take care of.

The first thing Steve did was call Trailer Tires and Wheels. regarding new 17.5" Lynx grey aluminum wheels with Goodyear G114 H load rated tires for the fifth-wheel...they come pre-assembled and balanced.   After getting all the information he needed, he called Guaranty RV in Junction City, Oregon to see if they could fit us in next week to have the bearings and brakes checked and install the new wheels and tires.  After waiting for a phone call back from John, an appointment was scheduled for next Thursday...that would give plenty of time for the wheels and tires to be shipped from Ohio. After calling and placing the order for the wheels/tires, Steve checked the info for our extended warranty. There was a section listed for chassis and suspension so he called to see if any of our suspension repairs were covered...unfortunately none of what we had done...oh well, it was worth a try. Then he showered, had breakfast and headed outside to start his work. 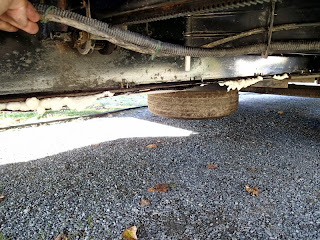 He started by trimming then spray painting the white expanding foam that Fraserway RV had used on the underbelly of the trailer...they had done a pretty shoddy job of putting the thermoplast back on, using expanding foam to seal it.  After sending an email to our service rep at Fraserway, along with pictures, she responded that the underbelly material had stretch and the tech used expanding foam to seal the gaps....this is normal industry protocol and that the only thing they could do is spray paint the foam black. 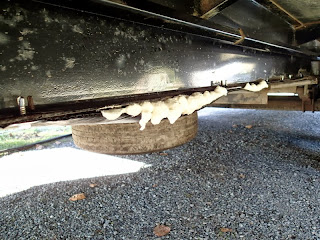 Not very impressed, Steve responded that he'd trim and paint the mess himself...at that time, we were dealing with bigger issues with the trailer. 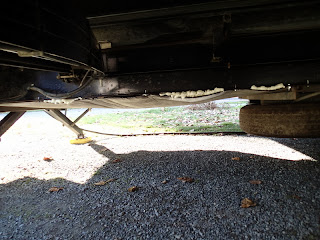 After that, he flushed and sterilized the fresh water tank and then continued onto the black water holding tank, giving it a good flush. Then he offloaded the bikes, washed them and loaded them back onto the trailer with the new cover over them.  After that, he was onto the trailer tires...checking and putting air in them and then just puttered around doing odds and ends that needed to be done before we left.

While he was doing all that I walked down to the office to pay for one more night and also got change for the washers and dryers.  Then I got to work...I did three loads of laundry, purchased our travel insurance, reserved a site at an RV park in McMinnville, Oregon, activated our Verizon MiFi, suspended service on both our Telus MiFi and Koodo cell phone....and also had a nice conversation with my brother, Don.

So I think we are all ready to head off in the morning...we are really looking forward to getting on the road again!

Posted by Dianne and Steve at 5:40 PM