Another week has flown by and since we are leaving for Vancouver Island tomorrow, I thought I'd get our blog up-to-date.
For the most part, it has been pretty routine around here...our daily walks, whether it be at a local park or just here, around the campground...along with the usual daily chores, running errands, laundry, etc.
Wednesday (Oct. 6) was a special day...Steve's Aunt Esther was here from Edmonton visiting her son. So we met her, along with cousin Bev and her husband Rob for lunch at The Boathouse at the New Westminster Quay location. Esther had never met Isaac, so Angela and Isaac also joined us...great timing as it was one of her days off. 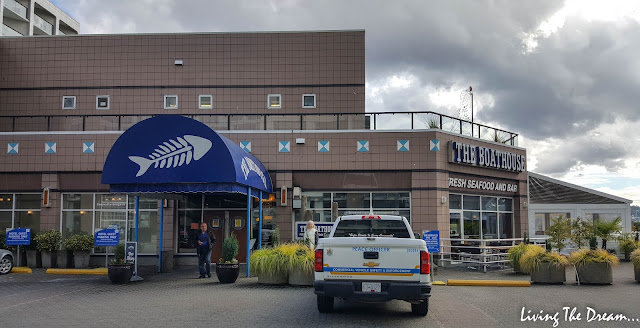 Unfortunately, the waiter didn't do a very good job of taking our picture...so blurry... 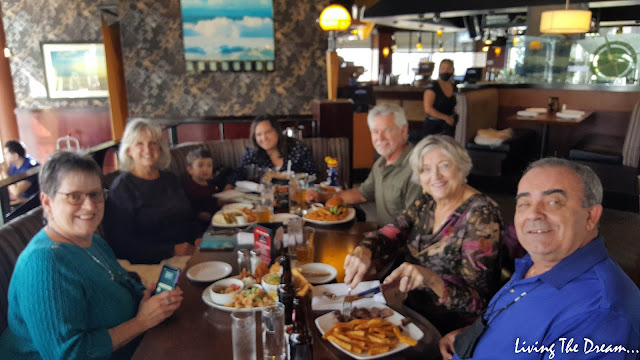 Isaac pointing out the blue water in the picture... 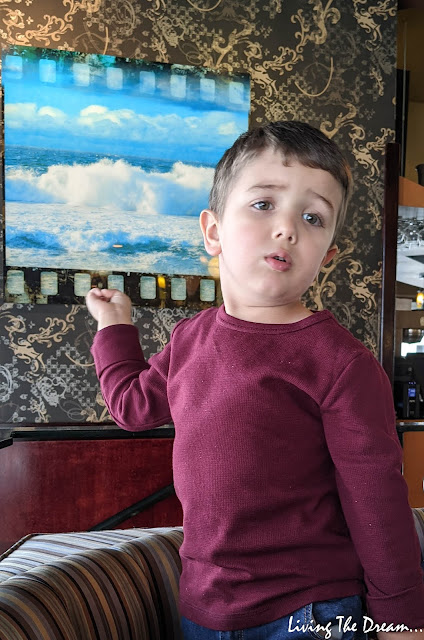 After lunch, we said goodbye to Bev and Rob and the rest of us went for a little walk along the waterfront boardwalk. This is the restaurant from the water side... 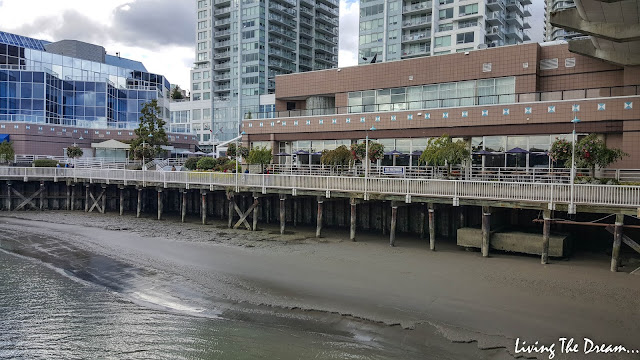 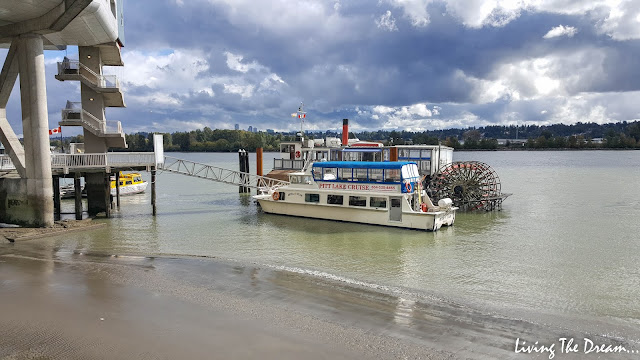 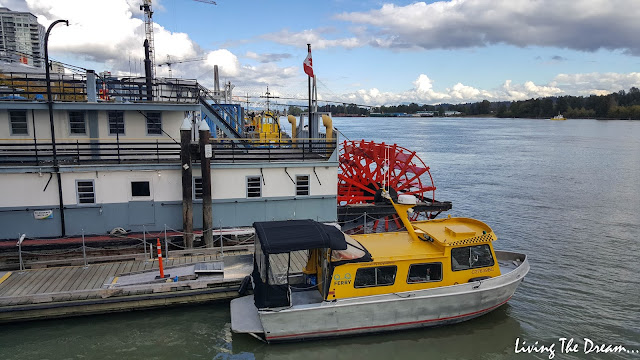 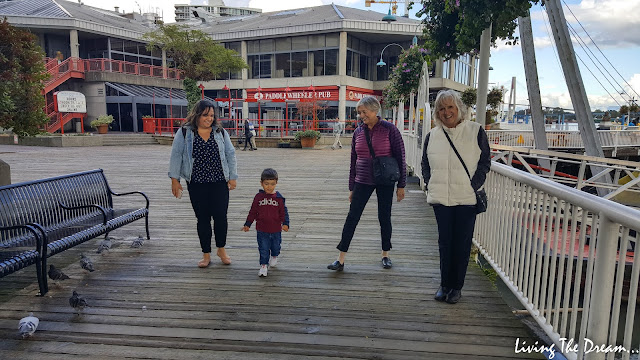 Issac at the pumpkin patch... 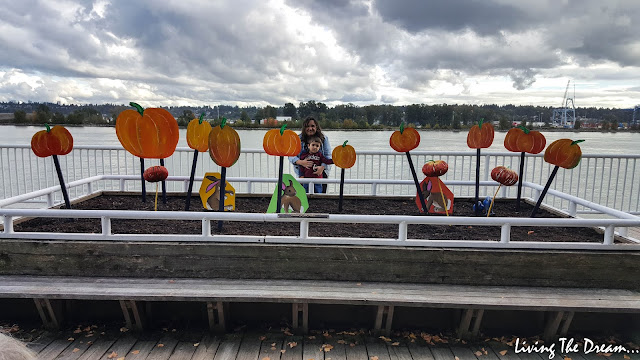 We had a great visit with Esther, Bev and Rob...great seeing you all! But after a short walk, it was time to get back to the car and head over to Chris and Angela's so that we could look after Isaac while Angela went out for an appointment. Yay!...more time with Isaac! Angela actually beat us home as we got stuck in heavy traffic.
Grampa and Isaac playing 'Hot Wheels'... 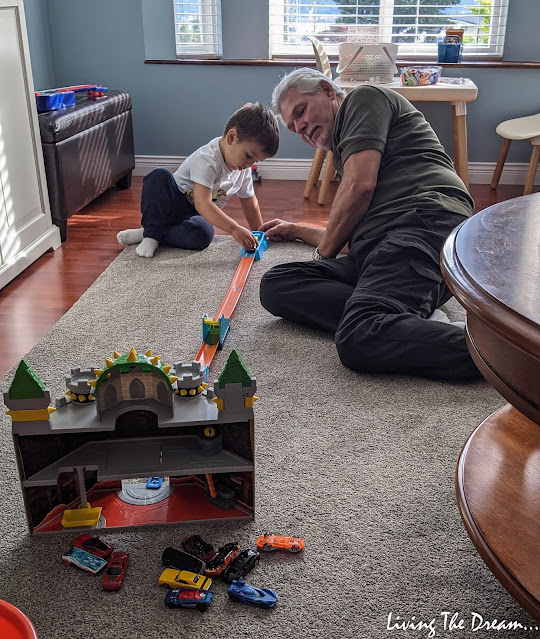 Then it was Gramma's turn...we "did stickers" together... 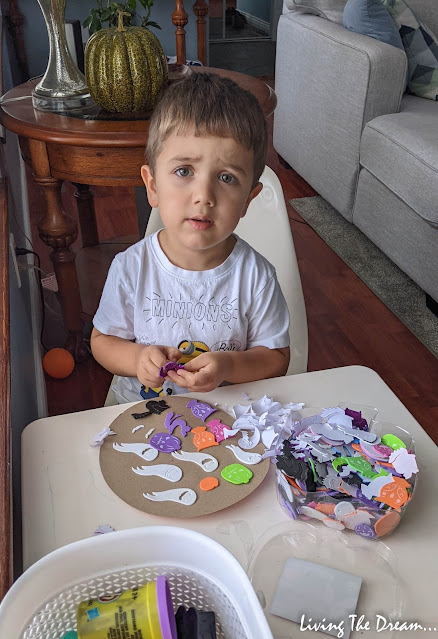 Daddy was home at about 6:00 but poor Isaac only wanted his mommy! He has gotten very attached to his mom lately! It wasn't long ago when all he wanted was his daddy...amazing how they change!
He was very happy when mommy got home! He is showing us his Halloween costume..."Lightning McQueen"...so cute! 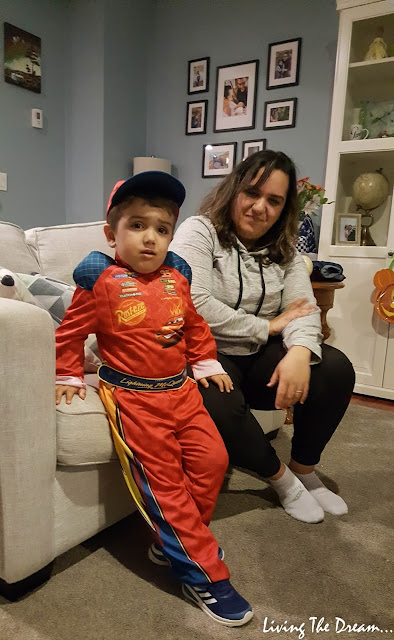 We headed home just before 7:30...Isaac had to get to bed!
On Friday (Oct. 8) we had to go to Abbotsford to pick up our ATV's at GA Checkpoint Yamaha, so Steve suggested I contact my oldest brother who lives in Chilliwack and see if they would like to meet us for lunch. What a good idea, Steve! It has been a very long time since we've seen Doug and Jean...I mean, years! So it was a very special get-together with them! We enjoyed a delicious lunch at Greek Islands Restaurant... 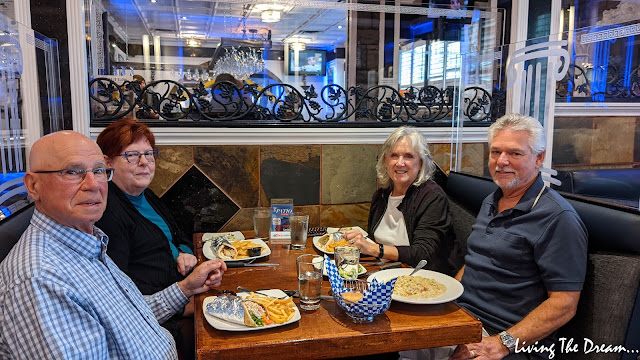 It was go wonderful seeing them! We will definitely have do to this more often...especially if we are unable to go south this winter.
After lunch we went to Costco in Abbotsford to fill a propane tank...wow, what a mistake that was on a Friday afternoon, especially at the start of  the long Thanksgiving Weekend! The traffic in and out was absolutely insane! It was after 3:30 by the time we got home.
Saturday (Oct. 9) morning we got out for a walk before the rain set in...and boy, did it rain all day! We're having our Thanksgiving dinner a couple of days early at Chris and Angela's. I made the stuffing for the turkey and then we headed to their place just after 11:30. I'm cooking the turkey, stuffing, potatoes and gravy and Angela is taking care of the veggies and dessert....a joint effort!
With the turkey in the oven just before 1:00, Angela and I left Steve, Chris and Isaac to enjoy some "guy time" and we went clothes shopping. I came home with a new pair of jeans, some leggings and a couple of tops...thanks for your help, Angela!
Meanwhile Grampa and Isaac were having fun with Stickers! 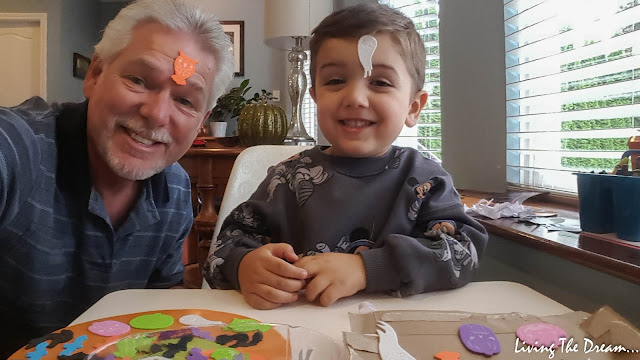 And then Isaac played his guitar to the Police music video on TV... 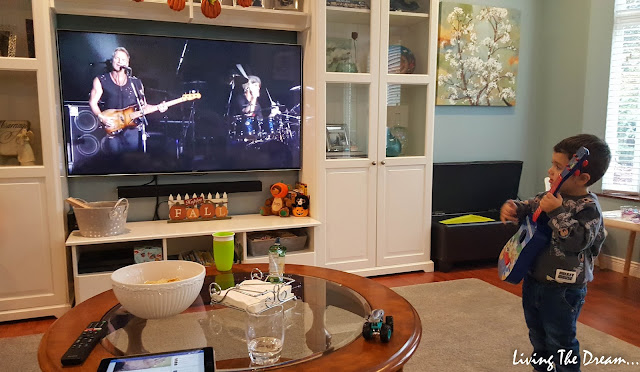 Chris did the honour of carving the turkey (nice face Dianne...no idea what that was all about LOL!)... 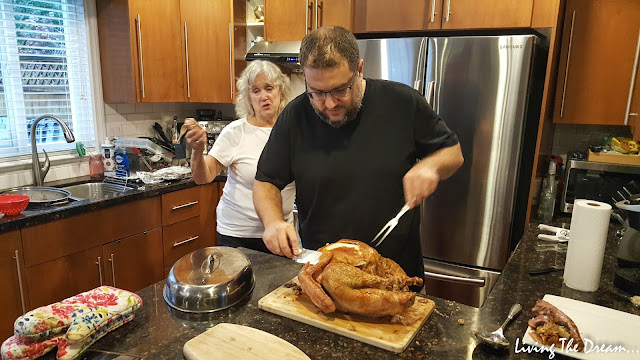 Thanksgiving Dinner 2021! Unfortunately Isaac didn't want to join us in the feast! He's being a very picky eater right now, for some reason. We couldn't even lure him to the table for a picture! 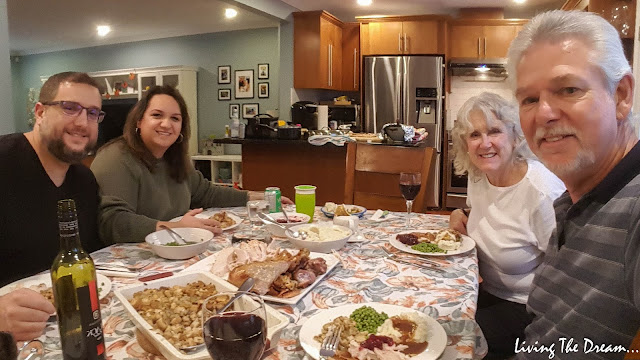 But we managed a family picture! 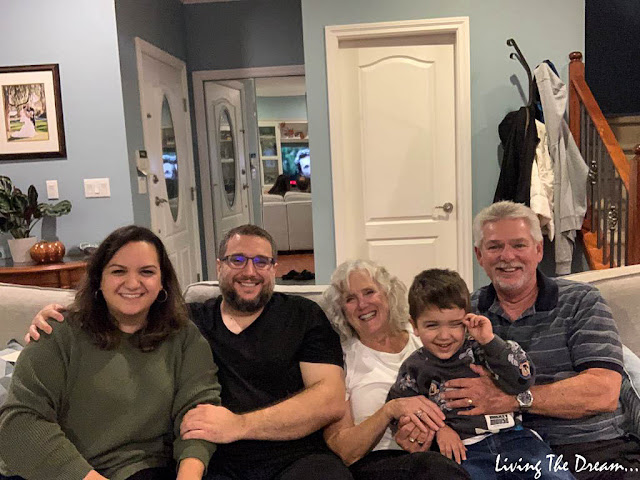 We had made arrangements to stay the night...so nice since it was absolutely pouring with rain outside, besides that way we could both enjoy pre-dinner drinks and wine. Good idea, eh? Thanks for making your spare bed available Chris and Angela!
Sunday (Oct. 10) morning, after a relaxing start to the day, Chris cooked breakfast for us and then we packed our stuff into the car and headed home. Thanks for a great Thanksgiving, guys!
We were all originally planning on spending Thanksgiving Weekend together with Rob, Angie, Conner and Bryce on Vancouver Island but there were a lot of colds, stuffy noses, etc going on with everyone in Rob's household, so Chris and Angela decided to cancel. Besides, it's probably not wise to mix all the kids who are in different classrooms/schools, etc. at this time when we are now in a pandemic of the unvaccinated. All of the adults are double vaccinated but so far Conner, Bryce and Isaac are too young...no sense in taking chances, especially when younger children are also getting infected.
Steve is going hunting with Rob and his buddy Jim the following weekend for a week, so we were just going to stay over...but that ends up being away for 3 weeks, so we decided to delay going over until Wednesday.
Monday (Oct. 11)....Happy Thanksgiving to all our family and friends! So much to be thankful for! 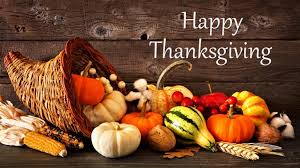 It was a sunny but cool day. We had a great video chat with Rob, Angie, Conner and Bryce wishing them Happy Thanksiving! That was pretty much the highlight of the day.
Tuesday (Oct. 12) we woke up to the coldest morning yet...2.2C/36F! Winter is definitely on it's way early this year! There was even major snow on the mountain highways in the interior of the province over the last few days.
We went out for our morning walk a little later than usual...just so it would warm up a bit! After our invigorating walk, Steve pulled out our suitcases and got started on gathering all of his hunting gear he'll need. While he was doing that, along with some other chores, I did laundry. The afternoon was spent working on this blog update...and watching TV.
Tomorrow we will finish packing our suitcases and head to the ferry. Looking forward to some family/friend time on the island!
Posted by Dianne and Steve