The last couple of weeks since we got back from the Island has been pretty uneventful. Steve had a bunch of pictures to edit and get ready for our blog...and once that was done, I/we worked on blog updates documenting our couple of weeks away. So that, along with our daily walks and chores around the RV kept us busy the first week.
Tuesday (Sept. 7) morning, I had a dental appointment...just a cleaning. It had been quite awhile. I decided to change dentists to one over here on the mainland. Steve hasn't made the move, so if we don't go south this winter, he will go to his dentist in Victoria, as I'm sure we will be making numerous trips over to the island for visits. I also met a cousin for a walk and coffee Tuesday afternoon. Great seeing Glenna and catching up!
The highlight of the week came Wednesday (Sept. 8) when Angela invited us over for dinner (she doesn't work Tuesdays and Wednesdays). Of course we headed into Coquitlam early so we could spend time with Isaac!
It took us extraordinarily long to get to their place...just heavy traffic...so Isaac and Angela were sitting on the front porch steps waiting for us when we arrived. Just love the big smile across his face when he sees us!
We brought gifts for Isaac from the Island...a puzzle, "Lightning McQueen"! When I saw it, I knew he'd love it...his bike helmet is also Lightning McQueen. Of course, that was the first thing he wanted to do! 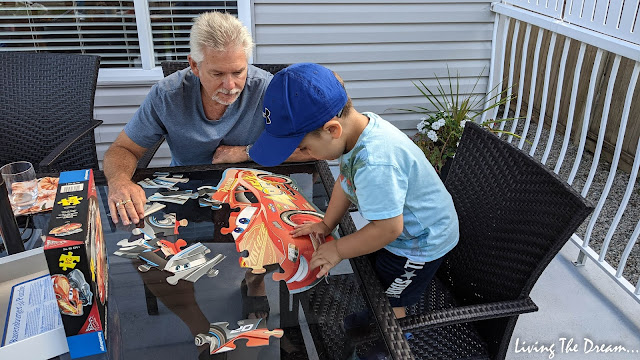 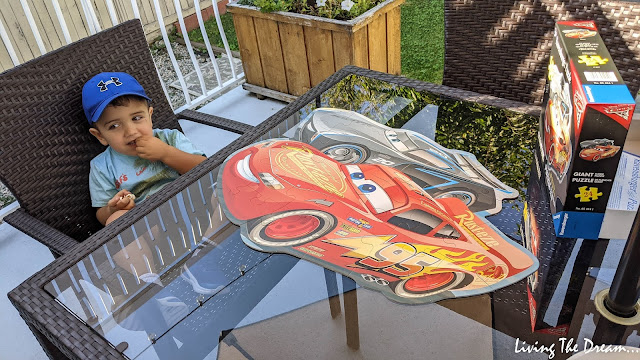 And a book...I don't know how many times I read the book to him! 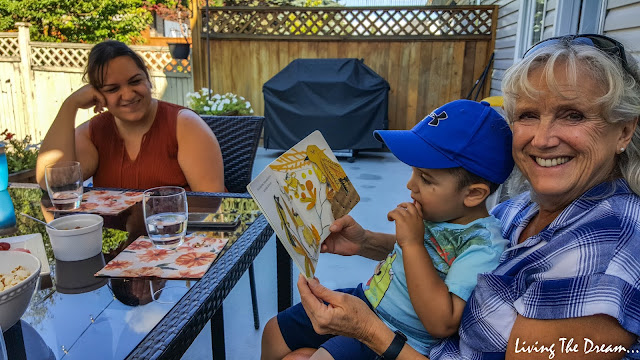 Then it was time to play with his water table.... 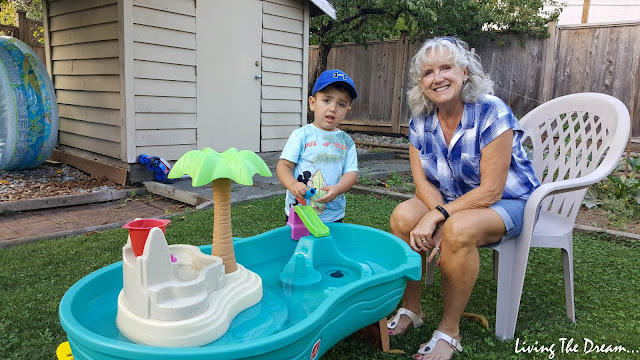 Chris left work a little early and was home just after 5:30. We enjoyed a delicious dinner out on the patio...take advantage of that while we can as fall is definitely on it's way!
We said goodnight at about 7:30...bedtime for Isaac anyway. Thanks for a lovely afternoon and evening, Angela and Chris!
Thursday (Sept. 9) was the first day of school for our grandsons in Victoria...Conner, starting Grade 3 and Bryce, Grade 1 (I actually had to confirm with Rob...I apparently lost a year somewhere, I thought they were in Grade 2 and Kindergarten! Yikes!). Thanks for the great picture, Angie! 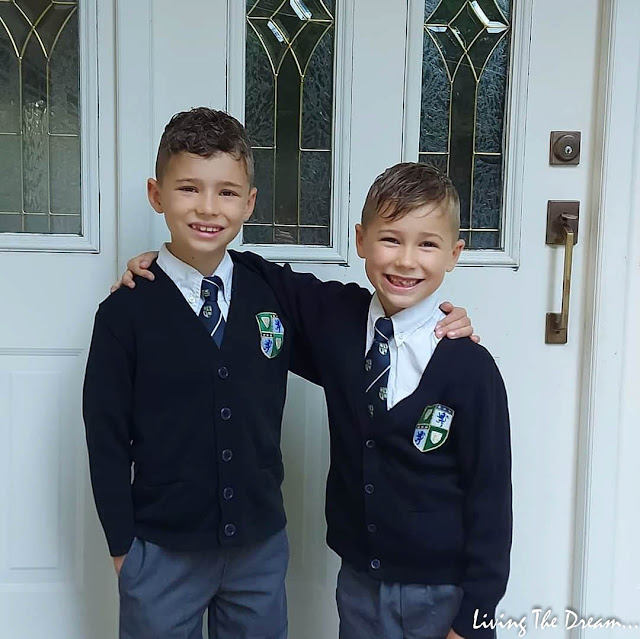 Friday (Sept. 10) we decided it was time to get the quads washed. So we drove Buster to a nearby car wash. Luckily, there was enough room to park and off load the ATV's. Steve spray washed them both first, then we each took a bucket and sponge and washed our own...and he finished off with a spray rinse... 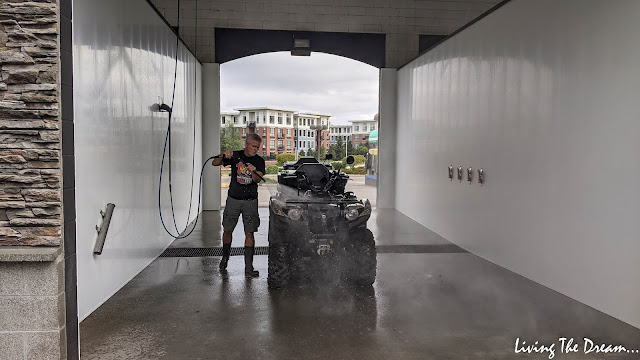 And back into the truck they go! 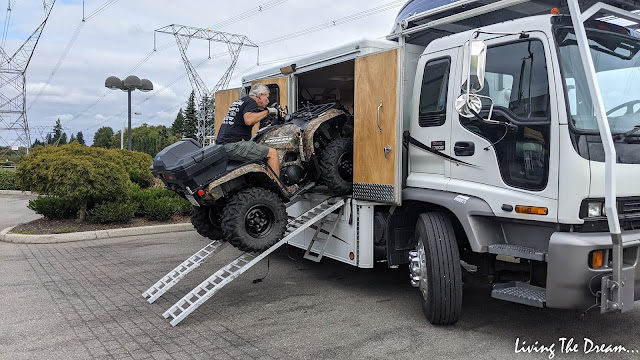 So we spent a lovely couple of hours doing that...but it's a chore we're glad to have done! Steve made an appointment to take them in for servicing the week after next.
Saturday (Sept. 11), we spent most of the day watch the CNN 9/11 special presentations on TV, and the remembrance ceremonies. Hard to believe it's been 20 years. Like most folks, we both remember where and what we were doing that fateful day so vividly.
Sunday (Sept. 12) morning Steve "put out" his back...no idea how but after his shower, he was hobbling around. It's been a long time since that has happened! Walking seems to help, so over the next week, in addition to our usual morning walk, we quite often got out for an extra one in the afternoon.
Chris, Angela and Isaac came out late afternoon for dinner. We managed to sit outside as long as we could but there is a definite coolness as the sun gets lower, so we headed inside. As we went in, Isaac said "I like this song" and began dancing! Steve took a short video...too cute!
A rather awkward selfie of us all about to have dinner... 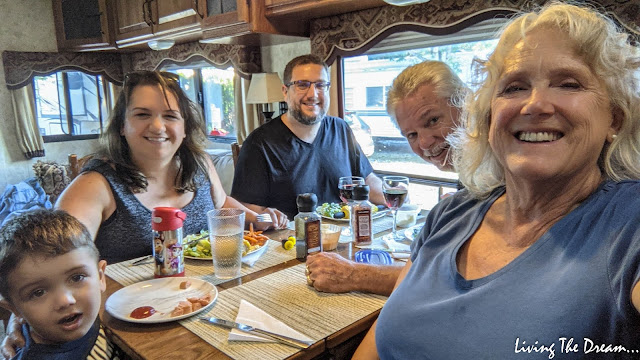 Monday (Sept. 13)...Salmon fishing in the rivers is really hot right now so Steve dug out his old neoprene chest waders he hasn't used in years to sell on FB Marketplace. We have never done this before but it was relatively painless. Next thing he knew, there were several fellows interested and they were sold! Hmmm...maybe $30 wasn't enough!  He also put a couple of backpacks that we don't use any more on Marketplace...they are really nice but just too big for what we need. Consequently, they have been hardly used. No interest in them...must be the wrong time of year! But at least the waders are gone! One less thing in the trailer basement!
Tuesday (Sept. 14) was cool and rainy...it was super socked in all day! We met a colleague from Steve's work days and her husband, Tracy and Colin, for lunch at John B Pub in Coquitlam for lunch. We spent a wonderful couple of hours enjoying the Burger and Beer special and catching up with them. Unfortunately by the time we thought of taking a picture we had a dirty table so didn't bother. As usual, great to see you both! Thanks for the small bedroom TV and the fresh herbs from your garden!
Tracy mentioned that Pacific Controls had moved into a new office in Burnaby, not far away (Steve worked in the Victoria office), so after lunch we drove there for a visit. At least there are still 2 people left that Steve knew...the owner, Mark (well, I guess ex-owner, as he recently sold the business), and Cindy, who besides purchasing, wears many hats. Cindy gave Steve a tour then later while he was speaking with Mark, Cindy gave me a quick tour around the new facility. It's been over 11 years since Steve has seen them.
Wednesday (Sept. 15), I left just after 10:00 for an annual dermatologist appointment in North Vancouver (could we have found one further away? Sheesh!). After checking me over, she decided to send a biopsy of a spot on my calf in for testing, and lightly free-off a spot on my nose. Otherwise all is good. She will call next week with the results of the biopsy but she really isn't expecting it to be cancerous.
I stopped at Costco for a little shopping on my way home...so I had a good day by myself. I think Steve did too...he walked, read and watched TV. Always good to have some alone time!
Thursday (Sept. 16) was an absolutely beautiful sunny day...just a little chilly to start at 6C/43F. There is a big rainstorm coming in tomorrow, the first major rain since last January! A rainfall and wind warning has been issued for the region.
So best to get out for a walk today at Crescent Beach. Wow! is the tide ever out! 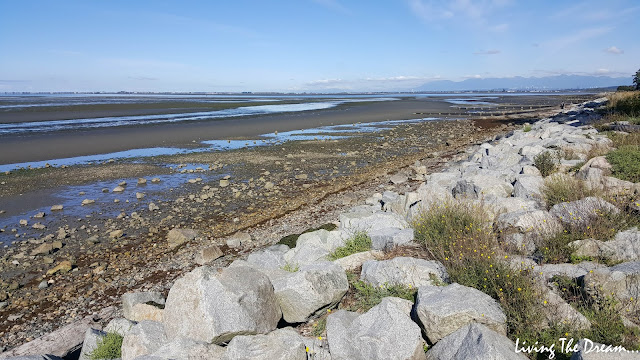 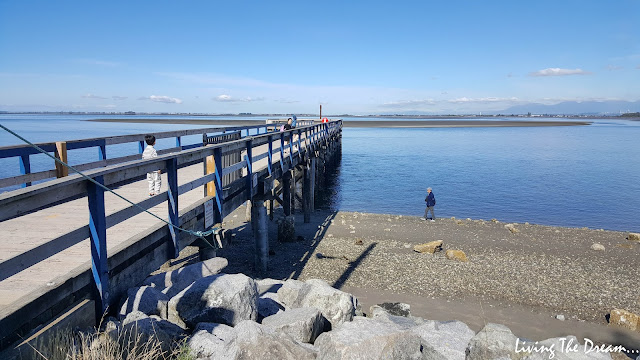 On our way home, we took a drive through White Rock...so pretty!

Friday (Sept. 17), we woke to the sound of rain on the roof...and it basically poured all day. They certainly got that forecast right! Consequently, it was pretty much an inside day, although I did go out to run a few errands.
Saturday (Sept. 18) and another appointment for me. My "knee doctor" comes over from Victoria every third Saturday each month to give his patients knee injections in the Vancouver area. My right knee (the one not replaced) has been really good but with the uncertainty of the US border opening, I wanted to at least get it checked and talk to him about it. Turns out, no injection needed today but he wants to see me again in January, or just before we go south, if in fact we are able to.
Sunday (Sept. 19) and a cloudy day. After our morning walk, we had a great video chat with Rob, Angie, Conner and Bryce. They are doing well, and the boys are enjoying being back at school.
We basically chilled for the rest of the day...Steve watching TV and I was working on this blog update. Chris invited us for dinner tonight, so we headed out just after 3:00.
Another lovely visit with them! A great feast of Chinese food for dinner and lots of Isaac time...priceless!
Monday (Sept. 20) morning while having breakfast, we got the bad news that President Biden is keeping the border closed at least until October 21st. Well that sucks! 70% of Canadians are currently fully vaccinated compared to 54% of Americans but they can come to Canada. Maybe it should have been a mutual border opening or nothing. And how is it safer crossing a border flying in a tube with a couple of hundred people breathing the same air, but not safe in your vehicle, when fully vaccinated...Geez!! We would normally be leaving in 2 to 3 weeks, but here we sit in limbo wondering... are we going south to the warmth of Arizona, or staying here in the rain (and snow?) for another winter?! 😠
Our morning walk was at Sunnyside Acres Urban Forest...a beautiful densely treed park. Other than laundry, that was pretty much our day.
And that brings us up-to-date once again!
Posted by Dianne and Steve