The last two weeks have slipped by, and again as I review my daily notes, it's been pretty routine...we're getting out for a lot of walks, along with all the regular chores.
Tuesday (Dec. 8) was a very rainy day. It was my turn for an appointment at the ophthalmologist in the morning. Like Steve's appointment, it was a very thorough exam, taking almost 2 hours. My eyes are good, other than being dry (I now have drops and a compress to warm up in the microwave and apply daily for 10 minutes). It's sure nice not having to wear contacts anymore but I definitely need readers!
After lunch, Steve headed off to a haircut appointment and I did some baking.
Wednesday (Dec. 9) started off cloudy but the sun came out in the afternoon so we drove into Victoria to meet Dave and Leslie for a walk. Dave's brother (where they are living for the winter) lives near UVic so it's very handy for walking the trails there. After walking most of the way, Margaret needed a lift... 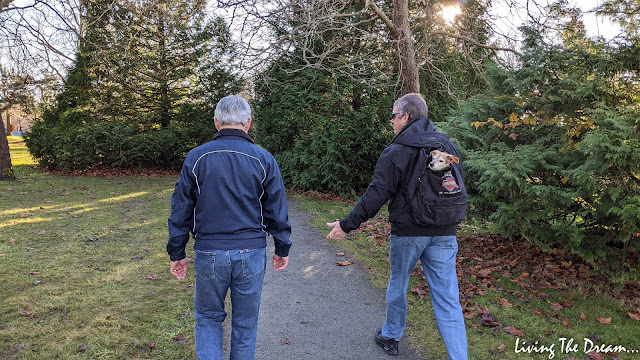 We were home shortly after 3:00, just in time to watch the BC Covid-19 update. The numbers are still increasing, so they have extended restrictions until January 8, which means no Christmas gathering with Rob, Angie and the boys, and we (again) have to cancel a planned trip over to Vancouver to visit Chris, Angela and Isaac. We're hoping for mid January now...as long as the restrictions are lifted.
Part of the Covid-19 update also included an update on the roll out of the vaccine...which was recently been approved by Health Canada. By the sound of it, I think Steve and I will be lucky if we get ours by late spring, early summer. Fingers-crossed!
Thursday (Dec. 10) and Friday (Dec. 11) were both fairly cloudy days with bits of sun popping out here and there. We got out for a walk along the Sidney waterfront both days. Other than that, it was chores...laundry, grocery shopping, dumping and flushing holding tanks, etc.
As we passed the Sidney Pier we noticed workers doing repairs... 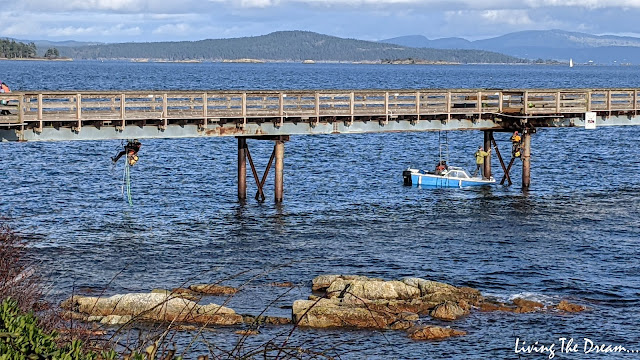 Saturday (Dec. 12) we had a mix of sun and cloud but it was also quite chilly out. Started out with a pretty sunrise...not like the ones in Arizona, but the best we could do here LOL. 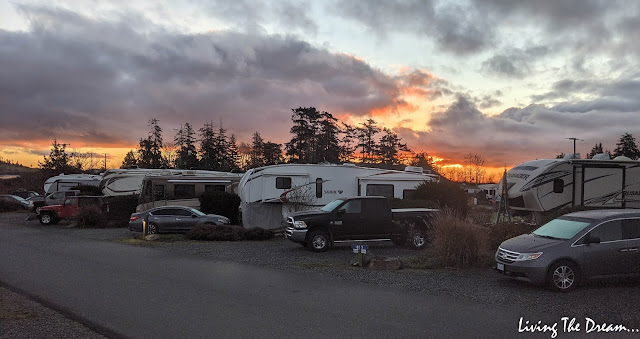 We drove into Victoria to drop Steve's bike off for a service and once home, we got out for a walk around the RV park. On the way back into Victoria to pick up the bike, we met Dave and Leslie for coffee at Starbucks in Broadmead. It was a little chilly sitting outside but it wasn't raining and it's nice to find outdoor spots to meet up where we can physically distance.
Sunday (Dec. 13) and major rain! But by the afternoon, it had eased and we managed a walk around the RV Park. Other than that, it was an inside day.
Monday (Dec. 14) morning I was up and out bright and early...shortly after 7:30! I wanted to take advantage of the senior shopping hour at Costco. It was a fabulous time to go and I was in and out in less than an hour. After a quick stop at Walmart, I was home by 10:30.
It was an absolutely beautiful day, so after I had all my groceries put away, we headed into Sidney for another walk along the waterfront.
You never see him without flowers in his hands but today there were a few additions... 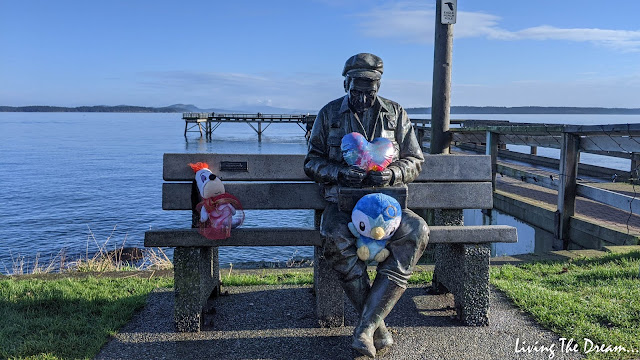 As soon as we got home we received a text from Dave and Leslie asking if we'd be interested in a walk...just had ours but we'll meet you for coffee after yours. So we met just after 3:00 at Fresh Cup Roastery in Saanichton, and enjoyed another physically distanced get together with them.
Tuesday (Dec. 15) and Wednesday (Dec. 16) were both rainy, windy days. Such a stark change from the weather yesterday! We managed to get out for walks around the RV Park, but other than that, both days were pretty much inside days. Steve worked on his winter project and I started another project...crocheting this time.
Thursday (Dec. 17) was a beautiful sunny day...so nice after the previous couple of days! We met our friend Nancy (Rob had a sore foot) at 10:30 at Tulista Park in Sidney for a walk on the waterfront. Afterwards, we met Rob for coffee at Fresh Cup Roastery. A great visit with them! 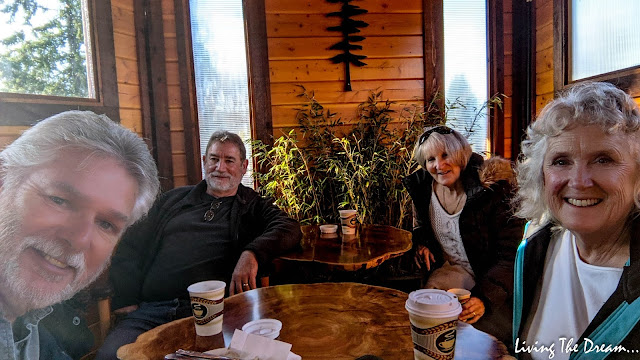 They had a Christmas tree made from driftwood... 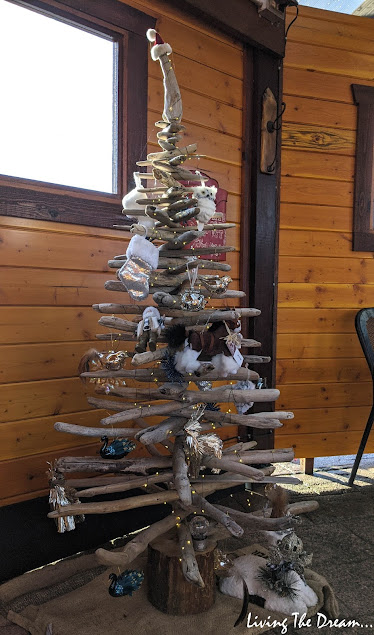 With it being such a beautiful day, Steve took a walk down to the beach here. They have eased restrictions, letting folks here in the RV Park access the beach now (Yay!) 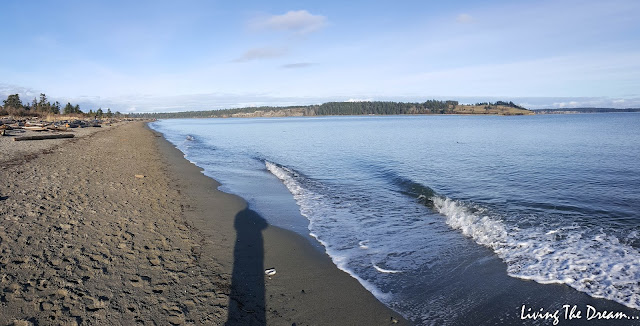 Steve saw something swimming towards the rocks... 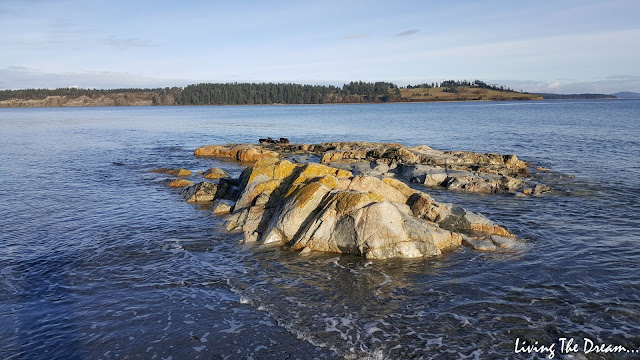 A family of Sea Otters... 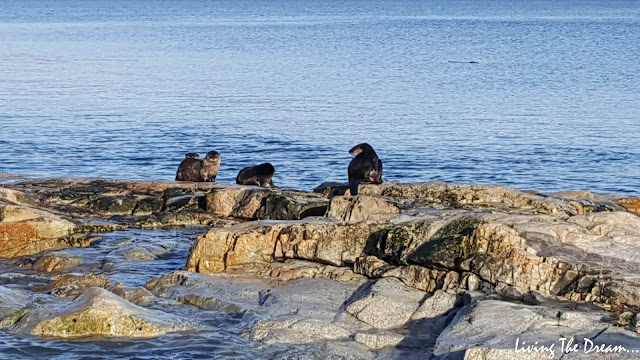 Steve took a couple videos...so fun to watch them! 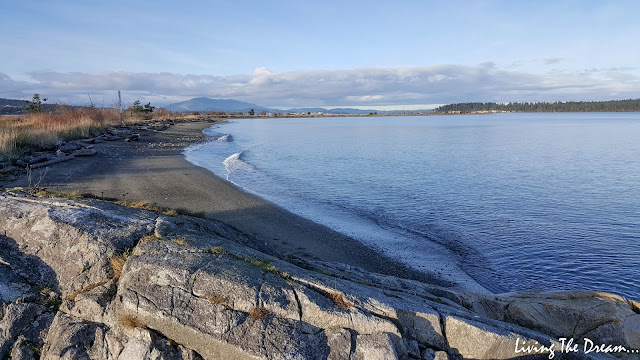 Friday (Dec. 18) morning we woke to the sound of rain on the roof. Another storm is coming through today with wind and rain....and they weren't kidding! A very stormy day!
Consequently, it was a pretty uneventful day. I went through the contents of our safety deposit box that I had picked up the other day and also did a couple of loads of laundry. Steve worked on his winter project and watched "his shows" on Netflix.
At 4:00 we join in on a Zoom Happy Hour that Earl had organized with our Canadian Quartzsite folks. We enjoyed over an hour of chatting with Earl and Allison (top left), Cec and Jim (bottom left) and Bob and Sue. They claim they couldn't get their camera to work but Steve thinks they were naked...LOL! 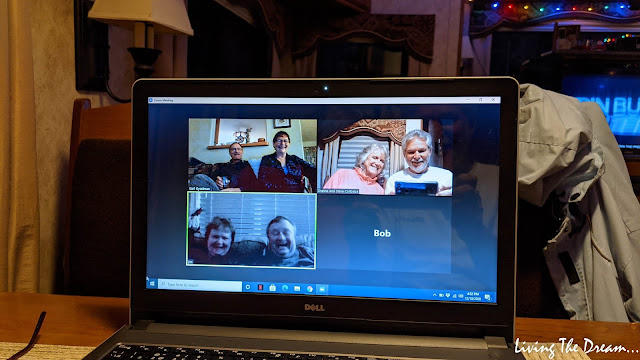 Saturday (Dec. 19) started out cloudy and then the rain set in late morning...along with more wind. Luckily, we got out for a couple of laps around the RV Park during a break in the rain. After lunch we decided to go out for a drive (yes, in the rain)...just to get out of the trailer for a bit. By late afternoon, the rain was pounding down. A pretty yucky day weather-wise!
Sunday (Dec. 20) morning, with beach access now open, we decided to walk the beach. We walked down to the border of Island View Beach Regional Park and turned back. It looked like rain was heading our way... 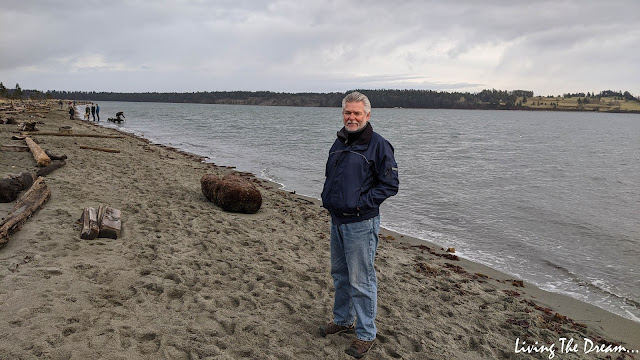 It did rain a bit but it really didn't amount to much. We took the bikes out for a ride around the RV Park and nearly froze our butts off! So other than those outings, it was an inside day. We did have our weekly FaceTime call with Chris, Angela and Isaac...as always, wonderful seeing and chatting with them! So glad we are able to stay in touch virtually!
Monday (Dec. 21) morning we woke to the sound of heavy rain on the roof. It was just pouring! And a couple of hours later, we started noticing some white stuff mixed in...next thing we knew, we had huge fluffy snow flakes coming down! How appropriate for the first day of winter! 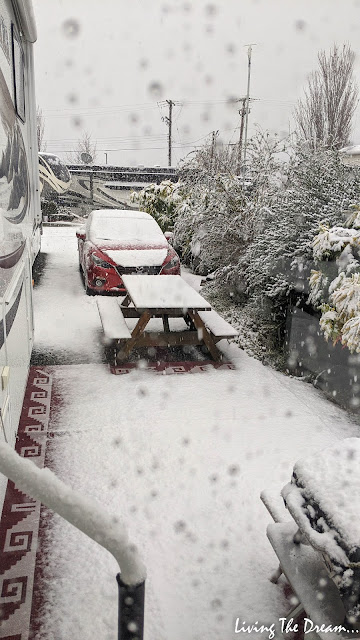 A couple of short videos showing our winter wonderland!
At 12:40 p.m. the unthinkable happened...the power went out! Our hopes that it would be back on in a few minutes were dashed as the hours went by. It got pretty cold inside the trailer, so Steve decided to get our propane heater set up. He could have turned the furnace on but it would drain the batteries pretty darned quick. We've learned a lot about power management while boondocking over the years.
Eventually the snow had turned to light rain by late afternoon then stopped. But by 4:00 with no sign of the power being restored, it was time to bring out the generator...we're truly boondocking just like we're in Quartzite, using the generator and propane heater!
At 9:00 we decided to turn everything off, go to bed and watch the little 12 VDC TV and powered our receiver with our plug in 12VDC/120V inverter. Steve had plugged the trailer back into shore power when he turned the generator off...hopefully the power is restored by the time we get up in the morning!
Tuesday (Dec. 22)...and we have power! It wasn't on at 1:30 a.m. when I was up briefly but Steve announced it was on when he was up at 3:30. We later learned from a neighbour that it was restored at 2:30 a.m., an outage of about 14 hours. So glad Steve had decided to plug back into shore power last night! Apparently over 83,000 were without power on Vancouver Island, and the Gulf Islands and for many they won't have power back until tomorrow so we were lucky.
We have clear, blue sky today...but it was cold! 0C (32F) first thing (with the "feels like" value even colder!). So those slushy roads after the snow and rain yesterday are going to be like skating rinks until it warms up!
By late morning, Steve and I thought we'd get out for a walk on the beach. Unfortunately, we were greeted with this sign at the spot where everyone crosses onto a road that goes to the beach (it's the "unofficial" crossing that everyone uses).... 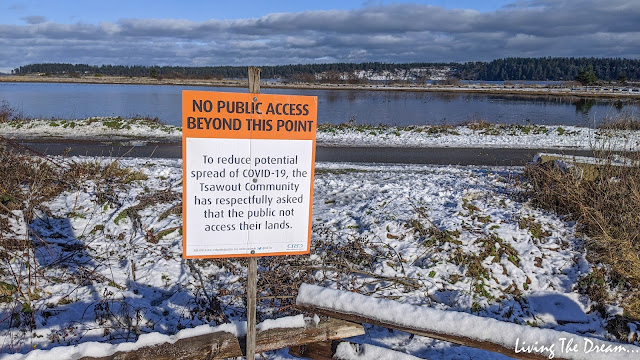 Well, okay, then...we'll try the "official" trail from the RV park to the beach. Once there, and as expected, it was basically not passible. So the beach is open for those in the RV Park but you have to use the "official" beach access path which is so flooded, muddy and boggy that you can't get through...grrrr.
The official beach trail is behind me, across the foot bridge, to the left... 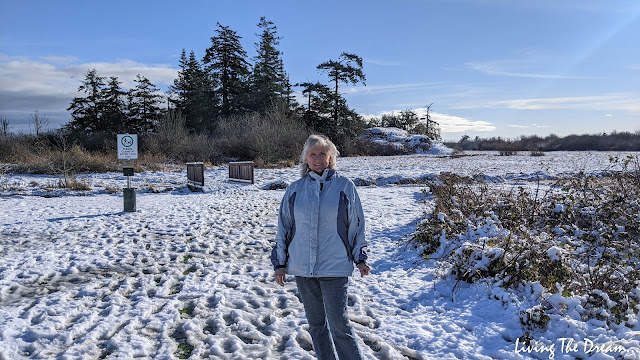 So we continued our walk around the RV Park. As you can see from the road, it was a rather slow, careful walk...no powerwalk today! See Buster down the road on the right?