Saturday morning Dale and Ruth (long time RV-Dreams friends) picked us up at 10:15 and we headed off to Lake Havasu. Today is Ruth's birthday and since it had been mine a few days ago, they invited us to join them in a birthday lunch celebration. 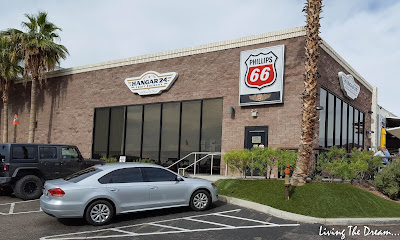 We arrived at Hanger 24 Brewery and Grill at the airport a few minutes after 12 noon. The parking lot was full with mostly side by sides so Dale dropped us off and parked below in the overflow parking lot.

It is a line-up, order beer and food type of place and then they deliver the food to your table. We grabbed some menus and sat down at one of the picnic tables so that we could peruse it. Glad we could do that because I hate standing and looking at a chalkboard trying to decide...especially if there is a line up behind me. And just as we decided and Dale and Steve had gone up to order, another huge group of off-roaders came in...good timing!

With drinks in hand, we waited at the table for our food to arrive... 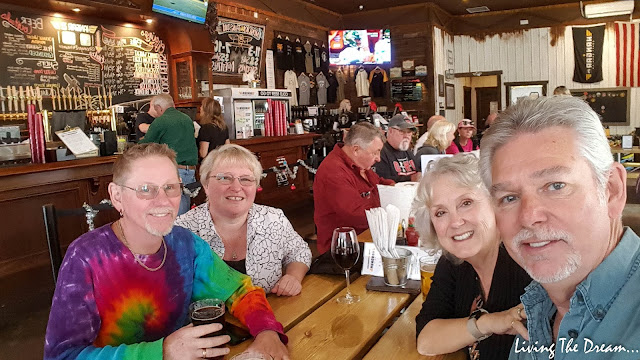 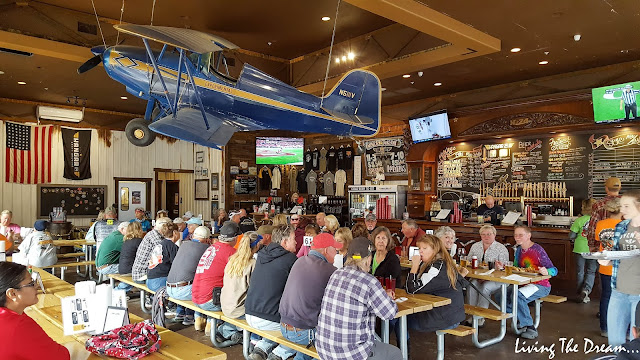 The food was good, the beer was good and the company was excellent...thanks, Ruth and Dale for including us in your celebration today!

As we arrived at the overflow parking lot, we found it almost full of 4-wheelers on both sides! Apparently when Dale parked, there were only a couple of vehicles...guess these belong to the big group that arrived shortly after we got there... 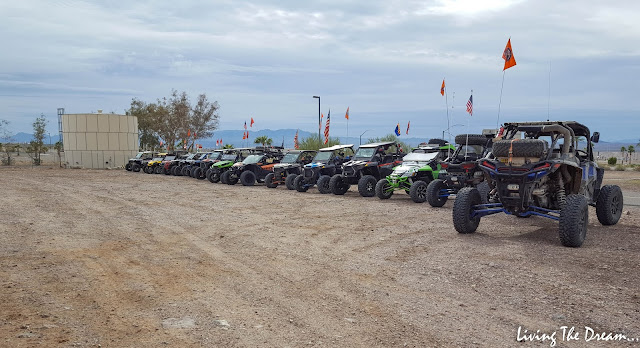 After a stop at Smith's to pick up a few groceries, we were on our way back to Quartzsite. Thanks for a wonderful day, Dale and Ruth!

Sunday (Dec. 8) morning Steve worked on taking clips from the Go Pro camera video of our ride last Friday.  For some reason, the download did not go as smoothly as usual...the date in the Go Pro had gone wonky as we hadn't used it since last June.  The software also needed an update...so that could have been the problem too.

We had some ground fog come in this morning...it's been very humid here so far. I don't like it...where is the dry Arizona air?! 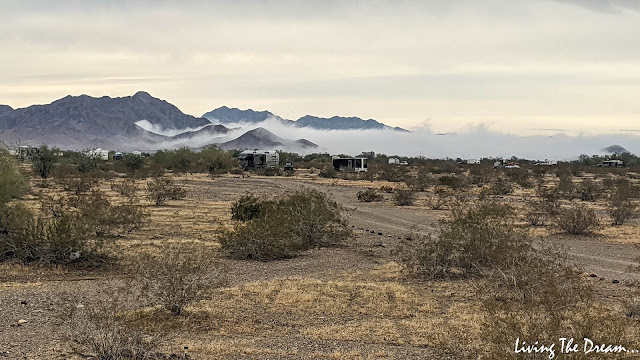 While Steve was working on the laptop, I put up our Christmas trees, solar Santa and decorations...there, now it looks like the Season! 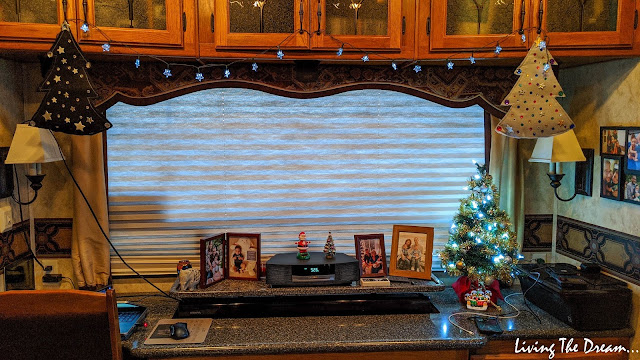 I had gathered all of the laundry and it was ready to go, so shortly after noon Steve loaded it into the truck...and then went to start Buster. It fired up and immediately died...and wouldn't start again. Now what is this all about?! He left it for 5 minutes and tried again...this time pumping the accelerator to try to keep the engine running. It worked. It's acting like it's starving for fuel...he had this problem last year and it turned out to be the fuel filter. We just had the truck serviced before heading south so whats up with that!?

Thank goodness he got the truck running because I had a lot of laundry to do including all of the bedding. We arrived at the laundromat at 1:00...Steve helped me take the 4 bags of laundry in and then went to fill up our drinking water barrels. I had all the laundry in the washers and wandered outside as I waited, and saw a "Closed" sign had been put up at the entrance. It hadn't dawned on me that it was Sunday and the laundromat closes at 2:00! Anyway, by the time the washers were done, I only had 20 minutes for the dryers. At least we managed to get the flannel sheets (by sneaking in an extra 6 minutes on high!) and duvet cover dried. Some of the things in the rest of the dryers were fairly dry and some was still damp...so when we got home, I made up the bed and then had damp things hanging all over the inside of the trailer. We did hang some things outside on the awning but it wasn't sunny...or all that warm, so they didn't dry. Oh well...lesson learned! Funny because we would normally go first thing in the morning, just use the washers and then take it home to hang on the clothesline. Putting up the clothesline is next on Steve's "honey do" list!

Monday (Dec. 9) was a beautiful day...lots of blue sky and sunshine! Yay! Unfortunately, I spent a good part of the day inside working on the laptop...mainly a blog update. Work, work, work...LOL!

Steve and Earl moved a fire pit from near our trailer to a spot further out...this will be a "communal" fire pit for anyone in our group to use. Colin and Marilyn are parked down that way and we are expecting at least 4 or 5 rigs coming in at various times. The fire pit should be right in the middle of us all.

After I had finished with the laptop, it was Steve's turn to take it over to work on more picture editing. I pre-made dinner so that I could just pop it into the oven! That worked well...I had dinner made and all the dishes done! So all I'd have to do is pop it into the oven a half hour before it was time to eat.

So nice having sun for our happy hour tonight! 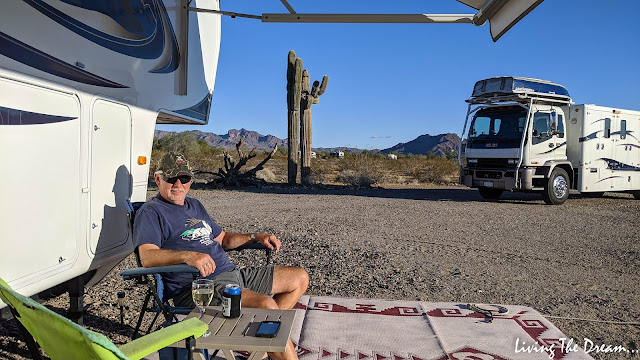 View to the east as the sun sets... 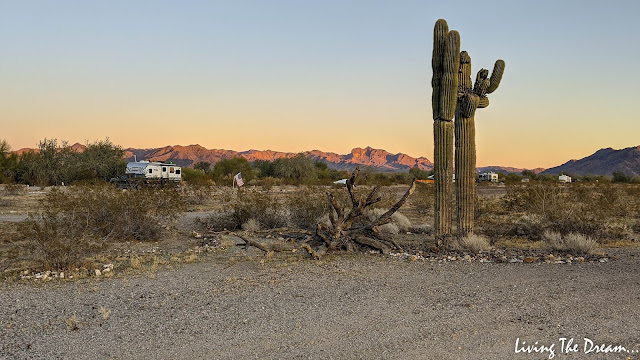 View to the west...Colin and Marilyn had joined us... 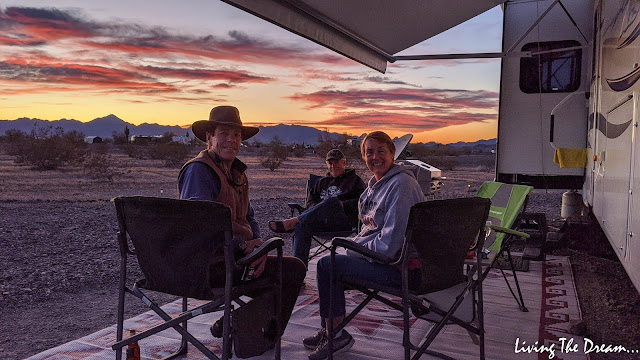 At 7:00, Earl and Allison came over for the first of many Rummikub nights! The pros both won 2 to 3 games each...but Steve and I managed to hold our own by each winning one game! 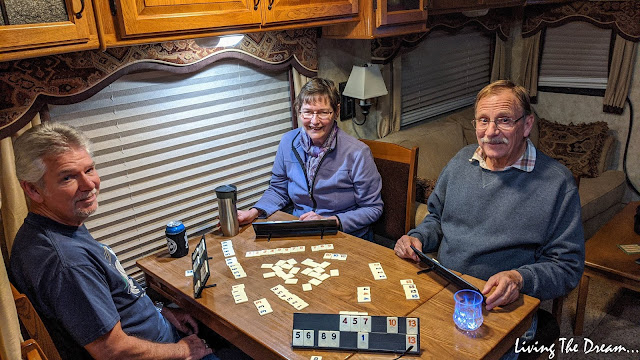 Tuesday (Dec. 10) morning after our usual start to the day, we did our resistance exercises...I also pedalled for 20 minutes and then went on a 1.33 mile walk. Guess that was too much for my knee...I paid for it the rest of the day! Steve keeps saying "baby steps", take it slow...I'm obviously having difficulty with that concept!

After finding out from our neighbour, Art, who has a big tractor that he tows his fifth-wheel with, where he takes it for servicing, we headed off into town. Steve wanted to get the fault codes read that happened in Canyonville, OR on our way down.

We had no problem finding Best Auto RV and Truck Repair...I sat in the truck while Steve went in. A little while later he came out with a fellow carrying a laptop...it was the device he will plug the truck into to read the fault codes. The tech wasn't able to find any fault codes or "hard" fault codes which would have remained if there was a serious issue. That's good but it still would have been nice to know what caused the engine light to stay on for a period of time. The tech also agreed that my starting issue sounded like a fuel filter issue so if the problem continues he'll order in a replacement. And bonus... they didn't charge us for the fault code test!

After filling up with propane and gas, we went to buy some firewood from where we've always bought it before for $6 a box but they were out. We notice another couple of places that sold it so went to one of them. Holy crap...they wanted $12 for a box of pine, $15 for juniper, and $25 for oak!!! So we left empty handed and went home.

Wednesday (Dec. 11) morning, Steve headed out with Earl to the Quartzsite Desert Flyers RC Club meeting, then did a quick visit to the RC flying field. This fellow was pretty good with his helicopter which are much harder to fly than the planes... 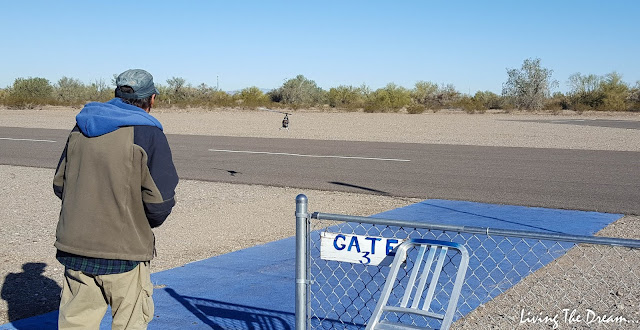 While he was gone, I did a mountain of dishes and took care of a bunch of odds and ends on the laptop. Unfortunately, the internet here sucks...already! Just wait until next month...yikes!

When they got back, Steve and Earl went out to do a little flying themselves as it was such a beautiful calm morning. 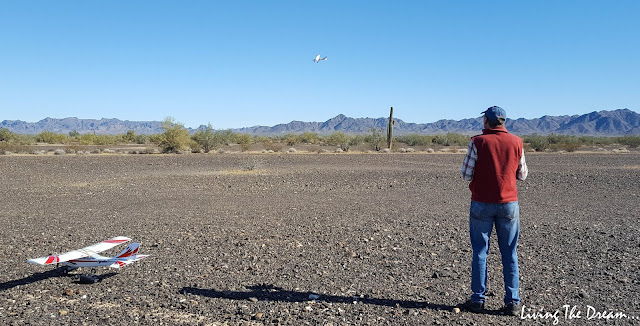 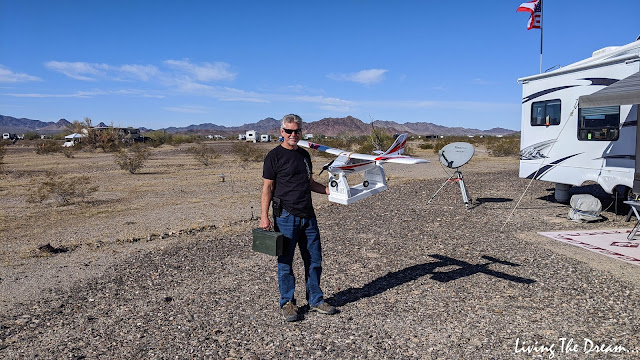 At 1:00 we headed out on our  quads, along with Earl, to pick up Dino and Lisa...we are going to take them out on a little tour of the area. The last time they were here was 3 years ago and I don't think they really saw a lot of the area...at least not by 4-wheeler! 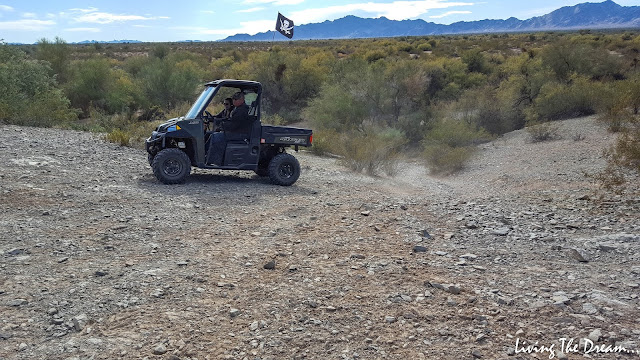 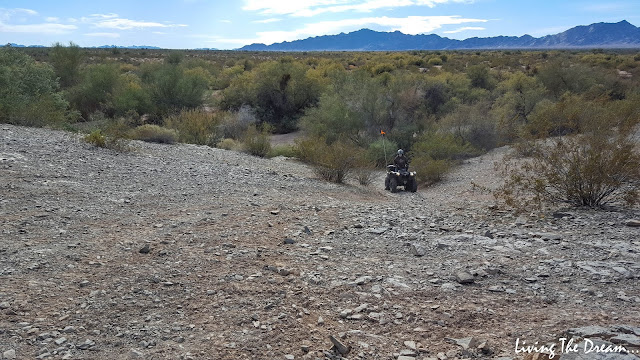 We took them to see the Indian grinding holes... 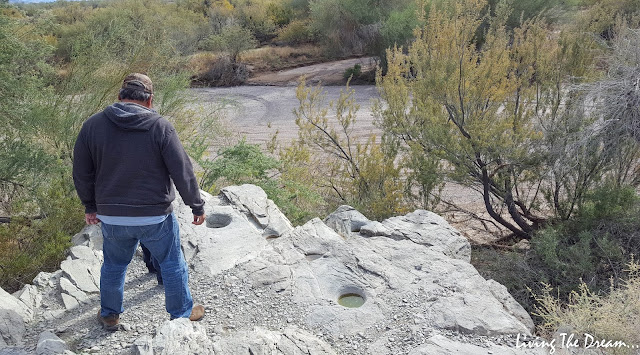 ...and the old mine and Petroglyphs at the hill across the wash... 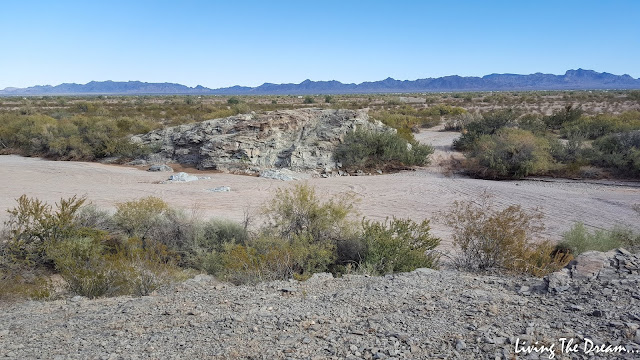 Gold Eye Mine cabin, then a couple more old stone cabins as we made our way to... 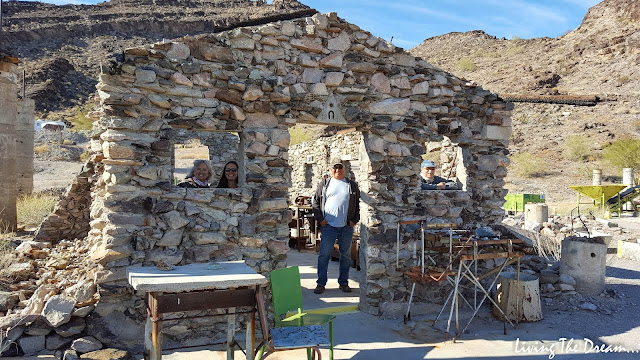 ...where else... Beer Belly's Adult Daycare! 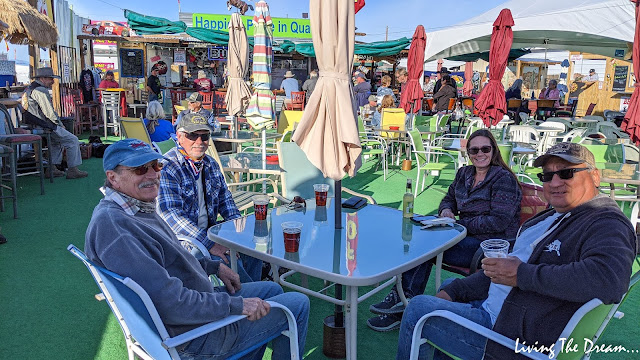 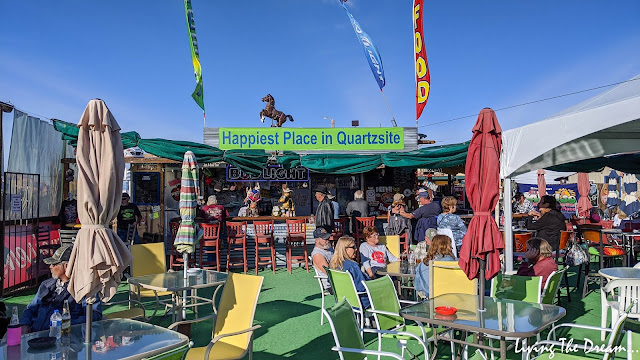 Thursday (Dec. 12) was a beautiful sunny day...but pretty boring when it comes to blogging about LOL!

Just after 9:00 Steve headed out with Earl to the area on the other side of the wash (north) to fly their RC planes. While they were gone, I baked muffins and then did some work on the blog.

They had a good time flying. The only mishap was a torn off nose wheel on Earls plane. Luckily he has the replacement parts on hand.

When they got back, Steve went over to Earl's to work on their planes...okay, enough fun stuff, it's time to "pump and dump" the trailer holding tanks! Steve did that while I did some housecleaning and then sat outside in the sunshine for a little crocheting. 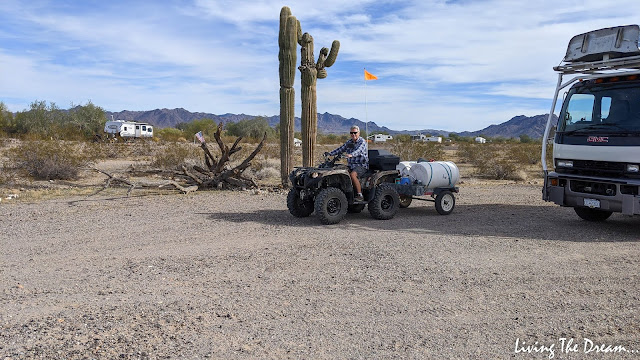 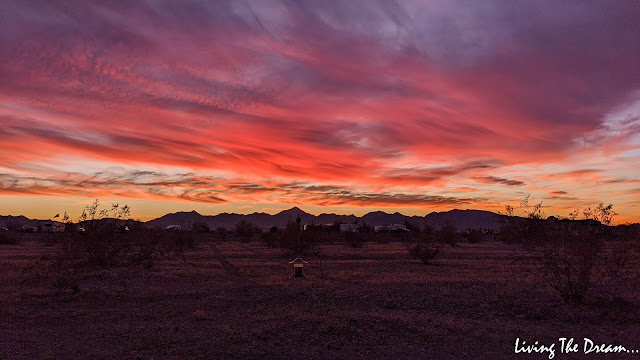