OMG...so many days have just slipped by! Although we are stationary, and not doing much (other than daily walks and bike rides)...it's still time to do an update.
Friday was a rainy, rainy day. I took advantage of still having Chris's car to go grocery shopping and then we headed into Vancouver to pick up the inverter at Pacific Yacht Systems. Apparently the inverter tested out fine other than it was stuck in standby mode.
Saturday (June 13) was a dry day, thank goodness...we got out for our morning power walk and then Steve washed and vacuumed Chris's car. While he was doing that, I made muffins.
Voila...all spic and span! This is one of the cars on our shortlist...a 2012 or newer Mazda 3 GS Sky hatchback. The other is a 2013 or newer Honda Civic coupe. Unfortunately, we haven't been able to talk Chris into selling it to us LOL! Very low mileage with only 60,000 kms (or just over 37,000 miles) 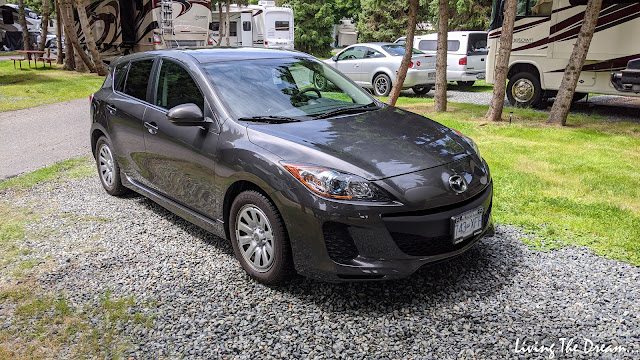 Sadly, we had to return it today. I took off about 20 minutes before Steve did, so that I could get fuel and be at Chris and Angela's...and parked in the garage...before Steve got there with Buster (which takes up the whole driveway!).
We had a fun afternoon playing with Isaac (and visiting Chris and Angela)... 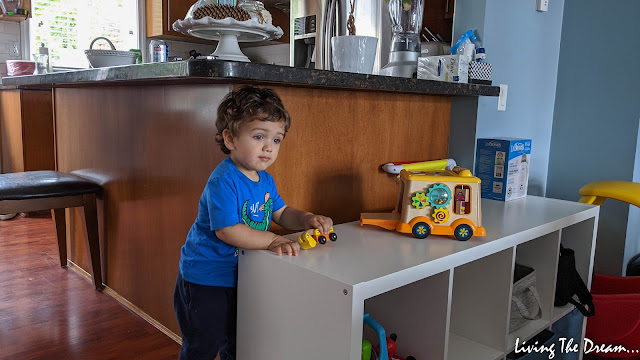 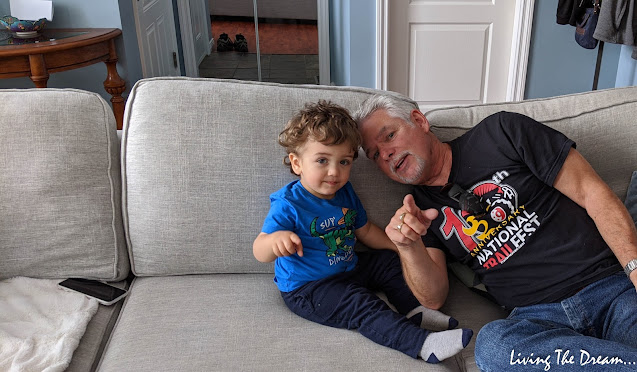 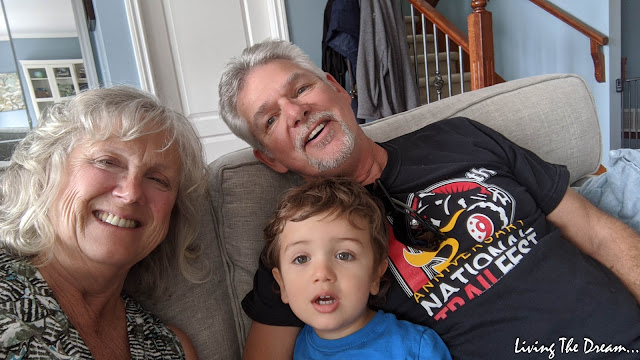 Isaac thought this basket was a fun hat after Grampa placed it there... 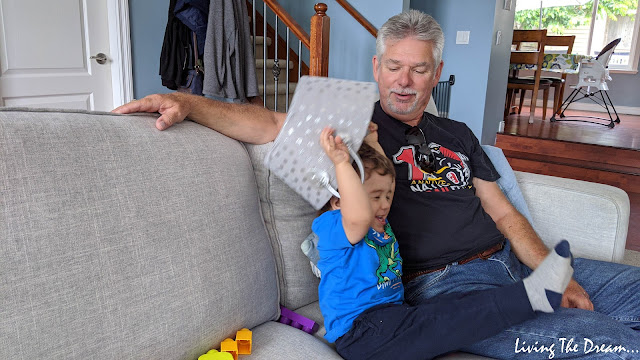 We ordered in...and enjoyed a great feast of Chinese food! We don't have it very often but always enjoy it. Before we knew it, it was time to head home. Thanks for a great afternoon...and the use of your car, Chris and Angela!
Sunday and Monday (June 13 and 14) were cloudy, cool days for the most part, especially Monday. It started raining just after we got up and rained all day...an inside day, for sure!  So we didn't do much other than watch TV, research cars and read.
We were greeted with sunshine Tuesday (June 16) morning...still some cloud hanging around but it was great to see the sun!
Steve remounted the inverter in the trailer so it's ready for Paul's Mobile RV Service to hook it back up. 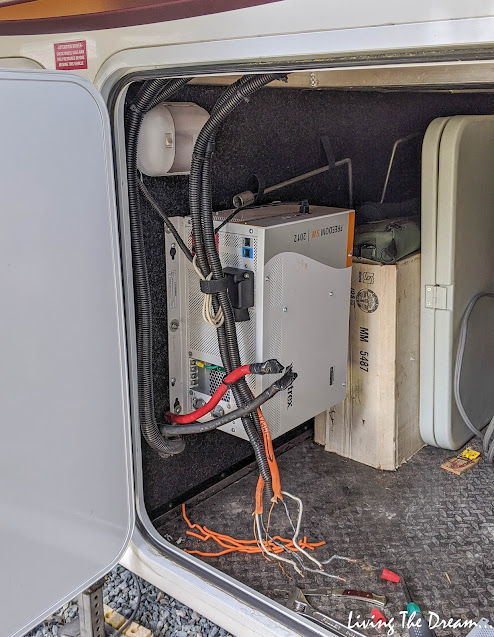 We decided to drive out to Langley to look at a car...a Mazda 3. We took it for a test drive...it ran fine but it was the first car that we looked at, so we weren't going to jump into anything right away. Cosmetically it had no dents but lots of scratches and marks in the paint so neither one of us were particularly enthused with it.
Before heading home, we decided to stop at Krank'd Car Audio. Our stereo stopped working a few  weeks ago so Steve wanted to get it looked at. I guess he is tired of listening to me sing...LOL! He didn't expect to have it looked at right away but next thing we knew, the fellow determined that our 9 year old Kenwood Stereo had bit the biscuit...and was installing a new one. Yay...tunes again!
Wednesday and Thursday (June 17 and 18) were beautiful warm sunny days. We found a car that was just listed online that interested us but when we contacted the dealer, someone else was out on a test drive. She ended up putting an offer on it but had trouble with the financing...so a few days were spent with a lot of text messages going back and forth between us and the dealer. Basically "the auto financing didn't go through, so it may be available...we'll know tomorrow". To make a long story short, after finally getting more info to the bank, she was approved...then, she decided the interest rate was too high and wanted to have the weekend to think about it. She was told by the manager that she had one hour...end result, she took it.
Friday (June 19) was another beautiful day...with quite a bit of high cloud. We thought we'd go back for a walk we did a few weeks ago at Blackie's Spit...a nice change from just walking around the campground.
Lots of beautiful wild flowers along the path... 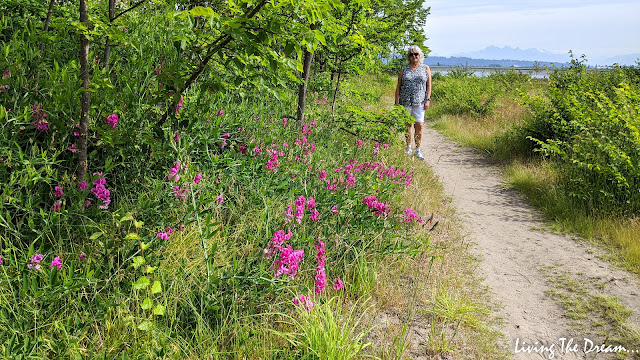 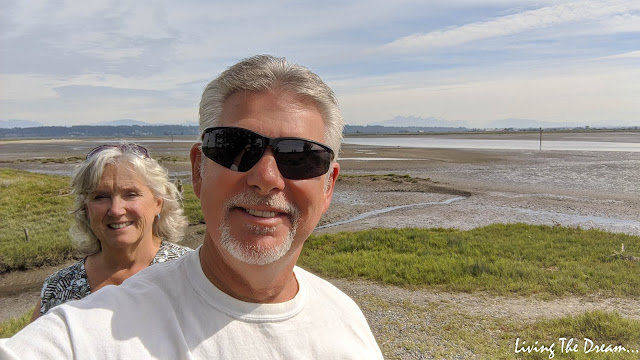 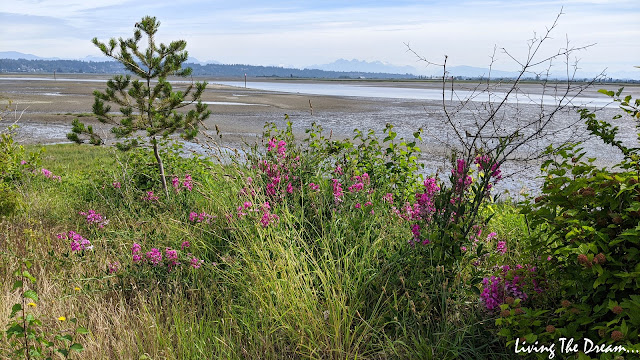 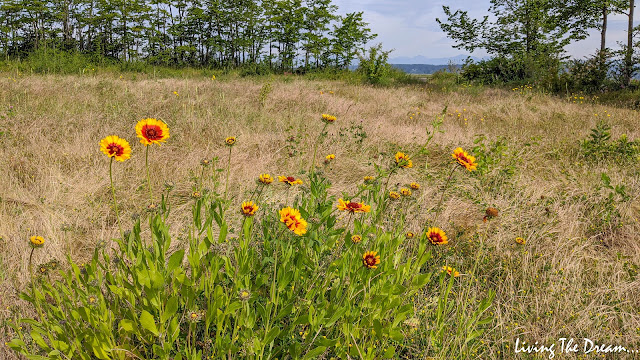 Another fabulous walk in a gorgeous area!
The rain started just after dinner but it was so warm out that we had all of the windows and the door open. I even sat outside under the awning listening to the rain for awhile just before going to bed.
It rained on and off all day Saturday (June 20), but it was still really warm. During a brief break in the rain, we thought we'd get out for a walk. We didn't make it back before the rain started again...luckily (for me) Steve had taken his umbrella and shared it with me.
Chris, Angela and Isaac arrived just after 3:30...for a pre-Father's Day visit. Steve's eyes lit up when he saw the chocolate cake Angela had made him!
It was too wet to go outside, so we had an inside visit...again, all of the windows and door were wide open! 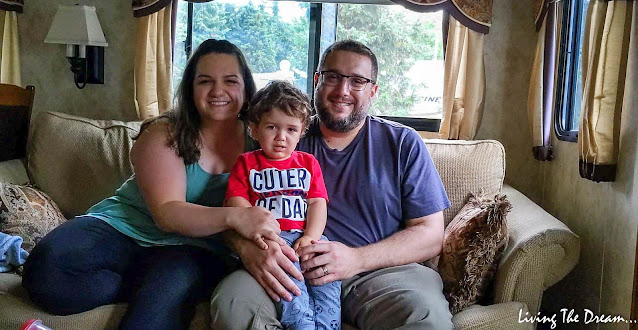 Gramma brought out some "toys" for Isaac to play with. He knows his colours...handing Grampa the purple one! 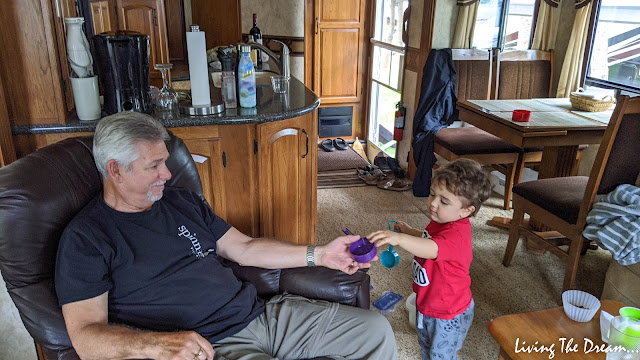 Isaac having his dinner just before the rest of us... 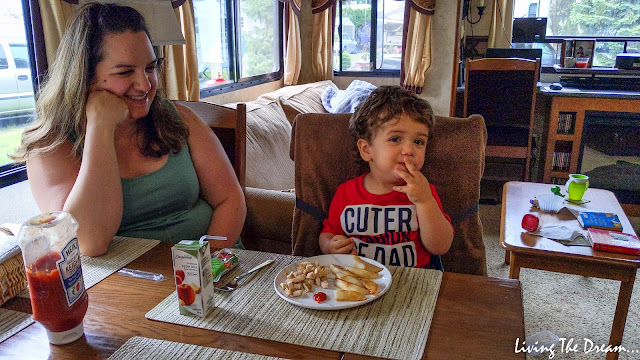 After a great visit, we walked them back to their car...it was just before 8:00 and a good way to put Isaac to sleep for the night!
Sunday (June 21)...and Happy Father's Day to all the wonderful Dads out there! We had a cloudy start to the day, so Steve finished up his "song" project...he whittled the 5,000 +/- songs on our old laptop down to 1766! I transferred them all over to a memory stick to play in the truck (the new stereo has  USB port) but the stick is obviously the wrong type to play music, so I will have to get one that will.
We got out for our usual walk around the campground in the morning...and then about 2:00 the clouds parted giving way for some sunshine. We finished the afternoon off with a bike ride.
Monday (June 22) was another beautiful day. Again, rather than walking around the campground, we decided to drive to Blackie Spit and this time walk Crescent Beach. I took a few pictures to show what a beautiful day it was and how far the tide had gone out but for some reason they disappeared off my phone...don't know what happened but they were taking a long time to "process" so I thought it would be a good idea to restart my phone. Bad idea...poof! they were gone!
Other than that, we had a pretty chill day...a lot of car research! There's not much out there in our price range right now. Maybe COVID-19 has slowed down car sales and trade ins. We really don't require a car until the fall but it would sure be nice to get something sooner. With the 2021 model year coming out in the fall there should be more people selling or trading in.
Tuesday (June 23) morning we had a rental car to pick up, so we headed off at about 9:00. We managed to rent a car for 2 weeks for only $257...a pretty good deal, I thought! We seem to get the best deals going through Costco.
We ended up with a cute little Kia Rio...a small car but with plenty of get up and go! Back home, we chilled for a bit and then I headed off to a medical clinic at UBC (University of BC) where my orthopaedic surgeon holds an injection clinic every other Tuesday. I hadn't been able to get an appointment over in Victoria so this worked out great! It has been years since I have been to UBC and OMG...has it ever grown!
I got the injection (Cingal) in my right knee (it should be good for 6 months, I hope!), picked up a couple of things as the Save-on-Food adjacent to the clinic and headed home. A great few hours out by myself!
Shortly after 4 pm Paul's Mobile RV showed up to rewire our inverter. It powered up and seems to be functioning just fine. He was dumbfounded to as to why we couldn't get it working before.
Tomorrow we head back over to Vancouver Island for more appointments and visits!
This week BC went into Phase 3. Phase 4 will not happen until a vaccine is available.
Stay safe and healthy everyone!
Posted by Dianne and Steve at 4:26 PM