It's a weekend here at Fort Camping and as usual we watched all the families arrive for the weekend yesterday afternoon....a gorgeous, hot weather forecast is in store, so nice after all of the rain the area has experienced over the winter and spring. Actually, we're in for a stretch of nice, warm weather...according to the weather forecast.

After our usual early...but slow...start to the day, we headed off mid morning into Langley. On our trip back to BC the over-the-air Winegard Batwing TV antenna stopped winding up unless Steve went up onto the roof to lift it, then it would catch as I was winding it up. Steve thinks it was a stripped elevating gear so he wanted to go to Traveland to pick up a part for it. He was pleased to see that they had stock and he wouldn't have to replace the whole thing.

Jack (the fellow we met in Quartzsite and again at Peach Arch RV Park) was working today, so we had a chat with him and he introduced us to a couple of his colleagues. After spending a little time with him, Steve picked up the part, a replacement lock for the truck air filter access door along with an anode for the hot water tank, and then we headed over to Walmart. I picked up a few things and we were soon on our way home.

Steve got right to work on fixing the antenna while I baked some mini-muffins. It was an easy fix as all he had to do was manually raise the antenna after removing a couple of pins and the elevating gear came right out. He also applied some silicone spray as per the directions in the installation manual. 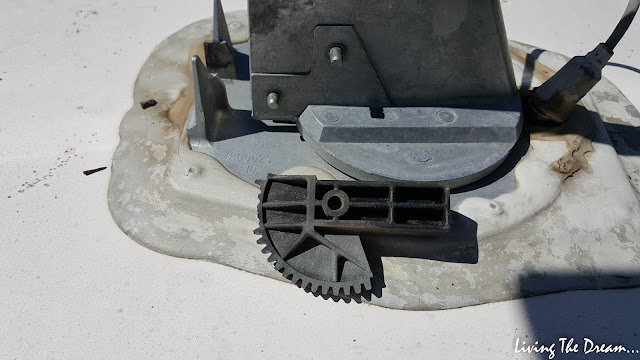 Once all the work was done, we went for a nice bike ride on Tavistock trail...there are signs all along the path warning about the flood hazards due to the high river. We even found the final stretch of the trail that goes down to the Travistock Point closed. We were able to do the loop, though, that goes along the north side of the island... 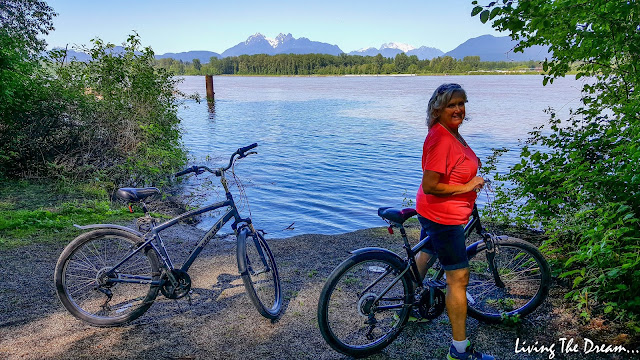 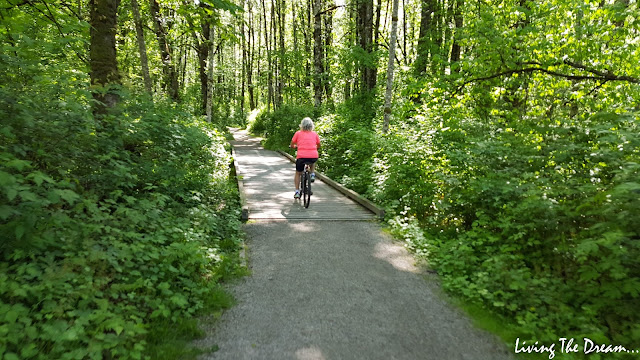 It was a hot day today, so the shade along the path was welcomed...as was the shade back at camp where we relaxed with a Saturday night beverage!

Sunday...and Mother's Day! And I had a wonderful day! It started off with a little work in the morning. I realized that we are going back over to Victoria tomorrow and I needed to do laundry before we go, so I did that while Steve washed the dishes and cleaned up the kitchen.

I received a "Happy Mother's Day" text from our son, Rob...looking forward to seeing the family over on Vancouver Island tomorrow afternoon! Chris, our son here, also sent a text...but we will see him and Angela a little later this morning as they are coming out to take us for a Mother's/Father's Day lunch.

They arrived around 11:00, we sat outside until it was time to walk into town and The Fort Pub (can you tell it is our favourite spot?) where Chris had made reservations for us. Sure glad he did as there was a line up at the door waiting for tables. 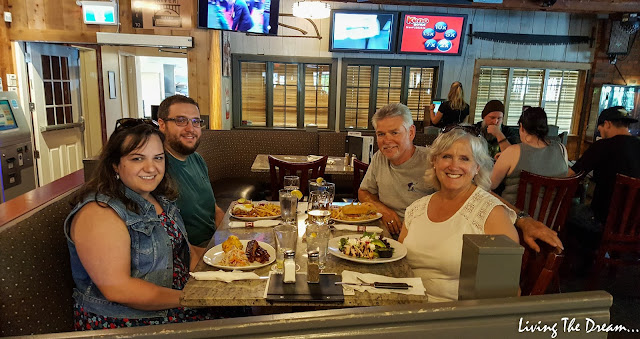 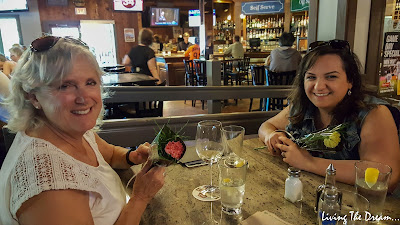 And when the bill came, both Angela and I were given a beautiful carnation...apparently they were giving all ladies flowers today. So nice!

After lunch we wandered back to the campground and sat outside visiting for another couple of hours. So nice spending time with you both! But it was time for them to head back into the city and visit Angela's mom and grandmother. Thank you for lunch and the lovely card!

It was the hottest day yet at 30C/86F...so we closed up all of windows in the trailer and got the AC going. I sat in there for awhile working on a blog update and then joined Steve outside with a 3bevie outside in the shade.