We’ve been here a week now and just as I thought, it has been filled with “truck stuff” along with some walks on the lovely trails both here on Brae Island as well as on the Fort Langley side of the Fraser River.  Unfortunately, the weather has been so crappy...what an awful spring the west coast has been having!  We’ve gotten out to enjoy the area as much as possible...quite often having to bundle up in layers and carry our umbrellas...oh, how I yearn for shorts, tank tops and flip flops! 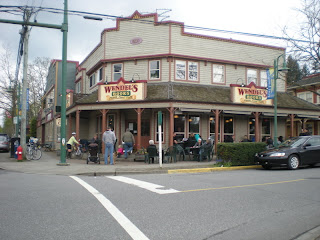 I was spoiled on Mother’s Day...Steve served me coffee (including refills) and then suggested we go out for brunch.  But first, we had our exercises to do...well....okay then.  So after a relaxing start to the day enjoying our coffee, we did our exercises, showered and then walked into Fort Langley.    We had brunch at Wendels’s Book Store and Cafe...a very popular spot!  We decided to sit at a table outside...the sun had made an appearance when this decision was made but it didn’t stay out long.  It was a little cool sitting outside but not really bad...besides the place was so busy (both inside and out) that I don’t think we would have gotten a table inside even if we had wanted to.  Once back home, we spent some time getting the truck ready to go into ITB the next day...off-loaded the boat as well as Steve’s ATV (closest to the front of the truck box) so that the leaking vents could be fixed.  The truck looks funny without the boat on top...very "utility-looking"...we must get some graphics on it to match the 5th wheel...
(Click on pictures to enlarge) 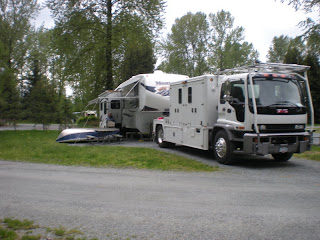 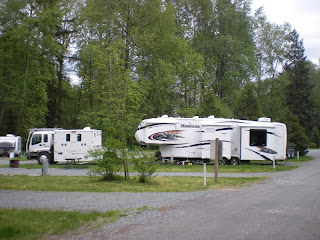 We were up bright and early Monday morning so that we could drop the truck off at ITB (Intercontinental Truck Bodies) at 7:30.  They would have the truck for a couple of days so we took a taxi back to the campground.  Later on that afternoon, we decided to get out for some exercise so with umbrellas in hand, we took the trail to Tavistock Point here in the park...it took us almost an hour round trip. 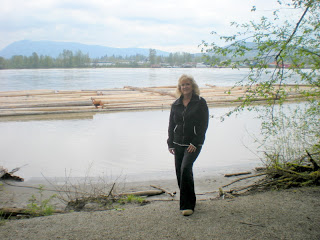 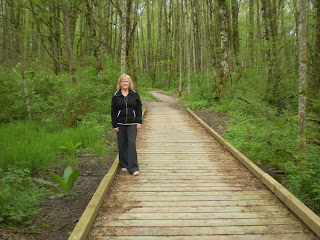 The Canucks were playing the Nashville Predators in game 5 of the playoffs that night so we thought it would be fun to experience a playoff game in the local pub.  We thought we should get to The Fort Pub early to get a good table so we arrived there at 4pm...an hour before the game started.  Well...it turned out that it didn’t get busy until after the game started so we basically had an extra hour of drinking beer than was necessary....oh well...  The Canucks were successful in knocking the Predators out of the playoffs...Yay, Canucks!...and after too much beer and too much food, we walked back to the campground.  We had had a fun evening but were a little disappointed that the crowd wasn’t as enthusiastic in cheering on the Canucks as we had hoped.
We each had our own TV to watch... 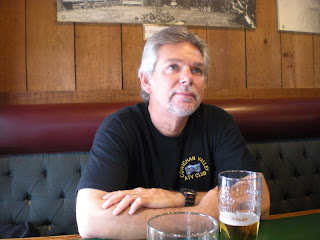 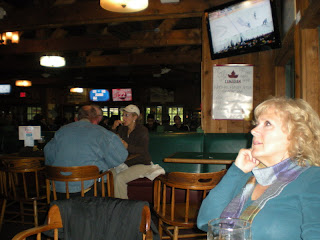 Tuesday was a cloudy cool day and we didn’t seem to have much energy...gee, I wonder why?  But we did manage a walk into Fort Langley and back.   This heritage building now houses a medical office...and it's right next to a cemetery...hmmm... 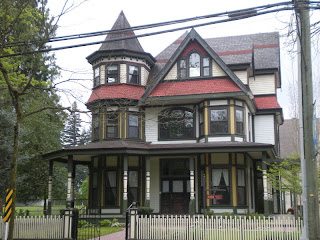 We woke up to rain Wednesday morning...it had actually started in the wee hours...and it just poured and poured all day.  ITB had delivered the truck to Gold Key Izuzu (used to be GMC) for us this morning for the flow switch to be replaced again (this is the 3rd time).  They were also going to replace the steering pump that was foaming the hydraulic fluid in cold weather...we’re just wondering if the flow switch problem is connected somehow to the faulty pump seal.  At least it is all warranty work.  After lunch we took a taxi to Gold Key to pick the truck up only to find that the pump hadn’t been done yet because they did not have the right tool to disconnect the line...so the truck would have to go back in once the specialized tool arrives...figures!


Thursday, we were up early again to take the truck into Vancouver Axle & Frame to have the front-end suspension lightened up.  Before we had gone over to the Island for 5 weeks, we had stopped there and discussed what we wanted done so we thought it was just a matter of taking it in and having it done.  Well, of course, it can’t be that easy...what we thought they were going to do wouldn’t give us a better ride.  Instead, they suggested that we have an air assist system installed in the front-end (similar to what is done in Class A motorhomes).  Well, why the heck hadn’t they suggest that when we had first stopped in?  Now, the parts would have to be ordered in.  Luckily, the kit was only coming from Calgary so they would be able to do it next Monday and Tuesday.  Good thing that we have had to extend our stay here in the lower mainland! 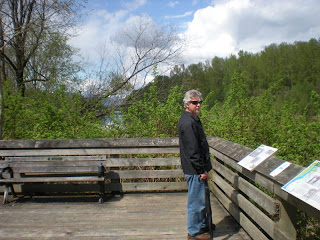 That afternoon we went on a long walk on the Fort-to-Fort Trail which is on the Fort Langley side of the river.  The clouds had been breaking up with the sun peaking through occasionally but we still decided we had better take our umbrellas along with us.  After almost an hour and half we were back home tired, hot and thirsty.  The sun was out as we got home so after getting some water we decided to sit outside...yeah, right...of course that was the end of the sun as another big dark cloud covered it. 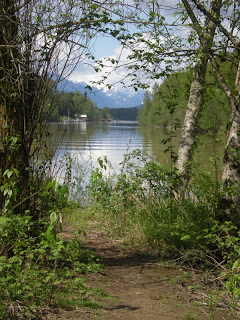 Brae Island on the Fraser River where we are camping. 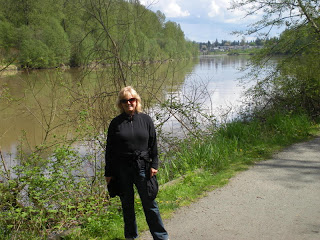 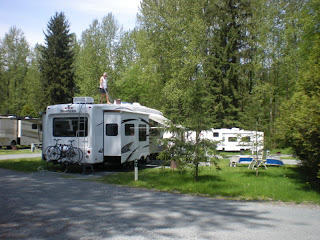 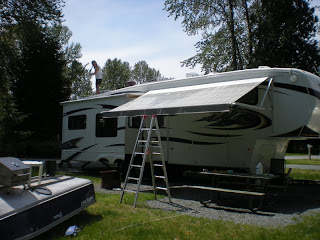 Friday was an absolutely gorgeous day!  It was the first time in a long while since we had had our shorts on.  Steve decided to take advantage of the nice weather to start the arduous task of washing the trailer—he figured he’d break it down into a couple of days.  Today his plan was to wash the roof and awnings—it hadn’t been washed since we were in San Antonio, Texas and was pretty dirty.  I was going to tackle the laundry.  So today ended up being a work day for us.  By late afternoon, Steve had actually washed a good portion of the trailer...leaving less to do tomorrow.  I had helped out by being the “hose-lady”, spraying the soap suds away...oh, I also squeegee’d the windows to prevent water marks.  By 4:00 it was time to relax in our chairs and enjoy happy hour in the sunshine...something we hadn’t done for a long time.
We watched as the weekend campers arrived...there is a “small trailer” rally (Boler, Scamper, etc.) here this weekend...over 24 of these tiny homes on wheels arrived. 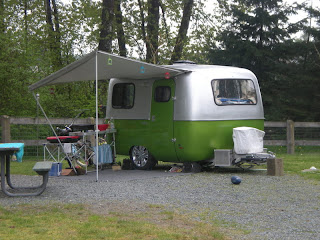 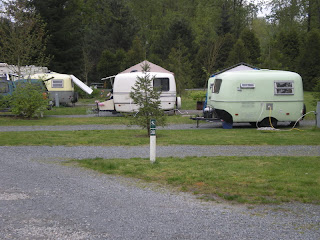 Such crazy weather this Spring...we get one absolutely gorgeous day and that’s it!  Today, we woke up to cloudy skies again...and it had been raining through the night.  After coffee and a quick breakfast, Steve was out to finish washing the trailer...hoping to get it finished before the rain set in.  I was out shortly after him, again playing “hose-lady” (no comments please!).  After a couple of hours...along with intermittent sprinkles of rain, it was all finished.
We drove into Coquitlam for dinner at the Cactus Club...a bit of a family gathering with some of “the Oaks clan”—Bev, Cheryl and Glenna.  Chris and Sheannie also joined us...baring gifts from their recent trip to Cuba (coffee for me and a cigar for Steve).  We had a great visit...wonderful seeing them all!  We were borrowing Chris’ car for the week so I drove it home...whoa...sure different driving a low sports car compared to the truck...I felt like I was sitting on the ground! 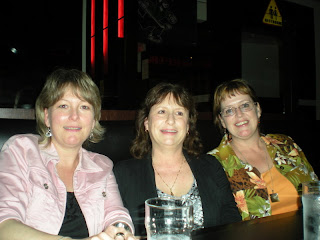 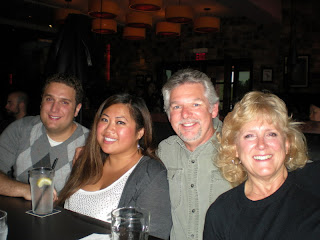 (Chris, Sheannie, Steve and Moi)
So that is basically our week in a nutshell.  I likely won’t start daily entries until we “hit the road” again.
Posted by Dianne and Steve at 9:03 AM