We had a good sleep last night, which surprised me...I was expecting more noise being in a casino parking lot. But I guess we were far enough away from the main parking lot. After quick showers, we walked over to the casino for breakfast. No breakfast buffet this morning...that would be just too much food. Instead we enjoyed an excellent breakfast in the lovely Cedars Cafe.

After preparing the inside, we put the sliders in and were on our way. Since we were heading to Fort Langley, Serena took us on a bit of a different route than we are used to when we cross the border into Canada. We exited the I-5 on the northern side of Bellingham and headed to the Lynden Border Crossing. We had never been that route before.

We made our last fuel stop in the US at $4.20 per/gal and after stopping at the duty free store, we were in the line up at the border crossing. It’s a much smaller crossing than the Peace Arch and we were across in no time. Okay...now we have to get used to kilometres and celsius again! 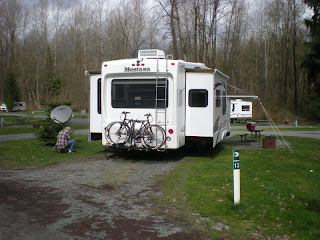 We arrived at Fort Camping at Brae Island Regional Park in Fort Langley just before noon. This is a return visit for us...as it was our starting point last July before we started our trip east. I believe we were even given the same pull-through site we had back then. The sun actually came out as we were getting set up. So nice to see a break in all the clouds! For some reason, we could not find a satellite signal so after patiently trying for some time, Steve finally gave up and put the dish away. Too many trees. There is cable here anyway so he’ll hook that up instead. Since we will be putting the 5th wheel into storage on Sunday when we go over to Victoria for a few weeks, I suspended our ShawDirect subscription online. I sure like being able to do that! 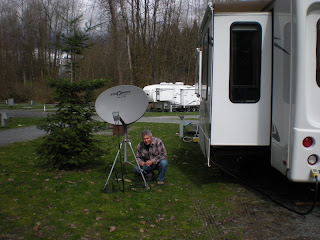 Steve made a couple of phone calls trying to decide where to take the ATV’s in for their second servicing...should we have it done here or wait until we are over on the Island? He decided to take them in here so that we are good to go in case our club has a ride next weekend. We headed to Western Power Sports in Langley to drop them off. They will get their rather expensive check-up and be ready for pick up either late tomorrow afternoon or Saturday.

It was after 5:30 by the time we got home. After burgers for dinner, we spent the rest of the evening watching TV. It’s good to be back in Canada, eh!
Posted by Dianne and Steve