We woke up Sunday morning to no power...hmmm...that's odd. Thinking that the park had a power failure, Steve went outside to check. Nope...our 50 amp Surge Guard Voltage Regulator was still lit up so power was on and the breaker hadn't tripped on the 30 amp power pedestal. So he came inside and checked the breaker panel in our RV...none had tripped. Next he checked the inverter/charger display panel and the fault code LED was still off. We had left the inverter disengaged because we have been running our fireplace and electric heater and in case of a power failure while sleeping didn't want the inverter powering those and running the batteries down. Steve engaged the inverter and we had power so that part was working. Then he checked the troubleshooting section in the inverter manual but it only listed fault codes...none were listed on our display so that was no help. There was a section showing how to do a reset by doing a hard reboot on the inverter. When he held that button down for 3 seconds the inverter fan and all 3 LED's lit up then immediately turned off. He tried it a couple of more times with the same result. Back inside he engaged the inverter but it was no longer working...WT? He tried phoning Xantrex Tech Support, but being a Sunday and COVID-19 shutting things down there was no answer. Then he tried contacting the mobile RV tech we've used in the past but they don't work on Sundays so he looked up another online and he doesn't work Sundays either...Geez! Our only option was to hook up our 50' extension cord and run it through a window to the power bar for our TV and receivers. However while running the extension cord he noticed the 50/30 amp pigtail adapter from the 50 amp RV inlet connection and the 30 amp cord connector were burnt. 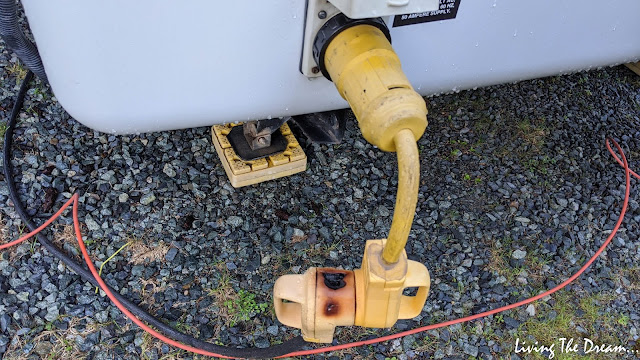 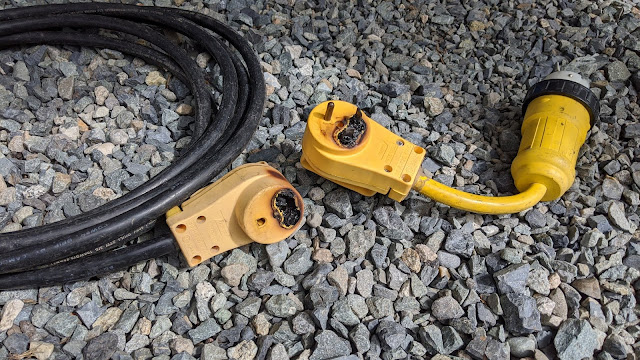 Electrical guru Earl later told Steve that it was probably a slow heat buildup that eventually opened the circuit and that's why none of the circuit breakers tripped. So Steve hooked up our 50 amp cord to the 50/30 amp pigtail adapter to the 30 amp power pedestal and once our "hard wired" 50 amp Surge Guard power protection unit did it's 128 second reset delay we heard it click in but still no  power!! Back to running the extension cord. Steve also turned on our solar system so our batteries will charge. For heat we hooked up our propane heater to one of our 30 lb tanks outside a window.

We got out for 2 walks today and with the sun going in and out all day, we managed a little time sitting outside reading.

Monday (March 30) we woke in the wee hours to wind and rain...and ended up getting up at 3:40 a.m. to put the awning in. Unfortunately, neither one of us had a good sleep after that...Steve's mind was racing wondering what the day would bring with our power issue.

After leaving a message with Paul's Mobile RV Service yesterday, Steve sent a text today...we were desperate to get some power! Dan from Paul's eventually called us and arrived just before 11:00.  Steve explained all he had done and checked. Dan grabbed his multi meter and checked the power coming from our 50 amp cord...all good so he plugged it into the RV. After the Surge Guard completed it's 128 second reset delay we heard it click in. Dan checked the DC power on the inverter and it was still charging the batteries. Next he checked the 120V input terminals and that was good but the 120V output had nothing and the inverter still wouldn't invert. I had him call Xantrex Tech Support and after Dan explained everything he had done they recommended taking the unit into a service centre. Luckily there is one in town and we still have 3 months left on the warranty, however they weren't answering their phones. Dan got us power by disconnecting the 120V and bypassing the inverter. Hopefully we can eventually get through to the service centre.

Jack and Fay, RV friends that we met in Quartzsite a few years ago, stay here at Peace Arch RV Park in the summer. They were through their 14-day self isolation so offered to pick up our grocery order this afternoon. Thanks so much Jack and Fay...very much appreciated! 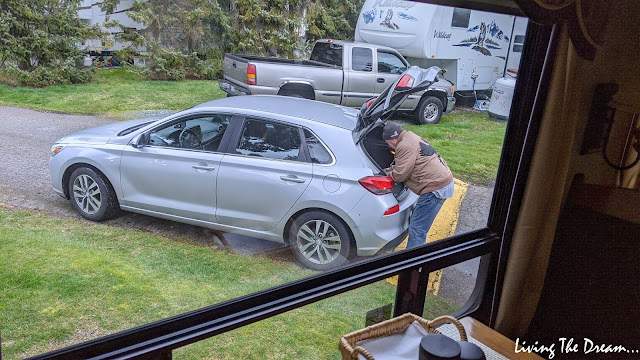 After wiping everything down with disinfecting wipes, and putting it away, we got out for our usual daily walk.

Finally having our groceries replenished, Tuesday (March 21) morning I made some of my keto muffins while Steve tried phoning the service centre Pacific Yacht Systems with no luck. He decided to send them an email instead on their contact page. After lunch, we had our walk around the campground and then sat outside in the sunshine.

Wednesday (April 1), we woke early to the sound of rain on the roof...we got up at 5:30 to a chilly trailer. It was a cool 2C/35F...as a matter of fact outside, it has been a pretty chilly week. The heater has basically been going non-stop and we are being charged for electric.

Steve got a response from Pacific Yacht Systems saying they were open and apologized about not being able to get through by phone and wanted more info. Because of the COVID-19 Steve has decided to take a wait and see attitude before taking it in.

The rain eventually stopped and the sun came out...time for our daily walk. Not long after getting back, the clouds moved in again along with more rain.

Thursday (April 2) morning we had some sleet and very light snow. It didn't stick...but there was definitely white stuff falling from the sky!

Another exciting day, LOL...Steve watched TV and I spent a lot of time grocery shopping online. The websites are so busy that I finally gave up...I will try again later.

Friday (April 3)...freedom day! We are finished our 14-day self isolation. However, we don't really see our daily routines changing much. But we are now able to go out shopping, etc..."if essential"...of course, we have to maintain a 2 metre/6 foot distance between ourselves and others. Otherwise they are asking everyone to stay home.

We headed out late morning...our destination, a BC Liquor Store. They are considered an essential service (of course!). We tried to get delivery from the beer and wine stores but they all use Skip The Dishes, and for some strange reason, which the person on the phone couldn't explain, was they won't deliver to an RV Park...only to houses and apartments! Steve offered to go in but I said it would be better if I did because this was our first trip to the liquor store since being back in BC and I had to re-acquaint myself with the wine brands and I wanted some Tequila. So off I went with my bandana on my face and hand sanitizer in my pocket . They only allow 10 people in the store at one time, so you have a line up queue outside with markers indicating the 2 metre safe distance. The line goes quickly because everyone just gets in, gets what they want and then out. I found everything I was after...and after the usual shock of BC liquor prices compared to what we had been used to in Arizona, I was on my way back out to the truck. We doubled our order so we only have to return half as much:)

Not wanting to go directly home, we went to nearby White Rock for a drive along the waterfront. The sun had come out and it was beautiful!

The White Rock Pier...they have actually closed down the pier and all parking along the waterfront because so many people were out walking and not obeying the 2 metre/6 foot physical distancing. 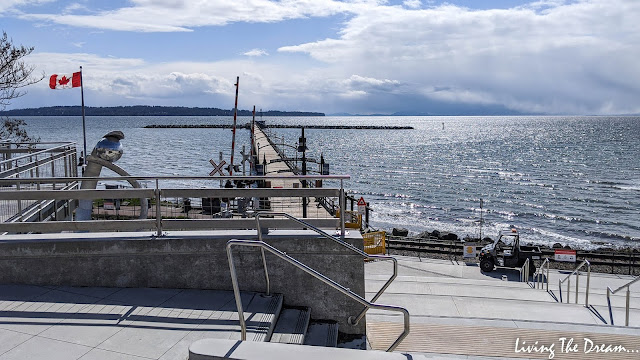 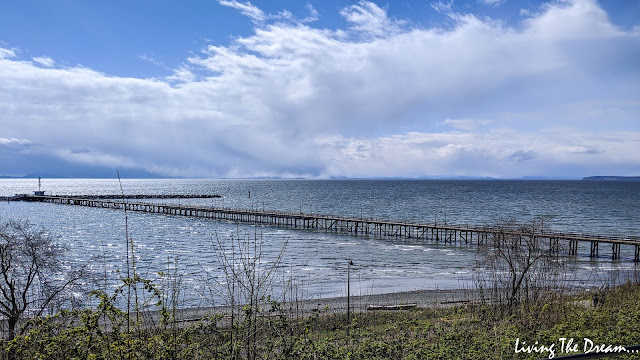 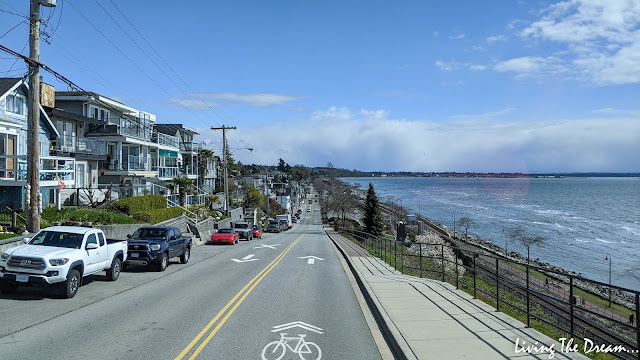 We had a wonderful video chat with our youngest son, Chris, his wife, Angela...and our grandson, Issac. The next best thing to seeing them in person!

Saturday (April 4) was back to our usual uneventful days...walks, reading and watching TV. We did have more wonderful video chats with family...awesome to be able to stay in touch virtually! Sure makes this "stay at home" order more bearable!

And that concludes our second week back home in BC...

Posted by Dianne and Steve at 2:13 PM