Our final week here at Fort Langley sped by just as the previous ones have.  Tuesday, after the long weekend, was a very quiet day...it rained, rained...and then rained more...so we basically hunkered down inside all day.

Wednesday, May 22, was our wedding anniversary...31 years!  How about that?!  We were waiting for a package to arrive via Purolator so we had to hang around until it arrived. The package contained my new camera!  Yes, another new camera!  This one is dust proof, shock proof, crush proof...and...yes...wine proof!  After much research, Steve decided the Olympus TG-2 iHS should fit the bill!

We had also arranged for Budget Blind Service to come out and fix two of our day/night shades...unfortunately, they had to take them back to their shop to re-string, but they were back and reinstalled the next day.

The camera arrived shortly after 3:30...as it turned out, they signed for the package at the park office and delivered it to us.  Thanks Shannon!

At 4:00 we headed out to Abbotsford...Esther and Paul had invited us out to their place for dinner.  On our way, we stopped at Fraserway RV so Steve could pop in and ask them if they could weld a bolt onto our bike rack receiver.  We will be stopping there on May 29th when we leave. 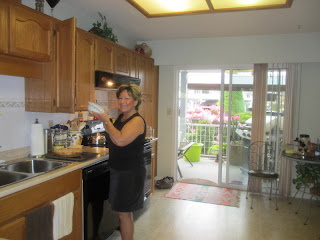 Esther and Paul met us, showed where we could park the truck, and then walked us to their lovely townhouse.  Here is Esther preparing in the kitchen...


...and Steve and Paul chatting in the living room... 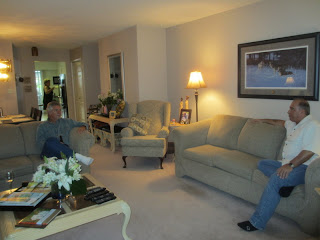 Time to sit down for dinner... 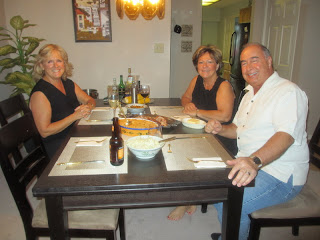 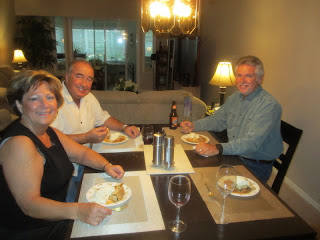 After a fabulous dinner, we retreated to the comfy living room furniture to relax and chat a bit before it was time to say goodnight.  After hugs and handshakes, we thanked Esther and Paul for a lovely evening...it was really great seeing them again! 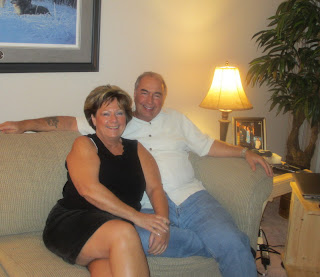 We really didn't do much Thursday and Friday...we made a trip into Langley.  Steve went into BestBuy to get a memory card and case for our new camera, while I popped into Walmart for a few things. 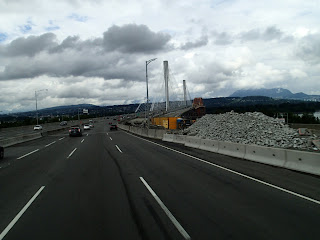 Saturday we drove into Coquitlam to meet Glenna (Steve's cousin-in-law and one of my best buds) for lunch.  Chris and Angela joined us...YES...did it!  We have seen Chris all four weekends that we are here!  Driving into Coquitlam involved going over the new Port Mann Bridge... 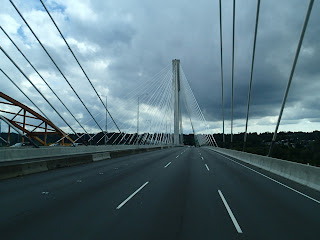 Here we are at Cactus Club Café... 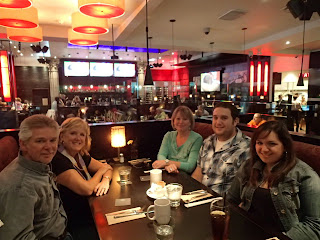 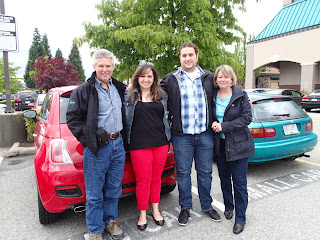 ...and Steve, Angela, Chris and Glenna after a lovely 2 hour lunch.  So good catching up...poor Glenna has been very sick...for 5 weeks!  Started off with a fever, then onto bronchitis and then a super-duper head cold...poor thing!  But she is doing much better now, thank goodness.  After big hugs, we all said our goodbyes...see you in September!

Saturday night, we decided to have a "real" campfire.  Theo and Lauralee had left us some firewood when they left a couple of weeks ago and tonight was the night to burn it! 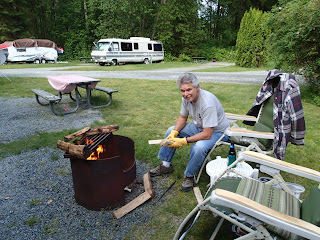 Our plan for the last few days in Fort Langley was to give the fifth-wheel a good cleaning...well, of course, the weather did not co-operate.  It absolutely poured out ALL day Sunday so first thing Monday, when we woke to cloudy but dry skies, Steve headed out to get started on washing the trailer.  I worked on the inside...giving it a good cleaning.  Unfortunately, the rain started around noon and no where being finished, Steve donned his rain gear and continued. 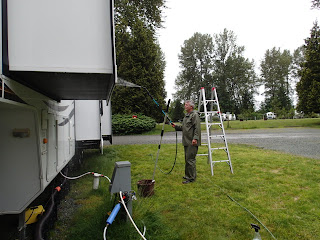 After I finished what I had planned to do inside, I decided to walk into Fort Langley.  While I was gone, another parcel that we had been waiting for arrived...the new satellite dish and LNB.  Thank goodness...we were getting concerned they wouldn't arrive before we left...whew! The old dish has blown over a few times and was damaged...the LNB was being held together with a zap strap and duct tape.

Today (Tuesday) was another busy day as we get ready to leave tomorrow.  I did up four loads of laundry while Steve got started on flushing the fresh water tank.  After adding some bleach, he filled it up and then let it sit for 4 hours.  While doing that, he also flushed the black water tank.  Of course, the rain started...and it really poured out late afternoon...sheesh...sure hope it's not doing this tomorrow morning when we have to pack up and head out!